When an organization decides to hire a factor of production, it makes comparison between MRP of the factor with that of its Marginal Factor Cost (MFC).

If the MRP is greater than the marginal cost of factor (MRP>MC), then the factor is employed because it would generate more marginal revenue.

In the factor market, under perfect competition, an individual organization cannot affect the prices of a factor of production by increasing or decreasing its consumption.

For example, in perfect competition, organizations need to pay wages to its employees according to the wage rates prevailing in the market. Similarly, if we look upon the supply side, a single supplier does not have ample amount of products to meet the demand of all the customers in the market. Therefore, in perfect competition, marginal product (MP) and average product (AP) are same and their curves would intersect each other. Thus, MP and AP would form a straight horizontal line. Here, we would again take the example of labor and wages to understand equilibrium in factor market under perfect competition.

Figure-5 shows the equilibrium in the factor market under perfect competition: 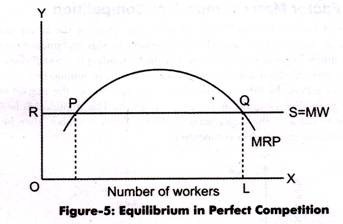 In Figure-5, we have assumed labor as a variable factor, while keeping the other factors at constant. The RS line shows the marginal wage rate. In the factor market, all organizations can hire any number of workers at the prevailing price OR. The MRP curve of labor intersects the line RS at two points P and Q.

In summation, there are two conditions required for attaining equilibrium in the factor market under perfect competition, which are as follows:

ii. MRP curve intersects marginal cost from above (as shown in Figure-5)

However, from Figure-5, we cannot determine whether the organization would earn profit or incur loss.

This can be determined with the help of Figure-6: 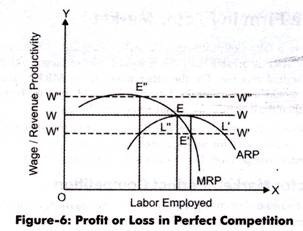 In the long run, supernormal profit attracts new organizations to enter the market. This increases the demand for labor; therefore, the wage level of labor also increases and reaches OW. At OW wage level, the equilibrium shifts to E and supernormal profit disappears. This is because wages are equal to average revenue productivity.

However, at equilibrium point E”, the wages are more than the average revenue productivity. In such a case, the organization would incur losses. In case of losses, many organizations would leave the market, which would result in the reduction of labor and wage rates. This again brought the wage level at OW and equilibrium point at E. At this point, MRP would become equal to ARP.

Therefore, the single buyer has a control on the price of factors. This implies that he/she can bargain for the prices of factors as per his/her choice. For example, if the buyer wants to hire a factor say labor, then he/she can set wages according to him/her. 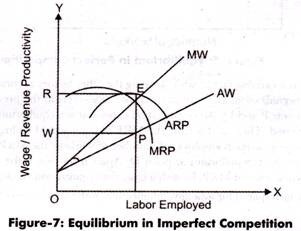 In Figure-7, Average Wage (AW) curve moves from left to right in upward direction and Marginal Wage (MW) curve is above the AW curve. In imperfect competition, equilibrium can be attained when MW is equal to MRP. In present case, equilibrium is at point E.

In imperfect competition, as the buyer has the power to decide the wages of labor; therefore, labor is exploited in this type of market structure. For example, in case of oligopoly or monopoly, the number of job opportunities is limited and the unemployment is high. In such cases, the labor is ready to work even at low wage rates.

Factor of Production: Demand and Supply
Difference between Nominal Wages and Real Wages