In this article we will discuss about the relationship between the short run and long run average cost curve.

But, once a particular firm size is chosen and the firm starts producing, the firm is in the short run. Plant and equipment have already been constructed. Now, if the firm wishes to change its level of output it cannot vary the usage of all inputs. Some inputs, the plant and so forth, are fixed to the firm. Thus, the firm cannot vary all inputs optimally and therefore cannot produce this new level of output at the lowest possi­ble cost.

Such a situation is shown in Fig. 13 — LRTC is the firm’s long- run total cost curve. Suppose that, when making its plans, the firm had decided that it wanted to pro­duce Q0 units of output at the low­est possible cost, which is shown as TC0 in the figure. Since it would not wish to vary any of its inputs so long as it continues to produce Q0, the short-run cost of producing Q0 is the same as the long-run cost. 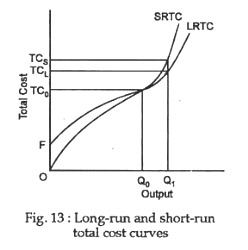 Thus, the short-run total cost curve, SRTC, is tangent to LRTC at Q0. But, .since some inputs are fixed in the short run, it cannot produce the new output at the lowest possible cost. At any output other than Q0, the short-run input combination is less efficient—would result in a higher cost—than the combination that would be chosen if all inputs were variable.

Suppose, for example, that the firm wants to increase its output from Q0 to Q1. If all inputs were variable, it could produce this new output at TCL. But its plant and some other inputs are fixed; so SRTC gives the cost of producing Q1. This cost is TCS, which is clearly higher than TCL. The fixed cost is F and the variable cost is TCS—F. Clearly, from Fig.13, SRTC is higher than LRTC at any output other than Q0. Only at output Q0 are the two curves equal.

Three short-run situ­ations are indicated by the three sets of curves: 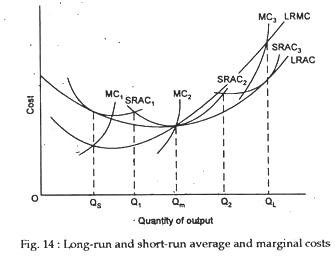 SRAC3 and MC3 show another short-run situation—a different plant size. Here tangency occurs at QL on the increasing part of LRAC. Thus, SRAC3 is increasing at this point also. Again the two marginal curves are equal at QL, and MC3 crosses SRAC3 at the minimum point of the latter.

If the firm is limited to producing only with one of the three short-run cost structures shown in Fig.2, it would choose the cost structure—plant size—given by SRAC1 to produce outputs from zero to Q1, because the average cost, and hence the total cost of producing each output over this range, is lower under this cost specification. 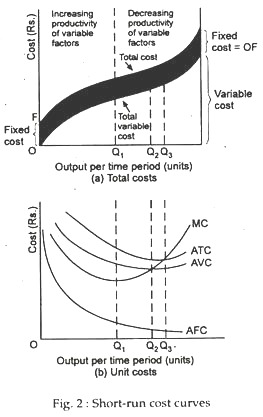 If it wishes to produce any output between Q1 and Q2, it would choose the plant size given by SRAC2. This average cost curve lies below either of the other two for any output over this range. It would choose the cost structure shown by SRAC3 for any level of output greater than Q2.

But, typically the firm is not limited to three sizes — large, medium or small. In the long run it can build the plant whose size leads to lowest average cost. The long-run average cost curve is a planning device, because this curve shows the least cost of producing each possible output. Managers therefore are normally faced with a choice among a wide variety of plant sizes.