In this article we will discuss about the budget equation and the budget line by consumers.

Therefore, the points on the former curve are strictly preferred to the points on the latter curve. The consumer would always want to climb up on a higher IC because then he would be able to obtain a higher level of utility. But the real world consumer is constrained by his income or budget.

His income may not permit him to climb on the ICs beyond a certain height. The consumer’s income and the prices of the goods together give us the budget constraint of the consumer, and his budget is as important as his preference-indifference pattern in the determination of his behaviour in the market.

The Assumptions of Budget Equation and the Budget Line:

While discussing the budget of the consumer, for the present, assume the following:

(i) The prices of the two goods (X and Y) have been determined in the market, and they are given and constant for the consumer.

(ii) The consumer has a fixed amount of money income to spend on the two goods.

(iii) Both the goods are MIBs.

(v) He spends all his money on the goods because of (iii) and (iv).

(vi) He can purchase any combination of the goods if his budget permits, i.e., there are no (absolutely) maximum limits on the purchase of the goods.

The above assumptions would lead to the properties of the budget equation and the budget line of the consumer.

Suppose that the consumer’s money income is denoted by M and the prices of the goods are given to be px and py.

is known as his budget equation.

As is evident from (6.14), the budget equation is linear in

M̅, x and y, px and py being given and constant. Now, assume that the consumer’s money income is fixed at M, then from his budget equation (6.14), is known as his budget line.

The equation of the budget line would be:

Since M̅, px and py are constants, (6.15) is a linear equation in x and y, i.e., it is the equation of a straight line in a two dimensional commodity space. The budget line gives us the combinations of x and y that the consumer can purchase with his fixed money income M.

It may be noted that equation (6.14) represents a family of parallel budget lines. Because, at each value of M, a separate budget line from this equation and the slope of each such budget line, is −px/py = constant (px and py remain constant).

The equation of the budget line is:

The features of this line are:

(i) It is a straight line in the commodity space, since it is a linear equation in x and y.

(iii) The intercept form of the budget line is:

(iv) Since M̅, px and py are given, can immediately know the intercepts M̅/px and M̅/ py, and is also know the meeting points of the budget line with the x-axis and y- axis. These points would be (M̅/px, 0) and (0, M̅/py) respectively.

Table 6.1 Some of the Combinations of Goods that Lie on the Budget Line in Fig. 6.6 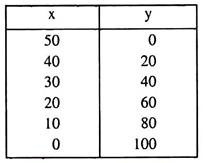 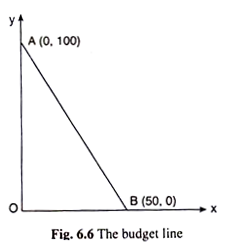