In this article we will discuss about the shift and rotation of the budget line, explained with the help of a suitable diagram.

In the indifference curve theory, it is assumed that the consumer purchases and consumes only two goods (here X and Y). If the prices of goods X and Y, and the money income of the consumer is given, then the equation of the budget line of the consumer would be

The slope of the budget line (6.15) is –px/py = negative, and x-and y-intercept of the line are M/px and M/py, respectively.

Now suppose, initially the values of M, px and py are such that the budget line of the consumer has been obtained to be a line like L1M1 in Fig. 6.7. 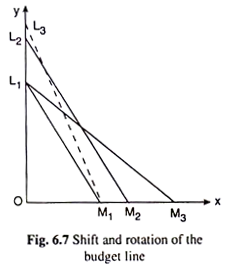 If now the money income (M) of the consumer rises, px and py remaining unchanged, then, the slope (-px/py) of his budget line remaining constant, the intercepts of the line (M/px and M/py) would increase.

On the other hand, if the money income of the consumer remaining constant, the price of one of the goods changes, then it is known as the “rotation of the budget line”. For example, suppose, initially, the consumer’s budget line is L1M1 in Fig. 6.7.

Now if the money income (M) of the consumer and the price of good Y remaining unchanged, the price of good X diminishes, then the y- intercept of the budget line (M̅/py) remains constant at OL1, but the x-intercept (M̅/px) increases from OM1 to, say, OM3.