Read this article to learn about the fundamental relations among money wage, real wage and employment.

The classical theory of employment is based upon certain fundamental relations and assumptions relating to money wages, real wages, and the system of wage rate adjustment.

Under this system, money wage, real wage, and employment are uniquely related. There is a direct relation between real wages and money wages, as the labour’s demand is primarily a demand for real wage and not for money wage.

It would be of great use to understand that both classicals and Keynes agreed that real wages stood reduced as employment increased but they differed as regards as mechanism and the way reduction in wages was to be sought. According to classicals, if the wages are flexible, there would be no unemployment as the real wages fall and rise with corresponding variation in the marginal productivity of labour and when workers refuse to accept a wage which corresponds to their marginal productivity, there may be unemployment, but its nature would be essentially voluntary.

Keynes defined involuntary unemployment as that unemployment which could be done away with by cuts in real wage rates. Thus, the whole question of the connection between money wages and real wages is a more complicated one than has hitherto been supposed, and the correct answer seems to be that no single generalization about the connection between them holds true of all situations.

The simple and obvious classical theory of employment is based on two fundamental postulates— the first is that “wage is equal to the marginal product of labour.” Accepting the law of Diminishing Marginal Productivity as employment increases, any increase in employment is necessarily associated with lower real wage rates in equilibrium conditions. If, however, the unemployment still persists, it must be due to the refusal of the workers to accept the lower real wage rate which corresponds to the marginal product of their labour.

The second postulate of the classical theory is that “the existing real wage is equal to the marginal disutility of employment,” i.e., “the utility of the wage when a given volume of labour is employed is equal to the marginal disutility of the amount of employment”. “That is to say, the real wage of an employed person is that which is just sufficient (in the estimation of employed persons themselves) to induce the volume of labour actually employed to be forthcoming. Disutility must be taken to cover every kind of reason which might lead a man, or a body of men, to withhold their labour rather than accept a wage which had to them a utility below a certain minimum.”

This postulate implies that workers’ demand is essentially for real wage and not for money wage and the relationship between them is direct. The second postulate gives the supply schedule for various amounts of employment forthcoming at different real wage rates (W/P), while the first postulate gives the demand schedule for employment. “The amount of employment is fixed at the point where the utility of the marginal product balances the disutility of the marginal employment.”

It is based on the following relations and assumptions:

(iii) There are no imperfections of institutional rigidities in the labour market, i.e., labour is perfectly mobile.

(iv) Aggregate demand (for goods and services) remains constant and no changes are anticipated.

A firm in a competitive industry will hire workers upto the point where the value of marginal product (marginal product multiplied by the price of output) just equals the cost of the factor. Assuming that the pure competition prevails, the profit maximization condition of the economy as a whole may be written as: W = PXn or W/P = Xn; where W is the money wage rate, PXn is the level of prices. W/P is the real wage rate, and Xn is the marginal physical product of labour. The demand for labour, therefore, may be written as: Nd – D(W/P); which states that the demand for labour is a function of the real wage rate. According to the law of Diminishing Marginal Returns, the marginal product of labour declines as more workers are hired.

It follows that if the level of employment is to be increased, the real wage must fall. The demand for labour is, therefore, a decreasing function of the real wage rate. If an individual feels better off when both wages and price double, he is said to be subject to “money illusion.” In the absence of money illusion a change in the quantity of labour supplied will take place only if the real wage changes. Consequently, the classical labour supply function may be written as: Ns = S(W/P).

(a) W/P i.e., the average money wage deflated by price level is shown on the vertical axis, horizontal axis measures the various amounts of employment or N.

(c) When the wage rate is (W/P)1 the system is in disequilibrium, inasmuch as there is unemployment equal to the horizontal distance between h and K, so that workers bid down money wages, relatively to prices to the level of (W/P)0, eliminating unemployment measure by hk. At the real wage rate (W/P)1 the quantity of labour demanded is On, while workers offer On unit of labour. It means there is excess supply of labour to the extent of nn’ When more workers are willing to work at the going real wage rate than business is willing to hire, we have involuntary unemployment. Should the real wages fall to (W/P)0, involuntary unemployment will disappear.

Hence, on the basis of above definitions, relations and assumptions, the theorem are advanced that unemployment is considered incompatible with equilibrium. Such is the self-adjusting classified system of automatic full employment equilibrium. It is therefore, clear that during the pre-Keynesian era when classical theories held away, employment problem was never taken so seriously. The state of full employment was considered as a normal feature of the economy, and lapse from it being taken as frictional, temporary, and originating from the imperfections of the market. 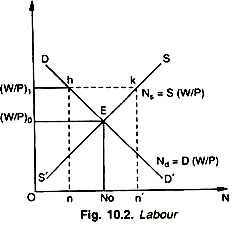 Since “supply creates its own demand”, it was presumed on the basis of Say’s Law that the demand must be equal to supply and the system would be self-adjusting and self-correcting, only if the workers were prepared to accept a cut in real wage rates. These classical conclusions, according to Keynes, apply to the whole body of labour in the economy and not just to the amount of labour employed by a firm or industry.