Trade Union Powers to Secure Increases in Wage and Employment and to Eliminate Monopsonistic Exploitation of Labour:

The last goal, perhaps, is the most desirable for the unions. However, exactly what kind of gain the trade unions will be able to secure for their members would depend upon the organi­sation of the labour market.

If the workers in this market are unionized, and if the union dictates a wage rate, say, Wu, which is higher than the demand-supply equilibrium wage rate = W̅, then the union at the same time would be ready to supply any amount of labour at W = Wu, which is less than or equal to WUSU, because the labour supply curve indicates that a maximum of WUSU of labour would be available at W = Wu. Also, to obtain a supply of labour greater than WUSU, the rate of wage would have to go up accordingly along the SL curve. 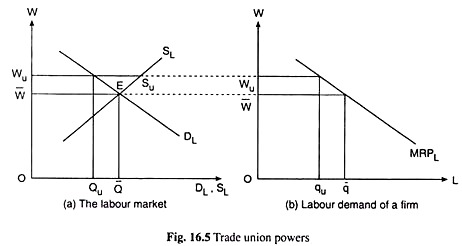 In other words, at the rate of wage, Wu, dictated by the union, the labour supply curve would be perfectly elastic, i.e., it would be a horizontal straight line for 0 < SL < Wu Su, and it would be the positively sloped curve SL for SL > WUSU. That is, here the supply curve of labour would be a curve in two parts.

The first part of this curve would be a horizontal straight line like WUSU in Fig. 16.5(a), then the curve would have a kink at the point Su to become positively sloped like the segment SUSL. Let us remember that the horizontal segment, viz., WUSU, of the SL curve here is the average expense for labour (AEL) curve and, at the same time, it is the marginal expense for labour (MEL) curve because of the average-marginal relation.

In order to know about the powers of the trade union, let us first suppose that the labour market is perfectly competitive, i.e., the number of buyers and sellers of labour is large and they are unorganised. The situation is shown in Fig. 16.5(a) where the DL and SL curves are the demand and supply curves for labour.

Let us now suppose that the labour market is unionized and the union demands a rate of wage W = Wu > W̅. The supply curve of labour now becomes WUSUSL with a kink at the point Su, and the horizontal segment WUSU is now an AEL = MEL segment.

We have obtained, thus, that if the labour is unionized in an erstwhile competitive labour market, wages would increase with an accompanying decline in employment. Under the circumstances, we have the following to say about the benefits or otherwise that the trade union might achieve for the workers.

If the demand for labour is relatively inelastic (e < 1), then, as we know, the rise in W would be accompanied by a rise in the firm’s total expense for labour. In this case, although employ­ment has declined, the total wage bill of the workers will increase. If the union could somehow divide equitably the earnings of Qu employed workers among the Q̅ potential workers, then all the Q̅ workers might benefit.

However, if the demand for labour is relatively elastic (e > 1), then a rise in W caused by the union will result in a fall in employment accompanied by a fall in the total wage bill. Therefore, now the union would not be able to compensate the W̅ – Wu workers who are unemployed because of the rise in W. Thus, in a perfectly competitive labour market, unionization of the workers is not an unmitigated blessing. 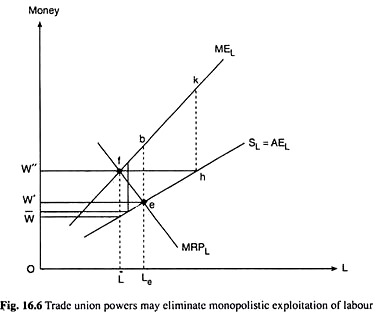 At this point, the wage rate will be W̅ and the equilibrium quantity of labour demanded will be L. Here since W̅ < MRPL, there would be full-length monopsonistic exploitation of labour of the total vertical gap between the MEL and AEL functions—this vertical gap, it may be remembered, is due to the existence of monopsony in the labour market.

Let us now suppose that the workers organise themselves in a union that would bargain collectively on their behalf with the monopsonist. We shall see now what may be the rational policies of the union to conduct collective bargaining. At one extreme, the union may want to achieve maximum employment for its members, whatever may be the wage obtained.

If the union decides to pursue the policy for securing the maximum possible employment, then it would pick up the point of intersection, e, of the demand curve for labour, MRPL, and the supply curve of labour SL. At this point, the rate of wage that the union would have to set is W’. At W = W’, the post-union AEL curve or supply curve of labour would be W’e SL with a kink at the point e.

The corresponding MEL curve would be a curve in two parts—one part is W’e that is the horizontal segment of the AEL curve and another part is b MEL; between these two parts there would be a vertical discontinuity. Here the point of intersection of the MRPL and MEL curves is the point e which, by definition, is the equilibrium point. At this point, the rate of wage is W’ and the amount of employment is Le.

In this case, by setting W = W’, the union secures the maximum possible employment and also a wage rise, since W’ > W̅. The more important point to note here is that the labour now is getting a rate of wage (W’) which is equal to its MRP, i.e., the union power here has been able to completely eliminate the monop­sonistic exploitation of labour.

Next, if the union decides to maintain the initial level of employment L = L, then it would pick up the point f and set W = W”. Consequently, the SL = AEL curve here would be W”h SL with a kink at the point h and the MEL curve would be W”h k MEL with a discontinuity at the point h over the vertical stretch hk. The firm’s equilibrium point, i.e., the MRPL = MEL point, now would be the point f.

In the present case, the monopsonistic exploitation of labour has been completely eliminated, since W” = MRPL at the point f.

We have discussed above the two extreme policies that the labour union can pursue when there is monopsony in the labour market. In both these cases, the monopsonistic exploitation is completely done away with, but the union has not been able to achieve an increase in W along with an increase in employment in both the cases.

However, we may also see with the help of Fig. 16.6 that if the union sets a W between W’ and W”, then it would be able to achieve an increase in both W and employment. In that case, the firm’s equilibrium point would be situated at some point on the segment of the MRPL curve.

Since this segment is negatively sloped, the higher the rise in W, the lower would be the rise in employment that the union might secure for the workers. However, in all such cases, we would have W < MRPL and there would happen some monopsonistic exploitation of labour.

We may also see in Fig. 16.6 that if the union sets W in between W’ and W̅, then the MRPL function would pass through the vertical discontinuity of the MEL curve. In all such cases, the firm cannot be in equilibrium at the MRPL = MEL point.

For the sake of profit maximisation, it would have to select the right extreme point of the horizontal segment of the MEL function just before the discontinuity sets in. Therefore, in all such cases, the firm would be in equilibrium at an MEL < MRPL point, securing a rise in both W and employment. But in all such cases, we would have W = MEL < MRPL and so, monopsonistic exploitation cannot be eliminated.