At times, consumption, investment, employment, output, etc., rise and at other times these macroeconomic variables fall.

Such fluctua­tions in macroeconomic variables are known as business cycles. A capitalistic economy exhibits alternating periods of prosperity or boom and depression. Such movements are similar to wave-like movements or see saw movements. Thus, the cyclical fluctuations are rather regular and steady but not random.

Since GNP is the comprehensive measure of the overall economic activity, we refer to business cycles as the short term cyclical movements in GNP. In the words of Keynes : “A trade cycle is composed of periods of good trade characterised by rising prices and low unemployment percentages, alternating with periods of bad trade characterised by falling prices and high unemployment percentages.”

In brief, a business cycle is the periodic but irregular up-and-down movements in economic activity. Since their timing changes rather unpredictably, business cycles are not regular or repeating cycles like the phases of the moon.

Following are the main features of trade cycles:

(i) Industrialised capitalistic economies witness cyclical movements in economic activities. A socialist economy is free from such disturbances.

(ii) It exhibits a wave-like movement having a regularity and recognised patterns. That is to say, it is repetitive in character.

(iv) Not all the industries are affected uniformly. Some are hit badly during depression while others are not affected seriously.

(vi) Just as outputs move together in the same direction, so do the prices of various goods and services, though prices lag behind output. Fluctuations in the prices of agricultural products are more marked than those of prices of manufactured articles.

(vii) Profits tend to be highly variable and pro-cyclical. Usually, profits decline in recession and rise in boom. On the other hand, wages are more or less sticky though they tend to rise during boom.

(viii) Trade cycles are ‘international’ in character in the sense that fluctuations in one country get transmitted to other countries. This is because, in this age of globalisation, dependence of one country on other countries is great.

(ix) Periodicity of a trade cycle is not uniform, though fluctuations are something in the range of five to ten years from peak to peak. Every cycle exhibits similarities in its nature and direction though no two cycles are exactly the same. In the words of Samuelson: “No two business cycles are quite the same. Yet they have much in common. Though not identical twins, they are recognisable as belonging to the same family.”

(x) Every cycle has four distinct phases: (a) depression, (b) revival, (c) prosperity or boom, and (d) recession.

3. Phases of a Business Cycle:

These phases of a trade cy­cle are illustrated in Fig. 2.7. In this figure, the secular growth path or trend growth rate of GNP has been labelled as EG. Now we briefly describe the essential characteristics of these phases of an idealised cycle. 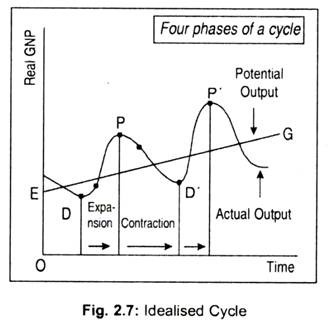 The depression or trough is the bottom of a cycle where eco­nomic activity remains at a highly low level. Income, employment, output, price level, etc. go down. A depression is generally character­ised by high unemployment of labour and capital and a low level of consumer demand in relation to the economy’s capacity to pro­duce. This deficiency in demand forces firms to cut back production and lay-off workers.

Thus, there develops a substantial amount of unused productive capacity in the economy. Even by lowering down the interest rates, fi­nancial institutions do not find enough bor­rowers. Profits may even become negative. Firms become hesitant in making fresh invest­ments. Thus, an air of pessimism engulfs the entire economy and the economy lands into the phase of depression. However, the seeds of recovery of the economy lie dormant in this phase.

Since trough is not a permanent phenomenon, a capitalistic economy experiences expansion and, therefore, the process of recovery starts.

During depression some machines wear out completely and ultimately become useless. For their survival, businessmen replace old and worn-out machinery. Thus, spending spree starts, of course, hesitantly. This gives an optimistic signal to the economy. Industries begin to rise and expectations tend to become more favourable. Pessimism that once prevailed in the economy now makes room for optimism. Investment becomes no longer risky. Additional and fresh investment leads to a rise in production.

Once the forces of revival get strengthened the level of economic activity tends to reach the highest point—the peak. A peak is the top .of a cycle. The peak is characterised by an allround optimism in the economy—income, employment, output, and price level tend to rise. Meanwhile, a rise in aggregate demand and cost leads to a rise in both investment and price level. But once the economy reaches the level of full employment, additional investment will not cause GNP to rise.

On the other hand, demand, price level, and cost of production will rise. During prosperity, existing capacity of plants is overutilised. Labour and raw material shortages develop. Scarcity of resources leads to rising cost. Aggregate demand now outstrips aggregate supply. Businessmen now come to learn that they have overstepped the limit. High optimism now gives birth to pessimism. This ultimately slows down the economic expansion and paves the way for contraction.

During this phase, the demand of firms and households for goods and services start to fall. No new industries are set up. Sometimes, existing industries are wound up. Unsold goods pile up because of low household demand. Profits of business firms dwindle. Output and employment levels are reduced. Eventually, this contracting economy hits the slump again. A recession that is deep and long-lasting is called a depression and, thus, the whole process restarts.

The four-phased trade cycle has the following attributes:

(i) Depression lasts longer than prosperity,

(iii) Prosperity phase is characterised by extreme activity in the business world,

(iv) The phase of prosperity comes to an end abruptly.

The period of a cycle, i.e., the length of time required for the completion of one complete cycle, is measured from peak to peak (P to P’) and from trough to trough (from D to D’). The shortest of the cycle is called ‘seasonal cycle’.

How do you Derive Real GNP in National Income?
Fluctuations in India’s Macroeconomics Variables