Business cycles are characterized by boom in one period and collapse in the subsequent period in the economic activities of a country.

These fluctuations in the economic activities are termed as phases of business cycles.

The fluctuations are compared with ebb and flow. The upward and downward fluctuations in the cumulative economic magnitudes of a country show variations in different economic activities in terms of production, investment, employment, credits, prices, and wages. Such changes represent different phases of business cycles.

The different phases of business cycles are shown in Figure-1:

There are basically two important phases in a business cycle that are prosperity and depression. The other phases that are expansion, peak, trough and recovery are intermediary phases.

Figure-2 shows the graphical representation of different phases of a business cycle: 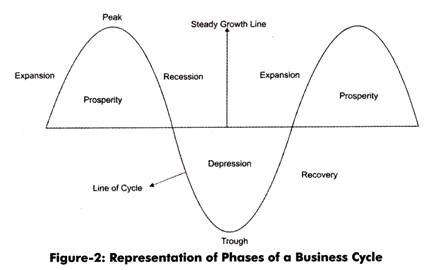 The line of cycle that moves above the steady growth line represents the expansion phase of a business cycle. In the expansion phase, there is an increase in various economic factors, such as production, employment, output, wages, profits, demand and supply of products, and sales.

In addition, in the expansion phase, the prices of factor of production and output increases simultaneously. In this phase, debtors are generally in good financial condition to repay their debts; therefore, creditors lend money at higher interest rates. This leads to an increase in the flow of money.

In expansion phase, due to increase in investment opportunities, idle funds of organizations or individuals are utilized for various investment purposes. Therefore, in such a case, the cash inflow and outflow of businesses are equal. This expansion continues till the economic conditions are favorable.

The growth in the expansion phase eventually slows down and reaches to its peak. This phase is known as peak phase. In other words, peak phase refers to the phase in which the increase in growth rate of business cycle achieves its maximum limit. In peak phase, the economic factors, such as production, profit, sales, and employment, are higher, but do not increase further. In peak phase, there is a gradual decrease in the demand of various products due to increase in the prices of input.

In recession phase, all the economic factors, such as production, prices, saving and investment, starts decreasing. Generally, producers are unaware of decrease in the demand of products and they continue to produce goods and services. In such a case, the supply of products exceeds the demand.

Over the time, producers realize the surplus of supply when the cost of manufacturing of a product is more than profit generated. This condition firstly experienced by few industries and slowly spread to all industries.

This situation is firstly considered as a small fluctuation in the market, but as the problem exists for a longer duration, producers start noticing it. Consequently, producers avoid any type of further investment in factor of production, such as labor, machinery, and furniture. This leads to the reduction in the prices of factor, which results in the decline of demand of inputs as well as output.

During the trough phase, the economic activities of a country decline below the normal level. In this phase, the growth rate of an economy becomes negative. In addition, in trough phase, there is a rapid decline in national income and expenditure.

In this phase, it becomes difficult for debtors to pay off their debts. As a result, the rate of interest decreases; therefore, banks do not prefer to lend money. Consequently, banks face the situation of increase in their cash balances.

Apart from this, the level of economic output of a country becomes low and unemployment becomes high. In addition, in trough phase, investors do not invest in stock markets. In trough phase, many weak organizations leave industries or rather dissolve. At this point, an economy reaches to the lowest level of shrinking.

This leads to reversal of the process of business cycle. As a result, individuals and organizations start developing a positive attitude toward the various economic factors, such as investment, employment, and production. This process of reversal starts from the labor market.

Consequently, organizations discontinue laying off individuals and start hiring but in limited number. At this stage, wages provided by organizations to individuals is less as compared to their skills and abilities. This marks the beginning of the recovery phase.

In recovery phase, consumers increase their rate of consumption, as they assume that there would be no further reduction in the prices of products. As a result, the demand for consumer products increases.

In addition in recovery phase, bankers start utilizing their accumulated cash balances by declining the lending rate and increasing investment in various securities and bonds. Similarly, adopting a positive approach other private investors also start investing in the stock market As a result, security prices increase and rate of interest decreases.

Price mechanism plays a very important role in the recovery phase of economy. As discussed earlier, during recession the rate at which the price of factor of production falls is greater than the rate of reduction in the prices of final products.

Therefore producers are always able to earn a certain amount of profit, which increases at trough stage. The increase in profit also continues in the recovery phase. Apart from this, in recovery phase, some of the depreciated capital goods are replaced by producers and some are maintained by them. As a result, investment and employment by organizations increases. As this process gains momentum an economy again enters into the phase of expansion. Thus, a business cycle gets completed.