Keynes’ consumption function has come to be known as the ‘absolute income hypothesis’ or theory. His statement of the relationship be­tween income and consumption was based on the ‘fundamental psychological law’.

He said that consumption is a stable function of cur­rent income (to be more specific, current dis­posable income—income after tax payment).

It may be added that all the characteristics of Keynes’ consumption function are based not on any empirical observation, but on ‘fun­damental psychological law’, i.e., experience and intuition.

(i) Consumption Function in the Light of Empirical Observations:

Meanwhile, at­tempts were made by the empirically-oriented economists in the late 1930s and early 1940s for testing the conclusions made in the Keynesian consumption function.

However, Simon Kuznets (the 1971 Nobel prize winner in Economics) considered a long period cov­ering 1869 to 1929. His data may be described as the long run or secular time-series data. This data indicated no long run change in con­sumption despite a very large increase in in­come during the said period. Thus, the long run historical data that generated long run or secular consumption function were inconsist­ent with the Keynesian consumption function.

From Kuznets’ data what is obtained is that:

(a) There is no autonomous consumption, i.e., ‘a’ term of the consumption function and

But what is baffling and puzzling to us that the empirical studies suggest two different consumption functions a non-proportional cross-section function and a proportional long run time-series function.

Studies in consumption then were directed to resolve the apparent conflict and inconsistencies between Keynes’ absolute income hy­pothesis and observations made by Simon Kuznets. Former hypothesis says that in the short run MPC < APC, while Kuznets’ obser­vations say that MPC = APC in the long run.

One of the earliest attempts to offer a reso­lution of the conflict between short run and long run consumption functions was the ‘rela­tive income hypothesis’ (henceforth R1H) of ).S. Duesenberry in 1949. Duesenberry be­lieved that the basic consumption function was long run and proportional. This means that average fraction of income consumed does not change in the long run, but there may be variation between consumption and in­come within short run cycles.

Duesenberry’s RIH is based on two hypotheseis first is the relative income hy­pothesis and second is the past peak income hypothesis.

Duesenberry’s first hypothesis says that consumption depends not on the ‘absolute’ level of income but on the ‘relative’ income— income relative to the income of the society in which an individual lives. It is the relative position in the income distribution among families influences consumption decisions of individuals.

A households consumption is determined by the income and expenditure pattern of his neighbours. There is a tendency on the part of the people to imitate or emulate the consumption standards maintained by their neighbours. Specifically, people with relatively low incomes attempt to ‘keep up with the Joneses’—they consume more and save less. This imitative or emulative nature of consumption has been described by Duesenberry as the “demonstration effect.”

The outcome of this hypothesis is that the individuals’ APC depends on his relative position in income distribution. Families with relatively high incomes experience lower APCs and families with relatively low incomes experience high APCs. If, on the other hand, income distribution is relatively constant (i.e., keeping each families relative position unchanged while incomes of all families rise). Duesenberry then argues that APC will not change.

Thus, in the aggregate we get a proportional relationship between aggregate income and aggregate consumption. Note MPC = APC. Hence the R1H says that there is no apparent conflict between the results of cross-sectional budget studies and the long run aggregate time-series data.

In terms of the second hypothesis short run cyclical behaviour of the Duesenberry’s aggregate consumption function can be explained. Duesenberry hypothesised that the present consumption of the families is influenced not just by current incomes but also by the levels of past peak incomes, i.e., C = f(Yri, Ypi), where Yri is the relative income and Ypi is the peak income.

This hypothesis says that consumption spending of families is largely motivated by the habitual behavioural pattern. It current incomes rise, households tend to consume more but slowly. This is because of the relatively low habitual consumption patterns and people adjust their consumption standards established by the previous peak income slowly to their present rising income levels.

Duesenberry’s explanation of short run and long run consumption function and then, finally, reconciliation between these two types of consumption function can now be demon­strated in terms of Fig. 3.39. Cyclical rise and fall in income levels produce a non-propor­tional consumption-income relationship, la­belled as CSR. In the long run as such fluctua­tions of income levels are get smoothened, one gets a proportional consumption-income re­lationship, labelled as CLR. 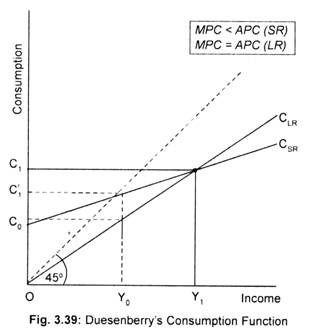 As national income rises consumption grows along the long run consumption, CLR. Note that at income OY0 aggregate consump­tion is OC0. As income increases to OY1, con­sumption rises to OC1. This means a constant APC consequent upon a steady growth of na­tional income.

Now, let us assume that reces­sion occurs leading to a fall in income level to OY0 from the previously attained peak income of OY1. Duesenberry’s second hypothesis now comes into operation: households will main­tain the previous consumption level what they enjoyed at the past peak income level. That means, they hesitate in reducing their con­sumption standards along the CLR. Consump­tion will not decline to OC0, but to OC’1 (> OC0) at income OY0. At this income level, APC will be higher than what it was at OY1 and the MPC will be lower.

If income rises consequent upon economic recovery, consumption rises along CSR since people try to maintain their habitual or accus­tomed consumption standards influenced by previous peak income. Once OY1 level of in­come is reached consumption would then move along CLR. Thus, the short run consump­tion is subject to what Duesenberry called ‘the ratchet effect’. It ratchets up following an in­crease in income levels, but it does not fall back downward in response to income declines.

Friedman divides the current measured income (i.e., income actually received) into two: permanent income (Yp) and transitory income (Yt). Thus, Y = Yp + Yt. Permanent in­come may be regarded as ‘the mean income’, determined by the expected or anticipated income to be received over a long period of time. On the other hand, transitory income consists of unexpected or unanticipated or windfall rise or fall in income (e.g., income re­ceived from lottery or race). Similarly, he dis­tinguishes between permanent consumption (Cp) and transistory consumption (Ct). Transistory consumption may be regarded as the unanticipated spending (e.g., unexpected illness). Thus, measured consumption is the sum of permanent and transitory components of consumption. That is, C = Cp + Ct.

While reaching the above conclusion, Friedman assumes that there is no correlation between Yp and Yt, between Yt and Ct and between Cp and Ct. That is

Yt = Ct = 0 where Y and C are the aver­age values. Now it follows that

Let us consider some families, rather than the average of all families, with above-aver­age measured incomes. This happens because these families had enjoyed unexpected in­comes thereby making transitory incomes positive and Yp < Y. Similarly, for a sample of families with below-average measured in­ come, transitory incomes become negative and Yp > Y.

Now, we are in a position to resolve the apparent conflict between the cross-section and the long run time-series data to show a stable permanent relationship between per­manent consumption and permanent income. 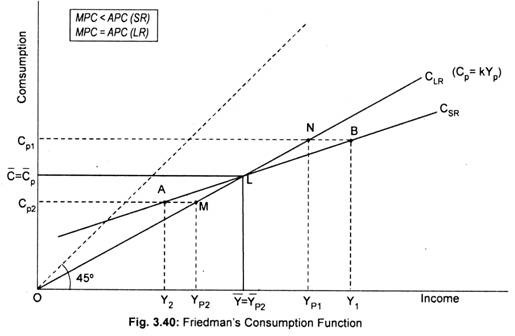 Let us first consider a sample group of population having an average income above the population average. For this population group, transistory income is positive. The hori­zontal difference between the short run and long run consumption functions (points N and B and points M and A) describes the transi­tory income. Measured income equals perma­nent income at that point at which these two consumption functions intersect, i.e., point L in the figure where transitory income in zero.

However, over time as the economy grows transitory components reduce to zero for the society as a whole. So the measured consump­tion and measured income values are perma­nent consumption and permanent income. By joining points M, L and N we obtain a long run proportional consumption function that relates permanent consumption with the per­manent income. On this line, APC is fairly con­stant, that is, APC = MPC.