The following points highlight the effects of three types of taxes on the equilibrium of the monopolist.

Effect of Taxes on the Equilibrium of the Monopolist Type # 1. Imposition of a Lump-Sum tax:

Effect of Taxes on the Equilibrium of the Monopolist Type # 2. Imposition of Profit Tax:

Effect of Taxes on the Equilibrium of the Monopolist Type # 3. Imposition of Specific Tax:

This is the same prediction as with the model of perfect competition.

The change in the price of the monopolist may be smaller, equal or greater than the specific tax, as in the case of pure competition as Fig. 9.15 shows: 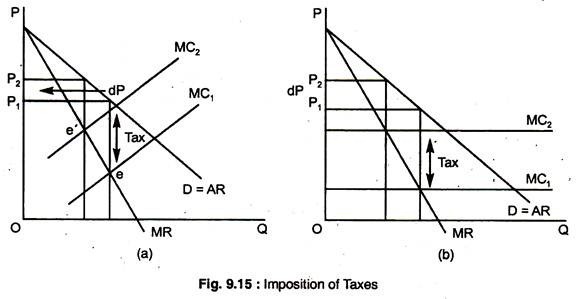 Secondly, if the MC is horizontal, the monopolist will raise the price, but not by the full amount of the tax.

Even when his MC curve is initially elastic, the monopolist will bear some amount of the specific tax.

Thirdly, the examination of the conditions under which the monopolist can pass the whole tax to the consumer by charging a suitably higher price will not be discussed here because of space constraint.