The concept of monopolistic competition was put-forth by an American economist Prof. E.H. Chamberlin in his popular book, “The Theory of Monopolistic Competition” published in 1933.

In simple words, monopolistic competition refers to a market situation where there are many sellers of a commodity, but the product of each seller differs from each other.

No seller can have any perceptible influence on the price output policies of the other seller nor can he be influenced by their action. Thus, product differentiation is the hall mark of the monopolistic competition.

The product differentiation manifests itself in several ways like difference in product brand, difference in trade mark, difference in quality and colour etc. However, many examples can be put forward to explain the concept of monopolistic competition.

“Monopolistic competition is a market situation in which there are many sellers of a particular product, but the product of each seller is in some way differentiated in the minds of consumers from the product of every other seller.” Leftwitch

“Monopolistic competition is a market situation where there are many producers but each offers a slightly differentiated product.” Lim Chong Yah

“Monopolistic competition is found in the industry where there are a large number of small sellers selling differentiated but close substitute products.” Joe S. Bain

“Monopolistic competition has today come to mean a state of affairs in which there is a large number of sellers selling non-homogeneous or slightly differentiated products and in which freedom of entry exists.” H.H. Liebhafsky

Nature of Demand and Cost:

The reason is that if a producer raises the price of the product, some of his customers will stop buying his product and will shift to his rival firm who has not changed his price. On the other hand, if he lowers his price, he will attract some new customers. The shape of the demand curve is shown in Fig. 1. 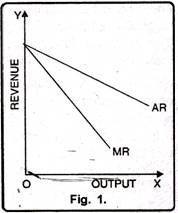 According to Prof. Chamberlin, the firm under monopolistic competition has to make a wider range of decisions than under perfect competition. The firm may vary its price and with it, its sales and output; it may vary the quality of its product and it may engage in sales-promotion activities such as advertisement, publicity and propaganda, etc.

Thus, there are three variables under monopolistic competition, viz.;

It would be very difficult to discuss their effects simultaneously. Therefore, the equilibrium of individual firm is discussed here with reference to prices and output adjustments, assuming that the selling costs are absent. In other words, now we shall examine the individual equilibrium and then examine group equilibrium.

However, in short period, it is not necessary that all the firms should have iso-classic demand curves. The elasticity of demand curve under monopolistic competition depends upon the attachment of the buyers. So, this it will depend upon the age of the firm (and of the product).

It follows therefore that older firms will make abnormal profits while newer firms may have normal profits or even losses. To be very clear and simple, it is stated that there may be three equilibrium conditions of a firm in the short period under monopolistic competition, viz.

(1) It may earn abnormal profits;

(3) It may earn only normal profits. 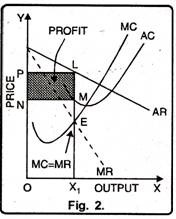 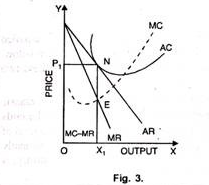 However, it is also possible that the demand may not be favourable to firm under monopolistic competition, i.e., it may not be able to attract the consumers towards its product, if it fixes price equal to its SAC. But it is compelled to sell its product at the price which is less than even its short period average cost. 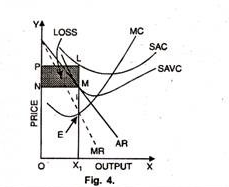 Hence, it may incur losses such firm, in the long-run may leave the industry, if it is not possible for it to change its demand relative to its cost conditions through product differentiation and advertisement. In figure 4 the firm is in equilibrium at point E, where MC=MR. At this equilibrium level the output is OX1 at price OP. Corresponding to this, the average cost LX1 is greater than average revenue MX1, Since, revenue is less than cost, the firm will sustain losses equal to the shaded area PLMN.

Long period refers to that time period in which each firm can change its production capacity by changing the fixed as well as variable factors. New firms can enter the industry and old firms can exit it. Basically, the firms in the long run will get the normal profits.

If, the existing firms are making super normal profits, it will attract some of the new firms in the industry. The entry of new firms will result into over production which will have a depressing effect on price. Hence all the firms in the long run will get normal profits. In fig. 5 output is measured on X-axis whereas price on Y-axis. LAC is the long run average cost and LMC is the long fun marginal cost curve. The firm is in equilibrium because at point E, MC = MR. The equilibrium output is OX1 and price is OP. Since, at this equilibrium average revenue curve is tangent to long run average cost curve at point M; hence the firms are earning normal profits.

Under monopolistic competition, the word ‘group’ is used for industry. There is a difference between an industry and a group. An industry generally consists of firms which produce homogeneous product, whereas a group is composed of firms which produce a differentiated product. Thus group consists of a number of firms producing close substitutes. For example, shoe making firms like ‘Bata’, ‘Carona’, and ‘Liberty’ are a group.

To study group equilibrium, we assume that:

(i) Demand and cost curves of all the firms are identical,

(ii) No firm can influence the price and output decisions of its rivals.

The Group Equilibrium is shown below with the help of Fig. 5. 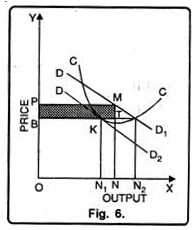 In Fig. 6, DD1 is the group demand curve and CC is the cost curve. Every firm would like to fix up OP price because at this price the difference between price and cost is the maximum and producer gets supernormal profit equal to PMTB. The other firms will be attracted to enter the market and now the market demand will be shared by a larger number of firms. In this situation demand curve will shift downwards and the new demand curve will be DD2.