A comparative analysis of monopoly and monopolistic competition has been made on the following aspects:

Under monopoly, product produced may or may not be homogeneous. But under monopolistic competition, there is always product differentiation.

2. Number of Buyers and Sellers:

Under monopoly, there are strong barriers on the entry of new firms. On the other hand, under monopolistic competition, new firms can enter into the market and same can exit the market. But it is possible only in the long run not in the short run.

Under monopoly, we assume that the sellers and buyers have complete knowledge regarding market activities. But under monopolistic competition, there is imperfect knowledge on the part of buyers and sellers.

Regarding the advantages of monopolistic competition, the issue can be analyzed on many fronts.

A brief description is as under:

From the economic side, it might be argued that selling expenses increase the velocity of circulation of money and so increase employment. Here, it has been pointed out that there are cheaper and more dignified ways of increasing employment and this argument breaks down completely in a time of full employment, and still more in a time of inflation.

On the sociological side, it might be argued that advertising has itself an entertainment and cultural value, and that it promotes mass communication in the form of cheaper magazines, news papers, radio and television. Prof. Boulding has doubted upon the significance of this value also. Thus, he said, “I am happy to leave this argument to the sociologists.”

3. On the Basis of Monotony:

Much controversy and honest doubt surrounded these issues. Some economists think that the wastes due to monopolistic competition are, in-fact, small. Others argue that product differentiation satisfies consumer’s desires for variety and breadth of choice if pure competition prevails everywhere, homogeneity of products would mean lower costs. Would not life then be dull? If the whole population were put into uniform clothes and made to live in uniform barracks, vast quantities of resources would be released, but what for? 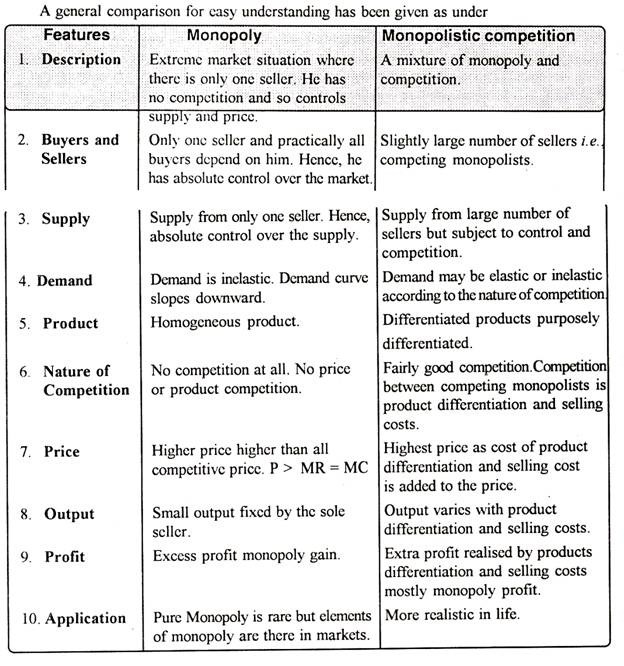