The Heckscher-Ohlin theory, like the earlier theories of trade, assumed that the techniques of production were given and fixed. Such an assumption can be valid only in a static system. In actual dynamic realities, there can be no place for such an assumption. The technical changes have highly significant effects on production and trade. A technological change may be expressed in new methods of producing existing goods or in the production of new varieties of goods.

The two prominent models that attempt to explain the international trade on the basis of technological changes are: 1. Technological Gap or Imitation Gap Model 2. Product Cycle Model.

According to this model, as a firm develops a new product, its first test is in the home market. After it is proved to be successful in the home market, the efforts are made to introduce it in the foreign markets. The new products confer a temporary monopoly position upon the producing firm or exporting country in the world trade. This monopoly position is often protected by the patents and copyrights. The exporting country enjoys comparative advantage over the rest of the world until the foreign producers imitate the new varieties of products or learn new processes of production.

The main assumptions in Posner’s theory are as follows:

(i) There are two countries, A and B.

(ii) The factor endowments are similar in two countries.

(iii) Both the countries have similar demand conditions.

(iv) The factor price ratios in the two countries are similar before trade.

(v) There are different techniques in the two countries.

Posner referred the integration of innovation and imitation lag as ‘dynamism’. According to him, a dynamic country in international trade is one which innovates at a greater rate and which imitates the foreign innovations at a greater speed. If one of the two trading countries has a greater degree of dynamism than the other, the latter will find the erosion of its markets and consequent deficit in trade balance.

According to Posner, if the two countries are otherwise identical, whether trade between them will be generated by technological innovation, will depend on the net effect of the demand and imitation lags. If the demand lag is longer than the imitation lag, the producers in the imitating country would adopt the new technology before the consumers in their home market had started demanding the new good. In this case, the technological innovation would not generate trade.

On the other hand, if the imitation lag is longer than the demand lag, the international trade is likely to be generated by innovation. So the pattern of trade between the two countries will depend upon the relative duration of the two lags.

The trade theory given by Posner can be explained through Fig. 9.7. In Fig. 9.7, time is measured along the horizontal scale and the trade balance of country A, the innovating country, is measured along the vertical scale. Upto point t0, no trade takes place between the two countries. At this point, the innovating country A introduces the new product. As the consumers in imitating country B become aware of the product, they start consuming it. Country A, therefore, starts exporting it. 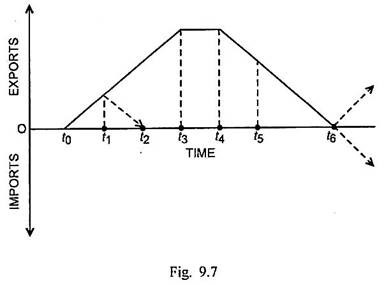 In case, the country B were unable to adopt the new technology, the exports from country A would continue to rise until they reached the maximum level in time t3.

The period, t0t3 can be identified as demand lag. If new technology could be adopted by country B by the time t1, the imports of the product in their market could be contained before they reached the maximum level. Country B then reversed them with trade ceasing at time t2. If the imitation gap were longer and the producers in country B could not adopt the new technology until time t4, exports from country A to country B would have continued at the maximum level until t4.

As country B started imitating the new technology, there would have been decline in exports from A to B and these would fall down to zero in time t6. In this connection, two other possibilities can be discussed. If producers in country A fail to introduce new innovation in time t6 and country B makes further innovations, country B will start penetrating the domestic market of country A indicated by the arrow in the lower part of the Fig. The second possibility in that producers in country A may introduce new innovation in time t6 leading to increase in its exports to country B. That is shown in the Fig by the arrow in the upward direction.

This model has certain shortcomings:

(i) It does not explain the technological gap or imitation gap in a precise manner.

(ii) It fails to explain why the technological gaps arise and how they get eliminated over time.

The product cycle model was originally developed by Raymond Vernon and S. Hirsch. It has been supported by Louis T. Wells and G.C. Hufbauer.

This model explains that a product is initially produced and exported by the innovating country but finally it ends up as an importing country of the same product or same differentiated variety of that product.

Vernon’s product cycle model is based upon the assumptions given below:

(i) The producers in capital-rich countries initially introduce new products.

(ii) The innovating firms have some real or imagined monopolistic advantage.

(iii) The need and opportunities of the domestic market stimulate the innovation of a new product.

(iv) Innovating firm has little information about the conditions existing in foreign markets.

(vi) There may be a triggering event like the appearance of rival producers that leads to the turning out of the product for export.

The basic argument in this model is that the factor requirements of a product differ over its lifetime, so that there is a cycle in the production of it. The innovation of a new product involves risks that can be borne by relatively rich firms. These risks can be reduced, according to Hirsch, through flexibility on production side that required skilled labour and easy flow of information on consumers responses. Vernon points out that the easy flow of information can be possible by the proximity to market.

In view of these factors, it is recognized that the production of new products is likely to be concentrated in the advanced countries. With the standardization of product and the manufacturing process, producers in other countries can enter the market, provided the pattern of factor prices in their countries is such as to give them cost advantage over the pioneering producers.

Consequently, other developed countries or even developing countries will undertake production of these goods. It is also possible that the firms, which produced the good initially, set up production facilities in other countries to avail of the advantage of more favourable factor prices. As a results, the country originally producing the good will experience a decline in their exports and may even turn importer of either the same or improved variety of the product.

The pattern of trade analysed by this theory has been witnessed in case of several products such as electronic goods, synthetic materials, motion pictures, consumer durables and office machinery and equipments. The classical example of the product cycle model is provided by the experience of U.S. and Japanese manufactures of radio. Immediately after the Second World War, the U.S. manufactures dominated the world market of radios based on vacuum tubes.

Within a few years, the Japanese manufacturers copied the U.S. technology and captured a large part of world market. The U.S. then introduced transistors. Once again Japan could produce them at lower costs and recapture the world market. Than the U.S. manufactures introduced printed circuits. Even in this case, the Japan followed this technology and expanded its exports. Similar is the pattern of trade concerning automobiles involving United States and Japan.

According to this theory, the products generally pass through four different stages discussed below:

The high income and labour saving products are introduced by the producers of advanced countries like the U.S.A. as they are well equipped to manufacture them. Initially the products are introduced in the domestic market. After they gain acceptance in the home market, these are exported to the countries having similar tastes and levels of income. The innovating producers enjoy virtual monopoly in both the domestic and foreign markets for some time.

In this stage, the foreign markets of the new products become so large that the foreign producers start manufacturing them or their close substitutes. As a result, the shares of the manufacturers of innovating country in the world markets start declining but they still supply considerably large quantities of the product to the world market.

The foreign manufacturers enjoy greater competitive advantage over the manufacturer of the countries like United States. Firstly, they enjoy the advantage of lower labour cost. Secondly, they start enjoying the advantages of economies of scale, which were being initially reaped only by the advanced countries.

Finally, the foreign producers reach out the markets of the originally innovating countries despite transport costs and tariffs imposed by the advanced countries and the innovating countries become the net importers of the product. When this situation develops, the country like the United States has to produce new varieties of products which are consumed by relatively well-off sections of consumers both at home and abroad.

Vernon’s product cycle model is an extension of the technological gap model. The whole structure of this model is based upon the experience of the United States. Several products are innovated by that capital-abundant country on account of its advantages of skilled man power, high per capita income and large home market. The comparative advantage is lost by that country as the new products are developed firstly by the other advanced countries, and later by the less developed countries when the product gets standardised.

The product cycle model does not contradict the traditional theory of comparative cost advantage and factor proportions theory. The innovations of a new product established the comparative advantage because of its relative abundance of scientific and technical skills. On accounts of its comparative advantage, the innovating country becomes able to produce and export the new product at a relatively lower cost. The studies attempted by the writers like Hoffmeyer and Hufbauer have supported the product cycle model of Vernon.

This model, however, has been criticised on account of its faulty assumptions. Firstly, it is wrong to suppose that the innovating firm has no knowledge about the conditions existing in other countries. Secondly, there is not any significant difference in the home environment in the innovating country and that in the other advanced countries because all of them are equipped with the infrastructure to innovate the new products. Thirdly, it is not essential that innovations are initially made by the capital-rich countries.

Even some of the less developed countries like Brazil, Mexico, South Korea, China and India have been adapting the products according to their local conditions and also venturing innovations. Fifthly, the innovations are not necessarily stimulated by the opportunities offered by the domestic market, but also by the consideration of maximizing exports to foreign countries.