The size of gain from international trade is determined by several factors discussed below:

It simply implies that the share of such a country out of the total gains from trade is relatively smaller. Closer the terms of trade of a country to the domestic exchange ratio of two commodities lesser is the size of gain from trade for it and vice-versa (Refer to Fig. 13.2). 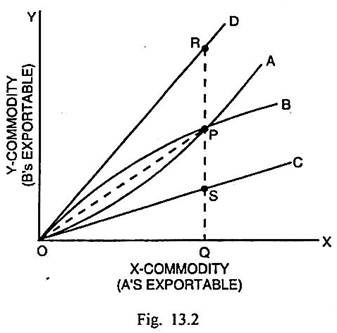 The difference in comparative cost ratios of producing two commodities in the two trading countries have much bearing upon the gain from international trade. If country A has comparative cost advantage in the production of cloth and B has cost advantage in the production of steel, they will specialise in these respective goods and make gain from trade. If specialisation results in a relatively greater fall in the cost of cloth in country A than that in steel in country B, greater gain from trade will become available to A and vice-versa.

In the words of R.F. Harrod, “A country gains by foreign trade, if and when the traders find that there exists abroad a ratio of prices very different from that to which they are accustomed at home.” Greater the difference in cost ratio, more is the gain from trade for a country relative to the other.

The reciprocal demand refers to the elasticity of demand for the product of one country by the other country. If the demand for cloth (exportable of A) is less elastic in country B, the latter will offer more quantity of steel for one unit of cloth. It will cause the terms of trade to turn in favour of country A and this country will obtain a greater share from the total gain from trade.

A small country has a limited size of domestic market. Its productive resources too are limited and specific. The specialisation and exchange within the home country can bring very little benefits for it. As international trade commences, this country may completely specialise in the production of such commodities in which it enjoys comparative advantage over the other countries. The greater the difference between the international price and domestic price of its exported products, greater will be the share out of gain from trade for this country.

A large country, on the opposite, possesses a large domestic market and diversified productive resources. If trade commences, it will have only incomplete specialisation. Since the small country can absorb very small quantity of the product available for export, it will have to dispose of a large part of its product in the home market. It may have substantial gain from specialisation and exchange within the home country but the gain from international trade will be very small.

The higher or lower level of money income of a country too determines the gain from trade for it. If the products of the home country command a strong and permanent demand, the expansion in its exports will raise the incomes from exports. The output in these industries will expand and the increased demand for labour will raise the money wages of workers. The employers in other industries will also raise wages to retain their more efficient workers.