Effects of Depreciation and Devaluation of the Exchange Rate!

Under the recent economic reforms in India, not only have we liberalized the industrial sector but have also opened up the economy, made our currency convertible and allowed exchange rate to adjust freely.

It is important to understand the full implications of opening up the economy and allowing our currency to ‘float’.

It is worthwhile to note that under a fixed exchange rate system when citizens of a country spend some of their income on imports, it reduces the value of multiplier because imports, like savings and taxes, serve as a leakage from the circular flow of income. On the other hand, exports, like investment and Government expenditure, raise the aggregate demand for domestically produced goods and services and thereby cause an expansion in output through a mul­tiplier process.

Let us make in-depth study of the effects od depreciation and devaluation of the exchange rate.

Effects of Depreciation (or Devaluation) on Imports, Exports and Real National Income:

From our foregoing discussion of determination of exchange rate through demand and supply curves of foreign exchange it follows that when a currency of a country, say Indian rupee, depreci­ates as a result of demand and supply conditions or is devalued by the Government, the prices of Indian exports in terms of foreign currency (say dollar) will fall.

And if level of output, especially industrial output is lower because of demand recession, the increase in net aggregate demand or increase in expenditure on domestic output will cause expansion in output and is therefore likely to increase GNP or real national income.

This is illustrated in Fig. 28.6 where as a result of increase in net exports aggregate demand curve shifts to the right. As a result, given the short-run aggregate supply curve the levels of GDP (National income) and price level increases. Thus a devaluation or depreciation can therefore serve as a stimulus to the economy. 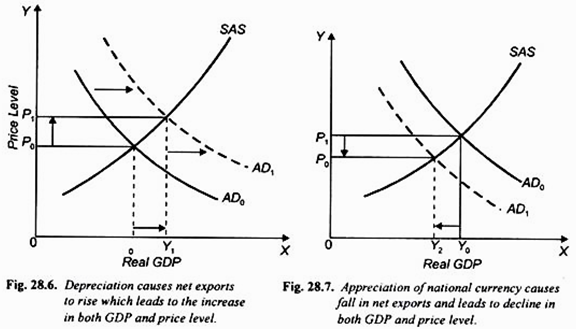 It will be recalled that in the Keynesian model of determination of real national income (GNP), the effect of net exports, that is, X-M, where X denotes value of exports and M denotes value of imports, is similar to investment in its effect on national income. Both raise national income through a multiplier process. It may be noted here that because of the favourable effect of depreciation or devaluation of currency on exports, imports and real GNP, the countries are tempted at times to intervene in the foreign exchange market, devalue their currency to provide stimulus to their econo­mies.

However, if one country devalues its currency to stimulate its economy, the other countries can also do SO. Now, when all countries attempt to devalue their currencies, there will be no gain in real income for any of them. Such a situation actually occurred during the early years of Great Depres­sion (1929-33).

In their attempt to maintain their exports and protect their level of income and employment, many countries devalued their currencies without bothering about its adverse effects on the economies of the other countries. Such policies of competitive devaluation are generally called “beggar-neighbour” policies. Since all followed this beg thy-neighbour policy, no one could maintain their export sales and protect domestic employment and level of economic activity which were badly hurt by the severe depression that gripped their economies.

On the contrary, the appreciation of a national currency will have opposite effect. When the currency of a country appreciates, its exports will become costlier causing a decline in them, whereas its imports will become cheaper resulting in increase in them. As a result net exports of the country will decline leading to the decrease in net exports and will therefore cause leftward shift in the aggregate demand curve AD as is shown in Fig. 28.7. This will cause fall in both real GDP and price level.

Devaluation and the Balance of Trade: The J Curve:

Lowering of the value of a currency of a country tends to raise its exports by making its goods cheaper for foreigners. On the other hand, devaluation or depreciation makes the imports from abroad expensive in terms of domestic currency (rupees in case of India) and therefore the imports tend to fall.

However, it may be noted that the effect of devaluation or depreciation on balance of trade is ambiguous and quite uncertain because a good deal depends on the price elasticity of ex­ports and imports of a country. For example, if the price-elasticity of exports in terms of a foreign currency of a country is less than unity, the value of exports in terms of a foreign currency will fall as increase in physical volume of exports will be more than offset by the depreciation of the currency. On the other hand, if the demand for imports is in­elastic, they will not decrease despite devaluation. 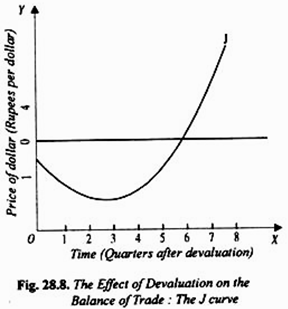 Now, pertinent question arises how the .J-curve comes about. We will explain this with refer­ence to devaluation (depreciation) of rupee. It may be recalled here that balance of trade is equal to the value of exports minus value of imports. Thus;

On the other hand, the rupee- price of imports increases immediately after devaluation. Imports into India from abroad would be more costly because as a result of devaluation a hundred rupee note will buy fewer US dollars and pound sterling’s than before. Thus, a rise in the rupee-price of imports has a negative effect on the balance of trade, that is, it will tend to increase the trade deficit or reduce the trade surplus.

Thus with the rise in price of a US machine, Indians will spend more on a US machine than before. This is a price effect. But increase in the price of the US machine will lead to the decrease in the quantity demanded of US machines by the Indians. This is the quantity effect. Now, the net effect of devaluation on the value of imports depends on whether quantity effect is larger than price effect or vice versa. And this depends on the price elasticity of imports.

It therefore follows that net effect of devaluation (depreciation) on the balance of trade could go either way. The historical experience shows that initially the negative effect predominates. This is because whereas the effect of devaluation/depreciation on the price of imports is quite fast, it takes some time for quantity of imports to decline in response to the rise in rupee-price of imports and the value of exports to increase in response to the fall in price of exports in terms of foreign currency.

The devaluation or depreciation of currency tends to raise the price level in the country and thus increase the rate of inflation. This happens because of two reasons. As a result of depreciation/ devaluation, prices of imported goods rise. In case of imports of consumer goods rise in their prices directly leads to the increase in the rate of inflation.

Second, depreciation makes the exports cheaper and therefore more com­petitive in the world markets. This causes the exports of goods to increase and reduces the supply and availability of goods in the domestic market which tends to raise the domestic price level. Besides, due to higher prices of imported goods, people of a country tend to substitute domestically produced goods for the now more expensive imports.

As a result, the aggregate demand or expendi­ture on domestically produced goods and services will increase causing either expansion in output of goods or rise in their prices or both. However, if the economy is working close to the capacity output, the effect will be more on raising prices of goods.