In this article we will discuss about the theory of immiserising growth.

The process of economic growth may bring about an increase in level of output in the growing economy and the wealth effect may even be positive but the deterioration in the terms of its trade may be so large that it more than offsets the positive wealth effect. In such a situation, there can be a net decline in the welfare of the nation. In other words, it become worse off than before. The process of growth and trade, resulting in the country becoming poorer in respect of welfare, has been termed as ‘immiserising growth’ by Jagdish Bhagwati.

The possibility of immiserising growth can be discussed under the following set of assumptions:

(i) There are two countries, the home country A and the foreign country B.

(ii) The home country experiences growth while the other country is not experiencing any growth is real output.

(iii) There are two commodities X and Y.

(v) There is full employment or resources.

(vi) The technical progress is neutral.

(vii) The growth results in an expansion in the supply of abundant factor, say labour.

(viii) Productive factors are mobile between the two countries.

The case of immiserising growth can be explained on the basis of the above assumptions with the help of Fig. 11.7. 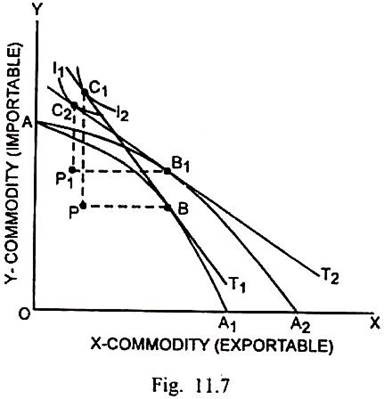 In Fig. 11.7, AA1 is the original production possibility curve and T1 is terms of trade line. The production equilibrium is determined at B. The consumption equilibrium takes place at C1 where T1 is tangent to the community indifference curve I2. Country A exports BP quantity of X and imports C1P quantity of Y commodity. As growth takes place and the labour supply increases, the production possibility curve shifts to AA2.

There is an increase in production of importable commodity due to growth and its higher relative price. On the other hand, the consumption of importable commodity decreases due to relative rise in the price. No doubt, there is an increase in production but terms of trade for the home country become worsened to such an extent that consumption point shifts from the higher indifference curve to the lower indifference curve. Consequently, the level of welfare shrinks after growth. It signifies the immiserising growth.

Thirdly, the terms of trade of country A can deteriorate, if income elasticity of country B’s demand for the exports of country A is very low. Fourthly, in case of a small developing country, this phenomenon can occur on account of such distortions as monopoly trade and tariffs. Fifthly, the state of immiserising growth for country A can arise, if it is so greatly dependent on trade that a substantial worsening in its terms of trade results in a decrease in its national welfare.

This phenomenon is likely to prevail in the large developing countries having inelastic demand for their exports in foreign countries. In case they produce a bumper crop, the international prices tend to crash and their terms of trade become unfavourable. That involves them in the immiserising growth.

However, this phenomenon does not seem to be greatly prevalent in the real world. Even if it is recognized that there has been a secular deterioration of terms of trade for the developing countries, that has been made up by a substantial increase in production and resultant increase in real per capita income and welfare. The increase in real per capita income would have been much greater, if the growth of population had occurred at a relatively lesser rate.