Get the answer of: Are Tariffs and Quotas Equivalent in their Economic Effects?

Governments intervene in international trade for various reasons—economic and non-economic. Such intervention goes by the name protectionism. In fact, protectionism refers to any interference with free trade by the government of a country.

Government control may be two forms – import control and export promotion. In general the stress is on those methods of trade control (or instruments of trade policy) which seek to restrict imports. These are known as barriers to trade.

Two major tools or instruments of trade (import) control are tariffs and quotas. A tariff is a tax on imported goods. The tariff can be specific (based on weight, volume, or number of units, e.g. Rs. 10 a kg. Rs. 500 a dozen or ad valorem (a percentage of the price).

The average Indian tariff is now less than 5%, but many items bear no tariff at all, while a few items attract substantial tariff. A quota is a quantity limit. It specifies the maximum amount that can be imported during a given time period (usually a year).

Quotas can be global (e.g., total imports of widgets from all foreign suppliers cannot exceed 1,000 widgets per year) or geographic (assigning quotas to particular countries). Quotas also can be combined with tariffs in a tariff- quota. In this case, a certain amount of a good from one country is allowed to enter another country without a tariff. For amounts in excess of that limit a tariff is imposed.

A tariff will tend to raise price, lower the amounts consumed and im­ported, and raise domestic production. A tariff lowers imports and con­sumption, raises domestic production and price. Starting from the free- trade equilibrium in Fig. 1. India now puts Rs. 2 tariff on clothing imports. The price of imported clothing to Rs. 6 (including the tariff). 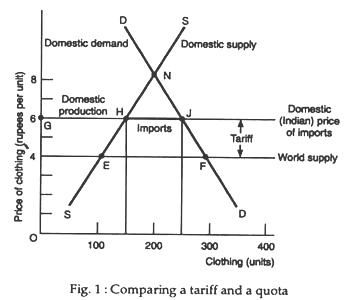 The market price rises from Rs. 6, so the total amount demanded falls. Imports fall from 200 units to 100 units, while domes­tic production rises from 100 to 150 units.

Quotas have the same qualitative effect as tariffs. A prohibitive quota (one that stops imports altogether) would achieve the same result as a prohibitive tariff. The price and quantity would move back to the no-trade equilibrium at N in Fig. 1. A less stringent quota might limit imports to 100 clothing units; this quota would equal the heavy line HJ in Fig. 1. A quota of 100 units would lead to the same equilibrium price and output as did Rs.2 tariff.

Although there is no essential difference between tariffs and quotas, some subtle differences to exist.

A tariff gives revenue to the government. A quota, on the other hand puts the profit from the resulting price difference into the pocket of the importers licence holders. Because of these differences, economists generally regard tariffs as the lesser evil.

There are economic costs of tariffs:

(2) Consumers reduce their consumption due to high prices; and

(3) The government gets revenue.

As P.A. Samuelson put it, “Tariffs create economic inefficiency. More precisely, when tariffs are imposed, the economic loss to consumers exceeds the revenue gained by the government plus the extra profits earned by producers”.

Fig. 2 shows the economic costs of a tariff. Area B is the tariff revenue collected by the government. It is equal to the amount of the tariff times the units of imports and total Rs. 200. The tariff raises the price in domestic markets from Rs 4 to Rs. 6, and producers increase their output to Rs. 150. Hence, total profits rise by Rs. 250 shown by the rectangle LEHM and equal to Rs. 200 on old units and by an additional Rs. 1000 on the new 50 units. 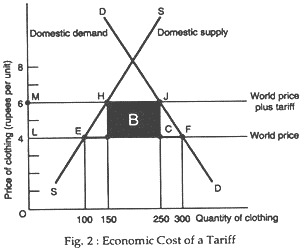 Finally, note the consumers pay a high price. The total consumer surplus loss is given by the area LMJF and is equal to Rs. 600.

The overall social impact is then a gain to producers of Rs. 300, a gain by the government of Rs. 200, and a loss by consumers of Rs. 600. The net social cost (counting each of these rupees equally) is therefore Rs. 100. We can reckon this as equal to area Ay and C. Area A is the net loss that comes because do­mestic production is more costly than foreign production.

When the domestic price rises, businesses are thereby induced to increase the use of relatively costly g domestic capacity. They produce output up to the point where marginal cost o. is Rs. 6 per unit (instead of up to Rs. 4 per unit under free trade).

Firms reopen inefficient old factories or work existing factories extra shifts. From an economic point of view, using these high-cost plants is inefficient, for the new clothing produced by these factories at an average marginal cost of Rs. 5 could be bought from abroad at Rs. 4. The new social cost of this relatively costly production is area A and equal to Rs. 100.

Hence, the total social loss from the tariff is Rs. 200 calculated both ways.

Fig. 2 illustrates one feature that is important in understanding the politics and history of tariffs. When a tariff is imposed, part of the impact is upon economic efficiency but the largest effect is often redistributive. In Fig.2 areas A and C represent efficiency losses from inefficiently high domestic production and inefficiently low consumption, respectively.

Here, the efficiency losses are equal to the two little triangles and sum up to Rs. 200. The redistribution involved is much larger, however, equalling Rs. 200 raised in tariff revenues levied upon consumers of the commodity plus Rs 250 in higher profits. Consumers will be unhappy about the higher product cost, while domestic producers and workers in those firms will benefit.

Imposing a tariff has three effects: First, it encourages inef­ficient domestic production; second, it induces consumers to reduce their purchases of the tariffed good below efficient levels; and finally it raises revenues for the government. Only the first two of these necessarily impose costs on society in terms of efficiently loss.

A tariff raises revenue for the government. A quota generates no government revenue. All the benefits of a quota go to protected domestic producers and to those imports who manage to get the scarce and valuable import permits used with quotas. Since permits are limited, permit-holders can buy the good at the low foreign price and resell it at higher domestic price.

The difference between the price of importer pays the foreign supplier and the price the importer can charge the domestic consumers times the number of units imported is a monopoly profit that comes from having a licence to import. These monopoly profits are precisely equal to the revenue the government would have received under a tariff.

What is Economic Growth? Answered! | Economics
Objectives of Tax Policy in Developing Countries