In this article we will discuss about the Stopler – Samuelson theorem of international trade.

In what way the international trade and relative changes in the factor prices would affect the distribution of income, was worked out by W.F. Stopler and Paul Samuelson on the basis of the H-O theory. The theorem developed by these writers stated that commencement of free international trade would benefit the relatively abundant factor and hurt the relatively scarce factor of production.

Assumptions of the Stopler-Samuelson Theorem:

The theorem developed by these two writers, called as Stopler-Samuelson Theorem, rests upon the following main assumptions:

(i) One of the two trading countries, considered for analysis, produces two commodities—cloth and steel, and employs only two factors—labour and capital.

(ii) The production function for each of the two commodities is homogenous of first degree. It implies that the production is governed by constant returns to scale.

(iii) Both labour and capital are fully employed.

(iv) The two factors of production are fixed in supply.

(v) The conditions of perfect competition exist both in the product and factor markets.

(xi) There is an absence of transport costs.

Given the above assumptions, the Stopler- Samuelson Theorem can be explained through Edgeworth Box shown in Fig. 8.10. 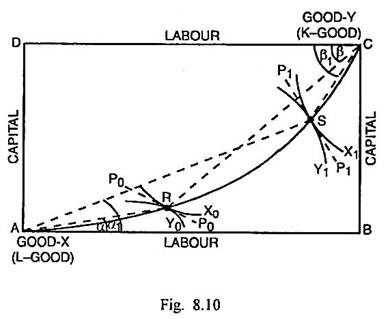 In Fig. 8.10, the Edgeworth box shows that the given country is labour-abundant and capital-scarce. A is the origin for labour-intensive goods—cloth and C is the point of origin for the capital-intensive good—steel. AC is the non-linear contract curve sagging below. In the absence of trade, production takes place at R, which is the point of tangency of isoquant X0 of cloth, isoquant Y0 of steel and the factor price line P0P0.

As the production of exportable commodity cloth expands, the resources are diverted from the steel industry to the cloth industry. The increased production of cloth and resource diversion to this industry will cause a rise in the price of cloth relative to that of steel. It may be shown through Fig. 8.11. 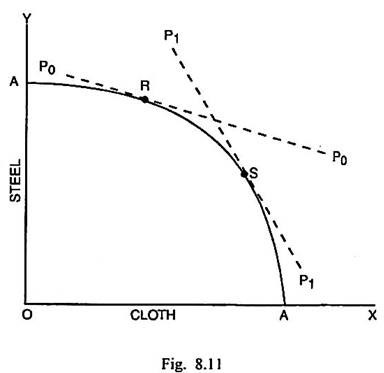 Fig. 8.11 measures L-good cloth along the horizontal scale and K-good steel along the vertical scale. AA is the production possibility curve. Its slopes indicates that this country is labour-abundant and capital-scarce. In the absence of trade (i.e., autarchy), the production takes place at R. This point corresponds with point R in Fig. 8.10.

As the production of cloth is expanded after the commencement of trade, production takes place at S. This point corresponds with point S in Fig. 8.10. The slope of the production possibility curve at S is greater than its slope at R. This is represented by more steepness of price line P1P1 than P0P0.

From this it follows that:

It signifies that price of cloth increases while that of steel falls.

The increased employment of labour along with the higher price of labour (wage rate) implies that the absolute income share of labour in the national income rises. On the other hand, the reduced employment of capital along with a fall in its price (rate of interest) lowers the absolute share of capital. From it follows the conclusion of Stopler-Samuelson Theorem that international trade would benefit the abundant factor and hurt the scarce factor.

Implications of the Stopler-Samuelson Theorem:

The Stopler-Samuelson Theorem leads to some important implications which are mentioned below:

(i) Increase in Welfare:

Since trade raises the share of abundant factor in the GNP, the distribution of income becomes more equitable.

The theorem leads to an important policy implication that the strategy of export promotion rather than import substitution is more appropriate in the less developed countries for the achievement of twin objectives of growth and equitable income distribution.

(iv) Adverse Effect of Tariff and Other Protective Policies:

The theorem suggests that slapping of tariffs and other restrictive or protective measures will reduce imports. That will limit also the opportunities to expand exports. It will keep the real income of the abundant factor relatively lower than that of scarce factor. As a consequence, the growth process will get slowed down apart from making the income distribution inequitable.

The Stopler-Samuelson Theorem came to be criticized, modified and elaborated by writers like Kelvin Lancaster, Lloyd Metzler and Jagdish Bhagwati. Metzler dropped the assumption of fixed terms of trade and argued that the imposition of tariff, given an inelastic offer curve of foreign country, will cause improvement in the terms of trade of tariff-imposing country through an increase in internal price of country’s export and a fall in the internal price of country’s import.

In such a situation, the production of import-substitutes will decline and the income will get distributed in favour of the factor used relatively intensively in the production of exportable commodity. Kelvin Lancaster did not accept the view that protection would result in an inequitable distribution of income. Jagdish Bhagwati did not accept the universal validity of this theorem.

He discussed the possible alternative effects of protection upon the income of more intensively employed factor. In his words, “…protection (prohibitive or otherwise) will raise, reduce or leave unchanged the real wage of the factor intensity employed in the production of good according as protection raises, lowers or leaves unchanged the relative price of that good.”