The Stolper-Samuelson theorem (SST) simply suggests that, in any particular country, a rise in the relative (producer) prices of the labour intensive good will make labour better off and capital worse-off, and vice-versa, provided that some amount of each good is being produced.

The SST of a Linear Model:

Here we assume the economy produces two goods, labour and capital. The food industry in labour-in­tensive and, the cloth industry is capital-intensive. In Fig. 1 we show the SST in linear model. Here we have linear constraints 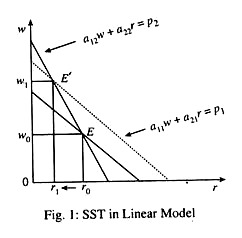 The slopes of the lines shown in Fig. 1 depend on factor intensities expressed by input- coefficients (a11, a21….etc.). For cloth the slope of the zero profit equation is-a11/a21. For food the slope is – a11 a22. Here we have assumed that cloth (C) is capital-intensive and food (F) is labour-intensive.

Under these conditions an increase in p2 (the price of cloth) which causes a parallel shift of unit (2) produces a new solution at E’. This lowers r and raises w. Thus if the price of, say, the labour intensive good (food) rises, the price of labour (the wage rate) will rise, while price of the other factor, (capital) will fall.

Here we use the indirect national income functions which shows the maximum value of NNP for given output prices and factor endowments.

We assume that NNP (say, Y) is a linear for of output levels:

where F and C are foods and cloth; respectively and p1 and p2 are their prices. 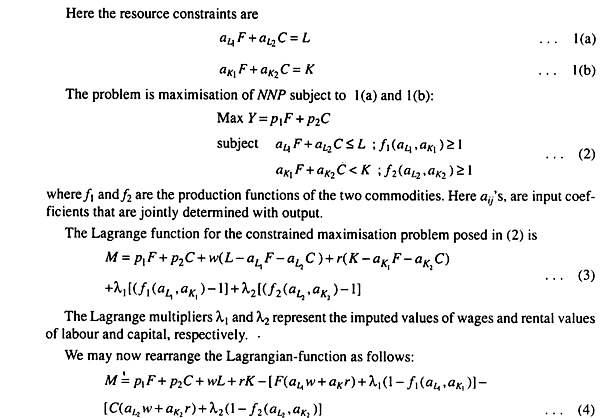 We may now maximise M by first maximising the two square-bracketed terms (which enter negatively) w.r.t 5 the aiJ’s, treating the o/t levels of F and C as constants.

This is equivalent to two separate minimisations: 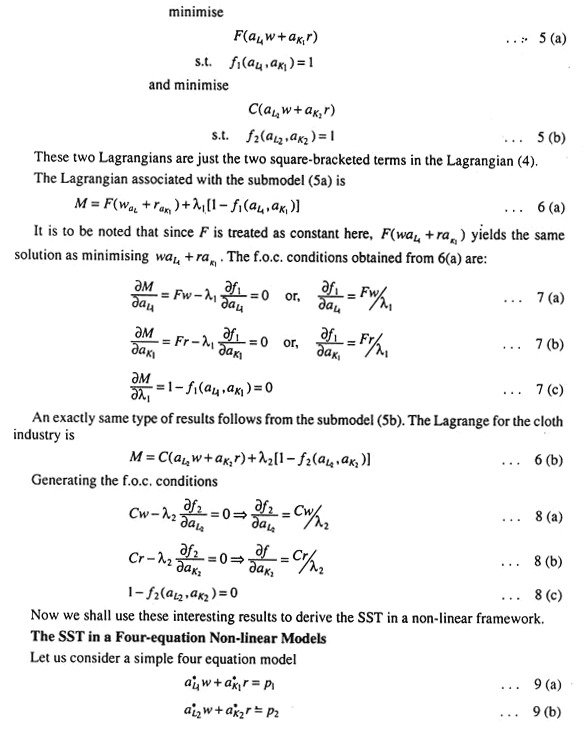 Here (aL1 , a*K1) &(a*L2, a*K2) are cost-minimising input combinations. Equations 9 (a) and 9 (b) are zero-profit conditions, i.e., price of each commodity is equal to its cost of production (which is the sum of labour-cost and capital cost).

Equations 10 (a) and 10 (b) are the endowments of the two factors (capital and labour).

We may now examine the effects of changes in output prices on factor prices.

Equations 9 (a) and 9 (b) are the sole determinants of factor prices.

Since, a ji s are functions of w/r alone, the solution values of these two equations are:

So, upon differentiating 9 (a), we get 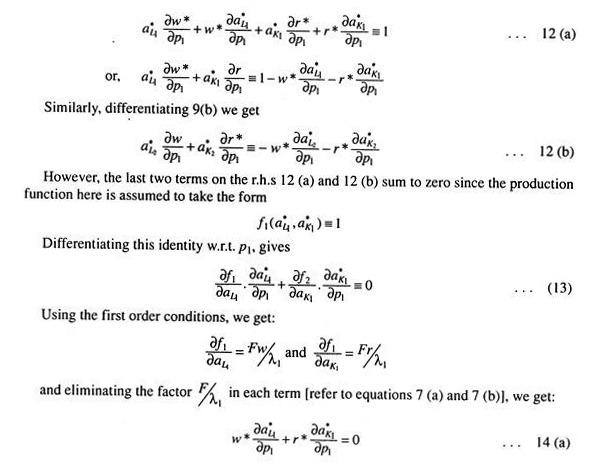 These results are the general SST. They suggest that if the price of food increases, the wage rate will rise, whereas the price of capital r will fall. If P1 rises, F increases and C falls, i e ∂F/∂p1 > 0 and ∂C/dP1< 0. As food industry expands and cloth-industry contracts, there is a net increase in the demand for labour and a fall in demand for capital.