In this article we will discuss about the Rybczynski theorem of international trade with its criticisms.

In both Heckscher-Ohlin theory and the factor- price equalisation theory, the assumption was taken that the factor endowments were fixed. T.M. Rybczynski, published a paper in 1955 to investigate the effect of an increase in the quantity of a factor of production upon production, consumption and the terms of trade.

Assumptions of the Rybczynski Theorem:

The Rybczynski theorem is based upon the following main assumptions:

(i) The trade takes place between two countries. The case of only one of the two countries will be discussed here.

(iv) The production of these commodities requires two factors—labour and capital.

(v) Capital and labour are perfectly mobile, perfectly divisible and substitutable in some degree.

(vii) There are the conditions of perfect competition in the product and factor markets.

(viii) The production functions related to both the commodities are homogenous of the first degree. That implies constant returns to scale in production.

(ix) The factor and commodity prices are constant.

(x) The supply of the factor labour expands while that of capital remains the same.

It is now clear that Rybczynki makes departure from H-O theorem and factor-price equalisation theorem in respect of his abandoning the assumption of fixed factor supplies. He discusses the effect of an increased supply of the factor in which the country is abundant upon production, factor and commodity prices and the terms of trade. His theorem is explained through Fig. 8.12. 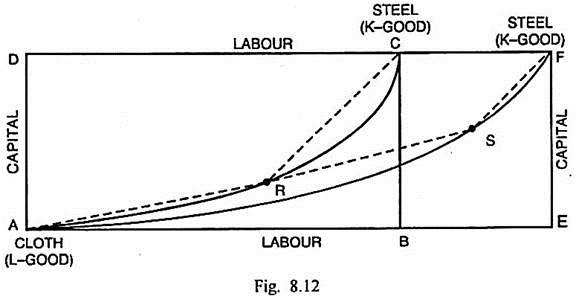 ABCD is the Edgeworth box concerning the given country. It shows that this country is labour- abundant and capital-scarce. A is the origin of the commodity cloth which is labour- intensive (L-good). C is the origin for the good steel which is capital- intensive (K-good). AC is the non-linear contract curve sagging downwards. The production takes place at R. The K-L ratio in cloth is measured by the slope of the line AR and K-L ratio in steel is measured by the slope of the line RC.

It is now supposed that the supply of labour is increased by BE, capital stock remaining the same, so that the new box diagram is AEFD. Now A and F are the points of origin for the goods cloth and steel respectively. AF is the non-linear contract curve. A is the origin for the L-good cloth and F is the origin for K-good steel. Production, in this case, takes place at S. The K-L ratio in cloth is measured by the slope of the line AS and the K-L ratio in steel is measured by the slope of the line SF.

When the factor- intensity in both the commodities remains the same, there will be no change in the prices of the two factors. It shows that the Rybczynaski theorem refutes the possibility of factor price equalisation. As the increase in the supply of labour in the labour-abundant country and increase in capital stock in the capital-abundant country leaves the prices of two factors unchanged, there can be no equalisation in the factor prices.

In this connection, it may be stated that increase in the supply of labour will result in the entire additional labour going into the labour-intensive industry. There will also be diversion of labour from the capital- intensive industry (steel). Along with the diversion of labour, some amount of capital will also be diverted from the steel industry to the labour-intensive cloth industry.

The constancy of the commodity prices implies that the terms of trade will remain unaffected. However, the equilibrium with constant prices, when supply of one factor has been increasing, is not compatible with general equilibrium. It may be possible if one of the two commodities, particularly the commodity intensive in the other factor (capital) is inferior. But neither of the two commodities— cloth and steel, can be considered inferior.

The general equilibrium in such a situation can be possible only if the price of the commodity intensive in the expanding factor decreases. It means the terms of trade are likely to become worse for the country in which one factor has been expanding. This is explained through Fig. 8.13. 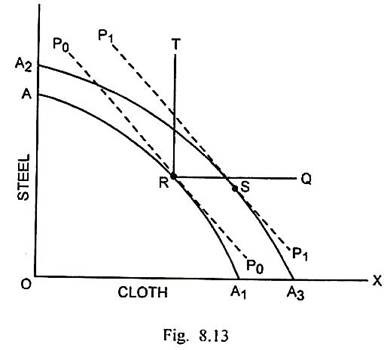 In Fig. 8.13, the labour-intensive commodity cloth is measured along the horizontal scale and the capital-intensive commodity steel is measured along the vertical scale. The production possibility curve AA­1 is derived from the box ABCD shown in Fig. 8.12. The international terms of trade are denoted by the slope of P0P0. The production equilibrium is determined at R.

The expanded supply of labour along with diversion of labour and capital from steel industry to cloth industry gives the new production possibility curve A2A3 derived from Box AEFD in Fig. 8.12. If the prices of two commodities remain the same, the terms of trade line P1P1 is parallel to P0P0. The production equilibrium takes place now at S where P1P1 is tangent to A2A3.

In such a situation, barring the inferior goods, the demand for both the goods must increase. Therefore, the new position of equilibrium must lie on that part of the production possibility curve A2A3 that lies between the lines RQ and RT. The slope of this segment on the curve A2A3 is less steep than the slope of AA1 at R. It implies that the price of cloth will be relatively lower and that of steel is relatively higher. A lower price of exportable commodity cloth and a higher price of importable commodity steel mean that there is deterioration of terms of trade subsequent to an increase in the supply of labour.

Criticisms of the Rybczynski Theorem:

E.J. Mishan has raised two major objections against the theorem given by Rybczynski. Firstly, if the increase in the supply of one factor (labour) is accompanied by the increased supply of the other factor (capital), the results suggested by Rybczynski are not likely to follow. Secondly, there is technical difficulty in extending Rybczynski’s two- factor model to a multi-factor system.