Harry M. Markowitz is credited with introducing new concepts of risk mea­surement and their application to the selection of portfolios. He started with the idea of risk aversion of average investors and their desire to maximise the expected return with the least risk.

Markowitz model is thus a theoretical framework for analysis of risk and return and their inter-relationships. He used the statistical analysis for measurement of risk and mathematical programming for selection of assets in a portfolio in an efficient manner. His framework led to the concept of efficient portfolios. An efficient portfolio is expected to yield the highest return for a given level of risk or lowest risk for a given level of return.

Markowitz generated a number of portfolios within a given amount of money or wealth and given preferences of investors for risk and return. Individuals vary widely in their risk tolerance and asset preferences. Their means, expenditures and investment requirements vary from individual to individual. Given the preferences, the portfolio selection is not a simple choice of any one security or securities, but a right combination of securities.

Risk and Reward are two aspects of investment considered by investors. The expected return may vary depending on the assumptions. Risk index is measured by the variance of the distribution around the mean, its range etc., which are in statistical terms called variance and covariance. The qualification of risk and the need for optimisation of return with lowest risk are the contributions of Markowitz. This led to what is called the Modern Portfolio Theory, which emphasizes the tradeoff between risk and return. If the investor wants a higher return, he has to take higher risk. But he prefers a high return but a low risk and hence the problem of a tradeoff.

As against this Traditional Theory that standard deviation measures the vari­ability of return and risk is indicated by the variability, and that the choice depends on the securities with lower variability, the modern Portfolio Theory emphasizes the need for maximization of returns through a combination of securities, whose total variability is lower.

The risk of each security is different from that of others and by a proper combination of securities, called diversification one can arrive at a combi­nation wherein the risk of one is offset partly or fully by that of the other. In other words, the variability of each security and covariance for their returns reflected through their inter-relationships should be taken into account.

Thus, as per the Modern Portfolio Theory, expected returns, the variance of these returns and covariance of the returns of the securities within the portfolio are to be considered for the choice of a portfolio. A portfolio is said to be efficient, if it is expected to yield the highest return possible for the lowest risk or a given level of risk.

A set of efficient portfolios can be generated by using the above process of combining various securities whose combined risk is lowest for a given level of return for the same amount of investment, that the investor is capable of. The theory of Markowitz, as stated above is based on a number of assumptions.

The Portfolio Theory of Markowitz is based on the following assumptions:

(1) Investors are rational and behave in a manner as to maximise their utility with a given level of income or money.

(2) Investors have free access to fair and correct information on the returns and risk.

(3) The markets are efficient and absorb the information quickly and perfectly.

(4) Investors are risk averse and try to minimise the risk and maximise return.

(5) Investors base decisions on expected returns and variance or standard deviation of these returns from the mean.

(6) Investors choose higher returns to lower returns for a given level of risk.

A portfolio of assets under the above assumptions is considered efficient if no other asset or portfolio of assets offers a higher expected return with the same or lower risk or lower risk with the same or higher expected return. Diversification of securities is one method by which the above objectives can be secured. The unsystematic and company related risk can be reduced by diversification into various securities and assets whose variability is different and offsetting or put in different words which are negatively correlated or not correlated at all.

Markowitz postulated that diversification should not only aim at reducing the risk of a security by reducing its variability or standard deviation, but by reducing the covariance or interactive risk of two or more securities in a portfolio. As by combination of different securities, it is theoretically possible to have a range of risk varying from zero to infinity.

Markowitz theory of portfolio diversification attaches importance to standard deviation, to reduce it to zero, if possible, covariance to have as much as possible negative interactive effect among the securities within the portfolio and coefficient of correlation to have – 1 (negative) so that the overall risk of the portfolio as a whole is nil or negligible.

Then the securities have to be combined in a manner that standard deviation is zero, as shown in the example below:

Possible combinations of securities (1) and (2):

xi = Proportion of portfolio invested in security i

rij = Coefficient of correlation between i and J

σi standard deviation of i

Given the following example, find out the expected risk of the portfolio.

Based on his research, Markowitz has set out guidelines for diversification on the basis of the attitude of investors towards risk and return and on a proper quantification of risk. The investments have different types of risk characteristics, some called systematic and market related risks and the other called unsystematic or company related risks. Markowitz diversification involves a proper number of securities, not too few or not too many which have no correlation or negative correlation. The proper choice of companies, securities, or assets whose return are not correlated and whose risks are mutually offsetting to reduce the overall risk.

For building up the efficient set of portfolio, as laid down by Markowitz, we need to look into these important parameters:

(2) Variability of returns as measured by standard deviation from the mean.

In general the higher the expected return, the lower is the standard deviation or variance and lower is the correlation the better will be the security for investor choice. Whatever is the risk of the individual securities in isolation, the total risk of the portfolio of all securities may be lower, if the covariance of their returns is negative or negligible.

For two security portfolio, minimise the portfolio risk by the equation-

The above concepts are used in the calculation of expected returns, mean standard deviation as a measure of risk and covariance as a measure of inter-relations of one security return with another.

Risk is discussed here in terms of a portfolio of assets. Any investment risk is the variability of return on a stock, assets or a portfolio. It is measured by standard deviation of the return over the Mean for a number of observations. 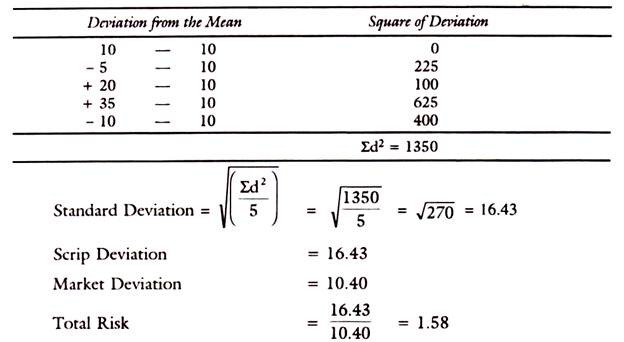 Mathematically, the covariance is defined as-

where Rx is return on security x, Ry return security Y, and R̅x and R̅y are expected returns on them respectively and N is the number of observations.

The covariance equation is as follows:

The coefficient of correlation can be set out as follows:

In Markowitz Model, we need to have the inputs of expected returns, risk measured by standard deviation of returns and the covariance between the returns on assets considered.