The below mentioned article provides quick notes on peak-load pricing.

It is a form of inter-temporal price discrimination based on efficiency.

For goods and services, demand peaks at particular times — for roads and public transport during commuter rush hours, for electricity during late afternoon and so on.

The firm sets MC = MR for each period, such that price P1 is high for the peak period, and the price P2 is lower for the off-peak period, with corresponding quantities Q1 and Q2. This increases the firm’s profit above what it would be if it charged one price for all periods. It is also efficient; the sum of producer and consumer’s surplus is greater because prices are closer to MC. 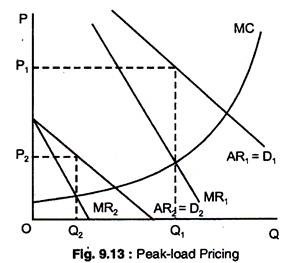 Peak-load pricing is different from third-degree price discrimination. With third-degree price discrimination, MR has to be equal for each group of consumers and equal to MC because the cost of serving the different groups are not independent. However, price and sales in peak and off-peak period can be determined independently by setting MC = MR for each period as Fig. 9.13 shows.

The owner of a movie theatre can determine the optimal prices for the evening and matinee shows independently, using estimates of demand in each period and of MC.

Advertising: Subject-Matter and Rule of Thumb (With Diagram)
3 Types of Taxes and the Equilibrium of the Monopolist (With Diagram)