The Law of Increasing Returns was propounded in the seventeenth century by Antonia Seera. This law is nothing but an improvement over the law of diminishing returns.

According to this law, “Production of a commodity increases in a larger proportion as compared to the increase in the units of factors of production.” For instance, we want to increase the production of shoes.

The producer increases factors of production by 20 per cent and as a result the production of shoes increases by 35 per cent.

Thus, we can say that the production of shoes obeys the Law of Increasing Returns. This law is also known as the Law of Diminishing Costs. It means cost per unit of the extra output falls as the industry expands.

“As the production of one factor in a combination of factors is increased up to a point, the marginal productivity of the factors will increase.” Benham

The law of increasing returns is based on the following assumptions:

1. Some factors of production should be divisible or variable.

2. Arrangement of fixed as well as variable factors can be made more effective

3. At least one factor of production is divisible.

Explanation of the law:

The present law can be explained in two forms i.e:

(i) Law of Increasing Returns and

(i) Law of Increasing Returns:

This fact is clear from table 5 and Figure 5. 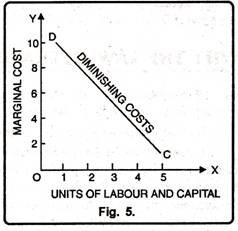 Law of increasing returns applies due to following reasons:

Perhaps the same is true for the building. When the output is undertaken, it is unthinkable that a good organizer will purchase that machinery which can meet the present needs of the market, but he will always establish or purchase that size of plant which has sufficient potential to increase the amount of the product.

It means there is always some idle capacity in factors of production which is deliberately kept by the organizers to expand its production. It is on account of this that an organizer or machinery or building or even labourer is lumpy or indivisible.

It is not possible for the employer to have more complex division of labour and advantageous combination of factors of production, when production is carried on small scale basis and labour intensive technique is adopted, i.e., emphasis is laid on the employment of more labour rather than capital.

Hence, it can be concluded that the law of increasing returns operates as a result of division of labour and specialisation.

Hence, economies that are available in large scale production, i.e., internal and external economies are helpful for operation of the law of increasing returns.

Why the Law Operates In Industry:

According to Dr. Marshall, the law of increasing returns is generally applicable to manufacturing industries as these units are dominated by man.

Its main reasons are under-stated:

Initially, as we employ more and more units of variable factors with fixed factors, productivity of both the factors increases. It is only on account of several external as well as internal economies in the form of innovations; marketing, publicity, management etc. accrue to the producer. Due to these economies total cost per unit falls while the total product increases at an increasing rate.

Generally, in the manufacturing industry, factors of production have elastic supply. It means demand of each factor can be increased whenever required. As we know, in the industrial sector, labour capital, and management play a pioneer role because these factors are elastic in supply which leads to the operation of this very law.

In the manufacturing industry, there is a wider scope for the division of labour. It means production can be divided and subdivided in a number of processes. Due to this advantage production is more than the proportionate increase in factors. Therefore, cost per unit goes on decreasing.

4. More Use of Machinery:

In the manufacturing industry, new inventions also play a positive role for the operation of the Law of Increasing Returns.

In manufacturing sector, the nature is not as strong as it is in agriculture sector. Rain, winter and summer have no effect on industries.

Man by his technical knowledge and far sightedness has succeeded in deferring the operation of the law of diminishing returns for a long period. Thus man is supreme. He plays a vital role for using the factors of production in a more proper way.

Similarities and Dissimilarities between the Law of Diminishing and Increasing Returns:

The Law of diminishing returns and increasing returns have similar as well dissimilar characteristics with each other.

1. Relationship of Input and Output:

The foremost similarity between the law of diminishing returns and increasing returns is that both laws establish relationship between input and output. They begin to operate as the efforts are made by the organizer to expand the production.

The law of increasing returns operate in the initial stage due to its idle capacity in the fixed factors of production while the law of diminishing returns operate in subsequent stage because that idle capacity is fully utilized. Therefore, both laws are said to be the two phases of a single tendency. Both laws show the change in cost of production when an effort is made to raise production.

The main points of difference between the law of diminishing returns and increasing returns.

1. Better Study of Cost of Production:

The law of increasing returns makes better study regarding cost of production by establishing relationship between input and output. But in case of diminishing returns, it is not true because cost per unit increases with the increase in production. Thus, the producer has to decide at every stage whether he should increase the production or not.

Law of Variable Proportions (With Diagrams)
Diseconomies of Scale of Production: Internal and External