Read this article to learn about the different Types of Games in Game Theory – explained with diagrams!

The different types of games are formed on the basis of number of players involved in a game, symmetry of the game, and cooperation among players.

The different types of games (as shown in Figure-1) are explained below:

Cooperative games are the one in which players are convinced to adopt a particular strategy through negotiations and agreements between players. Let us take the example cited in prisoner’s dilemma to understand the concept of cooperative games. In case, John and Mac had been able to contact each other, then they must have decided to remain silent. Therefore, their negotiation would have helped in solving out the problem.

In addition, in this structure, the feasible actions and pay offs of each players are also given. Let us understand the concept of extensive form games with the help of an example. Suppose organization A wants to enter a new market, while organization B is the existing organization in that market.

Figure-2 shows the decision tree for the present situation: 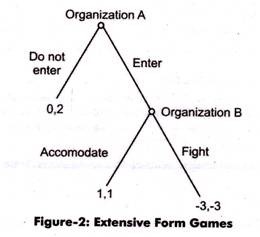 The payoff matrix for the two organizations is shown in Table-10:

The same example can also be used for the explanation of sequential move games. Suppose organization X is the first one to decide whether it should outsource the marketing activities or not.

The game tree that represents the decision of organization X and Y is shown in Figure-3:

Moreover, in zero sum game, the gain of one player is always equal to the loss of the other player. On the other hand, non-zero sum game are the games in which sum of the outcomes of all the players is not zero.