According to classicists, there will always be full employment in a free enterprise capitalist economy because of the operation of Say’s Law and wage-price flexibility.

This classical theory came under severe attack during the Great Depression years of 1930s at the hands of J. M. Keynes. He rejected the notion of full employment and instead suggested full employment as a special case and not a general case.

Full employment is a temporary phenomenon, an astrological coincidence.

He claimed his theory to be ‘general’, i.e., applicable at any point of time. That is why he christened his epoch-making book: The General Theory of Employment, Interest and Money (1936). Thus, Keynes’ theory is “general”. In this book, he not only criticised the classical macroeconomics, but also presented a ‘new’ theory of income and employment. He is often described by economists as a revolutionary one in the sense that it was Keynes who salvaged the capitalist economy from destruction in the 1930s. Critics, however, label him as a ‘conservative revolutionary’.

It is to be kept in mind that Keynes’ theory is a short run theory when population, labour force, technology, etc., do not change. Once Keynes remarked that since “in the long run we are all dead”, it is of no use to present a long run theory. In view of this, one can ar­gue that the volume of employment depends on the level of national income/output. Higher (lower) the level of national output higher (lower) is the volume of employment. Thus, Keynesian theory of employment deter­mination is also the theory of income deter­mination.

By ‘effective’ demand, Keynes meant the total demand for goods and services in an economy at various levels of employment. Total demand for goods and services by the people is the sumtotal of all demand meant for consumption and investment. In other words, the sum of consumption expenditures and investment expenditures constitute effec­tive demand in a two-sector economy.

where C stands for consumption expen­diture,

I stands for investment expen­diture, and

Employers hire and purchase various inputs and raw materi­als to produce goods. Thus, production in­volves cost. If sales revenue from the sale of output produced exceeds cost of production at a given level of employment and output, the entrepreneur would be induced to employ more labour and other inputs to produce more.

At any given level of employment of labour, aggregate supply price is the total amount of money that all entrepreneurs in the economy expect to receive from the sale of output produced by given number of labour­ers employed. For each particular level of employment, there is an aggregate supply price. Here, by ‘price’ we mean the amount of money received from the sale of output, i.e., sales proceeds.

4. Equilibrium Level of Employment— The Point of Effective Demand:

Note that the AS curve starts from the ori­gin. If aggregate receipts (i.e., GNP) are zero, entrepreneurs would not hire workers. Like­wise, AD curve also starts from the origin. The equilibrium level of employment is deter­mined by the intersection of the AS and AD curves. This is the point of effective demand— point E in Fig. 3.4. Corresponding to this point, OLE workers are employed. At the OL1 level of employment, expected receipts exceed nec­essary costs by the amount RC. Entrepreneurs will now go on hiring more labour till OLE level of employment is reached. 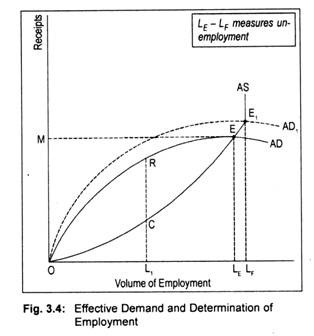 Keynes made little emphasis to the aggre­gate supply function since its determinants (such as technology, supply or availability of raw materials, etc.,) do not change in the short run. Keynes was examining the possibility of unemployment in a capitalistic economy against the backdrop of Great Depression of the 1930s.

After diagnosing the problem, Keynes recommended policy prescription so as to create more employment in the economy. Indeed, for curing unemployment problem, he did not subscribe to the classical ideas—the supply-oriented policies. Keynes attached great importance to demand-stimulating poli­cies to cure unemployment. In other words, Keynes paid emphasis on the aggregate de­mand function. That is why Keynes’ theory is known as a ‘theory of aggregate demand’.

But there is a limit to consumption expenditure. So what is needed is the raising of (private) investment demand. Anyway, an increase in consump­tion demand and investment demand will raise the level of employment in the economy. The point of effective demand has been changed because of the shifting of AD curve from AD to AD1New effective demand is now given by E1 Corresponding to this point, equilibrium level of employment is OLF—the level of full employment.

A capitalist economy will always experience underem­ployment equilibrium—an equilibrium situ­ation less than full employment. Full employ­ment, according to Keynes, can never be achieved. In Keynes’ scheme of things, both consumption and investment cannot be raised enough to employ more work force. Therefore, he recommends government to come forward and take appropriate action to cure unemploy­ment problem.