Keynes rejected the classical conclusion of full employment in a capitalist economy. The worldwide depression of the 1930s gave birth to Keynesian economics.

According to Keynes, full employment situation is a sort of astrological coincidence.

In establishing his theory of involuntary unemployment, Keynes rejected the classical assumption of wage-price flexibility. Money wages are rigid or inflexible in the downward direction. They are flexible, however, in the upward direction. There are two reasons for wage inflexibility. First is the money illusion. Second is the institutional reason. Trade unions prevent wage rate from falling. Thus, any wage cut will be resisted. Or wage rate cannot fall below a certain level. However, there is nothing which prevents money wages from rising. Once full employment is reached, wages may rise.

This Keynesian argument suggests that labour supply function, unlike the classical system, is a function of the money wages, rather than real wages, i.e., 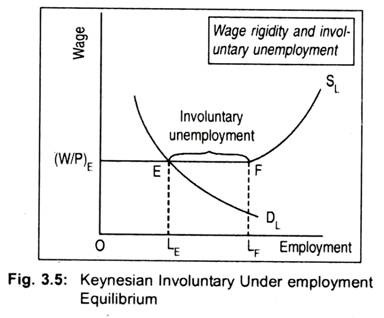 Labour demand curve, however, in the Keynesian system, is assumed to be negatively related to the real wage rate. D, curve shows this relationship.

As usual, equilibrium in the labour mar­ket is established when labour demand curve intersects the labour supply curve at its hori­zontal portion. Thus, point E describes under­employment equilibrium. Corresponding equilibrium real wage rate is (W/P)E. At this wage rate, LF people are willing to work while LE people are employed the difference be­tween the two (LE – LF or EF) measures invol­untary unemployment. Like the classical sys­tem, there are no automatic forces in an economy to mention full employment or to restore full employment equilibrium in the Keynesian system.

According to Keynes, wage rigidity is the cause of involuntary unemployment. This means that a free enterprise capitalist economy always fails to reach full employment because of wage rigidity. He also gave two other rea­sons—(i) liquidity trap, and (ii) interest inelas­ticity of investment—for the failure of a capi­talist economy to reach the state of full em­ployment.