When in an economy aggregate demand falls short of aggregate supply at full employment’, the demand is said to be a deficient demand, and the difference is called deflationary gap.

In other words, it means that demand is not sufficient or adequate to eliminate involuntary unemployment. It indicates that there are people who are willing to take up Jobs at the prevailing wage rate but the economy cannot provide jobs to them because current AD falls short of aggregate demand required to reach the level of full employment. Thus, deficient demand is a situation of under-employment equilibrium.

(i) Deficient demand leads to fall in prices which in turn lead to fall in level of income, output and employment

(ii) A persistent fall in deficient demand leads to state of depression in the economy.

The gap is called deflationary because it leads to deflationary situation (continuous fall in prices). For instance, suppose an economy by utilising all its available resources can produce 10,000 qtls of rice. If the actual aggregate demand for rice is, say, 8,000 qtls, this demand will be termed as deficient demand and the gap of 2,000 qtls as deflationary gap. 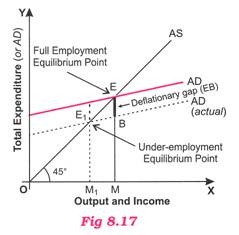 The reasons of fall or deficiency in demand are obviously fall in the constituents or components of aggregate demand. We have seen in Section 8.4 that main components of aggregate demand are consumption and investment. Thus, the main cause of deficiency in demand is (i) fall in the levels of consumption and investment. In addition other causes of deficient demand are (ii) fall in total supply of money in the country either because of contraction of credit facilities by the banks or fall in supply of currency by the government, (iii) decrease in disposable income due to rise in tax rates and (iv) increase in propensity to save.

Causes are (i) Fall in government expenditure, (ii) Fall in level of Autonomous investment, (iii) Decrease in Marginal Propensity to consume (MFC) and (iv) Fall in Supply.