Introduction, consumer’s surplus was introduced in economics by Alfred Marshall, although the use of the concept goes back at least to the Freanch economist Dupuit writing in the first half of the nineteenth century.

The doctrine of consumer’s surplus is a deduction from the law of diminishing marginal utility. The price that we pay for a thing measures only the marginal utility, but not the total utility. Only on the marginal unit, which a man is just induced to buy, the price is exactly equal to the satisfaction that he expects to get from that unit. But, on other units that he buys, he enjoys some extra amount of satisfaction.

It represents the excess of satisfac­tion that he secures, the excess being equal to the difference between the utility of the goods acquired and that of the money sacrificed. Had he been deprived of the commodity, he would then have been forced to spend the money on the purchase of other commodities from which he does not derive the same amount of satisfaction, but less.

Alfred Marshall has introduced the term ‘consumer’s surplus’ in eco­nomic theory to show that, in various situations consumer receives more from a commodity than he pays for it.

“The price which a person pays for a thing can never exceed and seldom comes up to that which he would be willing to pay rather than go without it – so that the satisfaction which he gets from its purchase generally exceeds that which he gives up in paying away its price: and he thus derives from the purchase a surplus of satisfaction”.

The excess of the price which he would be willing to pay rather than go without the thing, over that which he actually does pay, is the economic measure of this surplus satisfaction. In short, the benefit which a person derives from purchasing, at a low price, thing for which he would rather pay a high price, than go without it may be called his consumer’s surplus.

At times, we find that a consumer’s willingness to pay for a commodity may be greater than the price he actually pays for it. The price that he is ready to pay for a commodity is his individual demand price and the price he actually pays for it is the market price. According to Paul Samuelson, consumer’s surplus is nothing but the excess of the individual demand price over the market price of a commodity (or, the positive difference between the potential price and the actual price of a commodity).

Hence, the consumer’s surplus may be shown in another way:

Consumer’s Surplus = Total Utility – (Total units purchased x marginal utility or price). In short, consumer’s surplus is the positive difference between the total utility from a commodity and the total payments made for it.

The concept of consumer’s surplus can also be illustrated with the help of Fig. 3: 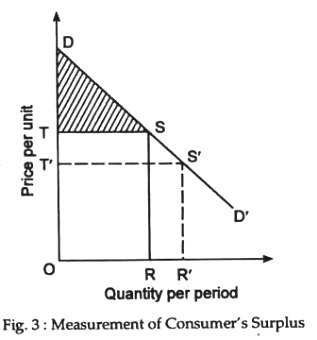 In Fig. 3, the quality of a particular commodity is measure on the horizontal axis and its marginal utility or production on the vertical axis. Here DD’ is the demand price for it. If a consumer buys all the units (OR) at RS price per unit, he gets a total satisfaction equal to the area DORS. But, he spends only ORST amount of money, so his surplus satisfaction is DTS (i.e., the shaded area). If the price falls to R’ S’, he would buy OR’ and his surplus would increase to DTS’.

So, consumer’s surplus is measured by the area under the demand curve but above the market price. A difficulty is that as the price falls the demand where, the real income of the consumer increases. To get a more accurate measure of the benefit of the surplus; therefore, an adjustment must be made to offset the effect of the difference in real income at the higher price (RS) and the lower price (R’S’).

Consumer’s surplus is measured by the area under an individual’s demand curve between two prices. It is a monetary measure, although originally represented in terms of surplus utility by Marshall. It is a measure of the benefit to the consumer, net of the sacrifice he has to make from being able to buy a commodity at a particular price. However, Marshall’s doctrine of consumer’s surplus is subject to a number of criticisms, mainly due to various difficulties associated with this measurement.

The main criticisms of the doctrine are the following:

Marshall’s doctrine of con­sumer’s surplus is based on the assumption of constant marginal utility of money. Hicks considers this to be the greatest difficulty in accepting the concept of consumer’s surplus. As he put it, “A stronger incentive will be required to induce a person to pay a given price for anything if he is poor than if he is rich. A pound is the measure of the less pleasure, or satisfaction, of any kind, to a rich man than to a poor one.”

It is true that Marshall’s assumption of constant marginal utility of money becomes valid when a consumer spends a very small proportion of his income for a commodity. But, this assumption is not always realistic, for a consumer is often required to spend a large portion of his income for a commodity (e.g., expenditure on foodstuff by a poor household).

The accurate measurement of con­sumer’s surplus is not possible as we have no knowledge of the potential prices that a consumer is willing to pay for the earlier units of the commodity purchased. In fact, the individual demand prices for the earlier units of the commodity are merely hypothetical and imaginary. For this reason, Prof. Nicholson remarks that the concept of consumer’s surplus is purely hypo­thetical and more a figment than a fact.

(4) Unlimited Consumer’s Surplus in the Case of Necessities:

It is also pointed out that the consumer’s surplus cannot be measured in the case of necessaries and of conventional necessaries of life as their utility (or the individual demand prices for these goods) is infinite or indefinite to a consumer. It is very often found that a consumer is sometimes willing to pay anything under his possession for these goods when he is in urgent need of them, and this makes the individual demand prices for these goods to be infinite. Examples of such goods are textbooks or life-saving drugs.

Tausig has pointed out that the concept of consumer’s surplus cannot be applied in the case of articles of conspicuous consumption (e.g., for coats of diamonds). The term was used by Thorstesin Veblem (1857-1929) to identify that ostentatious personal expenditure which satisfies no physical need but rather a psychological need for the esteem of others.

Goods may be purchased not for their practical use but as ‘status symbols’ and to ‘keep up with the Joneses’. These goods have a high prestige value to their users, but their utility falls when their prices fall. In such cases, a fall in the prices causes a fall in consumer’s surplus — a result which becomes inconsistent with the definition of con­sumer’s surplus.

Furthermore, Marshall’s analysis of consumer’s surplus is based on an important premise that the utility of a thing can be measured and numbered. But, most of the modern writers have shown that utility, being a psychological concept, cannot be cardinally (objectively) measured and quantified.

(7) Difficulties in the Case of Complements and Substitutes:

Again, consumer’s surplus cannot be measured in the case of complementary goods (e.g., tea and coffee, etc.) Because, in such cases the utility of a thing depends not only on its total stock but also on the supply of other related goods. Marshall has tried to overcome this difficulty by suggesting that we should treat the related goods as one commodity and group them under one common demand schedule. But, actually, it is not possible to do so.

Prof. Nicholson has ex­pressed serious doubts about the utility of the whole doctrine. He asked, “Of what avail is it to say that the utility of an income of (say) £ 100 a year is worth (say) £ 1000 a year?” According to him, the doctrine is thus purely hypothetical and unreal.

Prof. Little has characterised the concept of consumer’s surplus as “a totally useless theoretical toy” as it cannot provide us any practical objective criterion for measuring economic welfare.

Owing to various difficulties in measuring consumer’s surplus as explained by Marshall, J.R. Hicks has formulated the concept of consumer’s surplus in a different way. In his opinion, “the best way of looking at consumer surplus is to regard it as a means of expressing, in terms of money income, the gain which accrues to the consumer as a result of a fall in price”.