Commercial banks are the most important components of the whole banking system.

A commercial bank is a profit-based financial institution that grants loans, accepts deposits, and offers other financial services, such as overdraft facilities and electronic transfer of funds.

“Commercial Banks are the institutions that make short make short term bans to business and in the process create money.”

In other words, commercial banks are financial institutions that accept demand deposits from the general public, transfer funds from the bank to another, and earn profit.

Commercial banks play a significant role in fulfilling the short-term and medium- term financial requirements of industries. They do not provide, long-term credit, so that liquidity of assets should be maintained. The funds of commercial banks belong to the general public and are withdrawn at a short notice; therefore, commercial banks prefers to provide credit for a short period of time backed by tangible and easily marketable securities. Commercial banks, while providing loans to businesses, consider various factors, such as nature and size of business, financial status and profitability of the business, and its ability to repay loans.

Commercial banks are of three types, which are as follows:

Refer to a kind of commercial banks in which major part of share capital is held by private businesses and individuals. These banks are registered as companies with limited liability. Some of the Indian private sector banks are Vysya Bank, Industrial Credit and Investment Corporation of India (ICICI) Bank, and Housing Development Finance Corporation (HDFC) Bank.

Refer to commercial banks that are headquartered in a foreign country, but operate branches in different countries. Some of the foreign banks operating in India are Hong Kong and Shanghai Banking Corporation (HSBC), Citibank, American Express Bank, Standard & Chartered Bank, and Grindlay’s Bank. In India, since financial reforms of 1991, there is a rapid increase in the number of foreign banks. Commercial banks mark significant importance in the economic development of a country as well as serving the financial requirements of the general public.

The functions of commercial banks are broadly classified into primary functions and secondary functions, which are shown in Figure-1:

The functions of commercial banks (as shown in Figure-1) are discussed as follows:

Refer to the basic functions of commercial banks that include the following:

Implies that commercial banks are mainly dependent on public deposits.

There are two types of deposits, which are discussed as follows:

Refer to kind of deposits that can be easily withdrawn by individuals without any prior notice to the bank. In other words, the owners of these deposits are allowed to withdraw money anytime by simply writing a check. These deposits are the part of money supply as they are used as a means for the payment of goods and services as well as debts. Receiving these deposits is the main function of commercial banks.

Refer to deposits that are for certain period of time. Banks pay higher interest on rime deposits. These deposits can be withdrawn only after a specific time period is completed by providing a written notice to the bank.

Refers to one of the important functions of commercial banks. The public deposits are used by commercial banks for the purpose of granting loans to individuals and businesses. Commercial banks grant loans in the form of overdraft, cash credit, and discounting bills of exchange.

Refer to crucial functions of commercial banks. The secondary functions can be classified under three heads, namely, agency functions, general utility functions, and other functions.

These functions are explained as follows:

Implies that commercial banks act as agents of customers by performing various functions, which are as follows:

Refer to one of the important functions of commercial banks. The banks collect checks and bills of exchange on the behalf of their customers through clearing house facilities provided by the central bank.

Constitute another major function of commercial banks. Commercial banks collect dividends, pension, salaries, rents, and interests on investments on behalf of their customers. A credit voucher is sent to customers for information when any income is collected by the bank.

Implies that commercial banks make the payments of various obligations of customers, such as telephone bills, insurance premium, school fees, and rents. Similar to credit voucher, a debit voucher is sent to customers for information when expenses are paid by the bank.

Include the following functions:

Implies that commercial banks provide locker facilities to its customers for safe keeping of jewellery, shares, debentures, and other valuable items. This minimizes the risk of loss due to theft at homes.

Refers to transferring of funds from one bank to another. Funds are transferred by means of draft, telephonic transfer, and electronic transfer.

Refers to one of the important functions of commercial banks that help in increasing money supply. For instance, a bank lends Rs. 5 lakh to an individual and opens a demand deposit in the name of that individual.

Bank makes a credit entry of Rs. 5 lakh in that account. This leads to creation of demand deposits in that account. The point to be noted here is that there is no payment in cash. Thus, without printing additional money, the supply of money is increased.

Include services, such as debit cards, credit cards, and Internet banking. 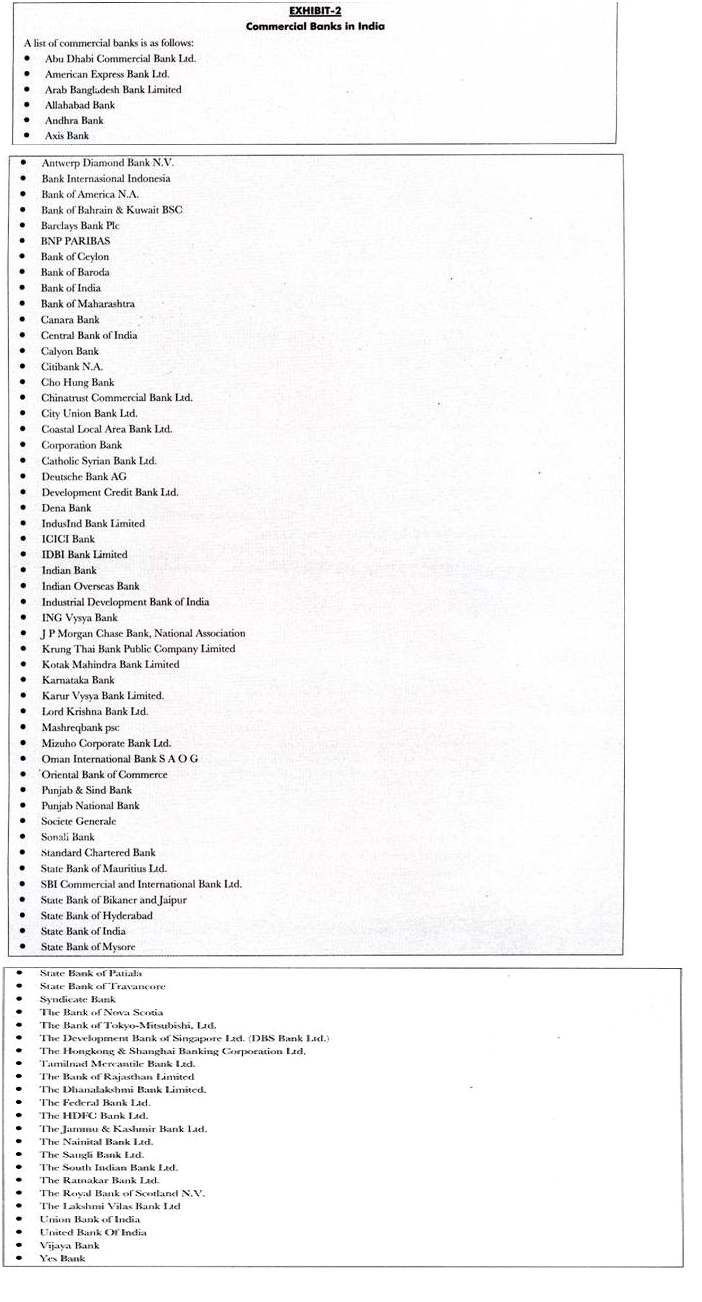 A commercial bank offers short-term loans to individuals and organizations in the form of bank credit, which is a secured loan carrying a certain rate of interest.

There are various types of bank credit provided by a commercial bank, as shown in Figure-2:

Bank loan may be defined as the amount of money granted by the bank at a specified rate of interest for a fixed period of time. The commercial bank needs to follow certain guidelines to extend bank loans to a client. For example the bank requires the copy of identity and income proofs of the client and a guarantor to sanction bank loan. The banks grant loan to clients against the security of assets so that, in case of default, they can recover the loan amount. The securities used against the bank loan may be tangible or intangible, such as goodwill, assets, inventory, and documents of title of goods.

The advantages of the bank loan are as follows:

a. Grants loan at low rate of interest

e. Consumes less time because of modern techniques and computerization

In addition to advantages, the bank loan suffers from various imitations, which are as follows:

a. Imposes heavy penalty and legal action in case of default of loan

b. Charges high rate of interest, if the party fails to pay the loan amount in the allotted time

c. Adds extra burden on the borrower, who needs to incur cost in preparing legal documents for procuring loans

d. Affects the goodwill of the organization, in case of delay in payment

Cash credit can be defined as an arrangement made by the bank for the clients to withdraw cash exceeding their account limit. The cash credit facility is generally sanctioned for one year but it may extend up to three years in some cases. In case of special request by the client, the time limit can be further extended by the bank.

The extension of the allotted time depends on the consent of the bank and past performance of the client. The rate of interest charged by the bank on cash credit depends on the time duration for which the cash has been withdrawn and the amount of cash.

The advantages of the cash credit are as follows:

a. Involves very less time in the approval of credit

b. Involves flexibility as the cash credit can be extended for more time to fulfill the need of the customers.

c. Helps in fulfilling the current liabilities of the organization

The cash credit is one of the most important instruments of short-term financing but it has some limitations.

These limitations are mentioned in the following points:

a. Requires more security for the approval of cash

c. Depends on the consent of the bank to extend the credit amount and the time limit

The advantages of the bank overdraft are as follows:

a. Involves no documentation for the extension of overdraft amount

b. Imposes nominal interest on the overdraft amount

c. Charges fee only on the amount exceeding the account limit

The disadvantages of the bank overdraft are as follows:

a. Incurs high cost for the clients, if they fail to pay the amount of overdraft for a longer period of time

b. Hampers the reputation of the organization, if it fails to pay the amount of overdraft on time

c. Allows the bank to deduct overdraft amount from the customers’ accounts without their permission

Discounting of bill is a process of settling the bill of exchange by the bank at a value less than the face value before maturity date. According to Sec. 126 of Negotiable Instruments, “a bill of exchange is an unconditional order in writing addressed by one person to another, signed by the person giving it, requiring the person to whom it is addressed to pay on demand or at fixed or determinable future time a sum certain in money to order or to bearer.”

The facility of discounting of bill is used by the organizations to meet their immediate need of cash for settling down current liabilities.

Conditions laid down by the bank for discounting of bill are as follows:

a. Must be intended to specific purpose

b. Must be enclosed with the signature of the two persons (company, bank or reputed person)

c. Must be less than the face value

d. Must be produced before the maturity period.