Productivity Level of Ag­riculture defines as the amount of crops production in per hectare land. 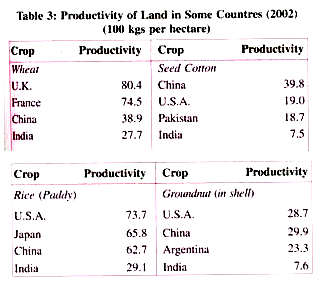 Factors Responsible for how Productivity:

There are several factors responsible for low productivity of Indian agriculture.

These are listed below:

In India rural social environment is itself an important cause behind low productivity. Indian farmers are lazy, illiterate, superstitious, primitive outlook, conservative, unfit and unresponsive to the modern method of cultivation. According to G.S. Sahato, the marginal productivity of farmer is zero in agriculture due to family-based cultivation process.

Indian agriculture is characterized by huge population pressure. According to 2001 Census, about 72.2% of total population lived in rural areas and about three-quarters of total rural working population, i.e., nearly 228 million workers (out of 310.7 million workers) was engaged in the agriculture sector. Due to rise in population, uneconomic subdivisions of land take place. All these lead to low productivity.

According to Government of India, about 329 million hectares (half of the land) have already been degraded. This results in 33 to 67 percent of yield loss. Moreover, 5% of land has been damaged so badly that it cannot be used further.

Although Zamindari system had been abolished in India, but the rural big farmers are still playing their shadow roles. These big landowners are regulating rent, tenure system and rights of tenancy etc for tenants. Thus the position of tenants are going worse day by day. In this type of tenure system, it extremely difficult to raise productivity by only applying modern technologies,

According to the study of Raj Krishna, due to insufficient and inadequate availability of agricultural loans at minimum rate of interest the poor farmers cannot properly invest money on the land during the peak season of cultivation. Moreover, the marketing of the agricultural crops is regulated by middlemen or touts. All these resulted in low agricultural productivity.

Several measures have been adopted from the view of socio-economic angles to raise the productively of Indian agricultural system.

There are as follows:

(i) Proper Implementation of Land Reforms:

Proper implementation of land reforms and land tenure system can bring up the productivity rate of Indian agriculture. After independence, except West Bengal and Kerala land reform programme has not been successfully implemented. Hence more endeavor has been required from the part of the government of other states to raise productivity. The famous slogan, ‘land to the tiller’, must be turned into reality.

Positive efforts have been taken by the government to educate the illiterate poor farmers about the new methods of technical farming. All the marginal farmers and tillers must know how to introduce latest scientific technology in the cultivable lands. This will increase the productivity.

As already said, 329 million hectares of land degraded. Hence an integrated and efficient management of our land is very necessary, the Tenth five year Plan lots of initiatives have been taken in these areas.

Proper implementation of ‘Package Programme (i.e. irrigation, high yielding variety seeds chemical fertilizers, modern machineries etc. is necessary to increase the productivity of the soil. The effects of green revolution are huge All these not only increase the fertility of land, but change the single time crop producing land into multi-production. In India most the lands are unfertile and have no permanent water flowing system. Thus per hectare production is very poor. Therefore, the government has to take positive initiatives! Implements ‘Package Programme’ throughout every corner of the country. These will help to increase the fertility of the soil.

According to agricultural scientists in India nearly 5% of the total crop production are destroyed by different insects, pests and diseases. Maximum farmers are ignorant about the use of insecticides and pesticides. Hence to increase productivity the government must take initiatives to start several programmes.

To apply ‘Package Programme’ the farmers need adequate amount of low rate of interest credit facilities. Farmers should get easy loans at the beginning of the cultivation so that they can use all the modern technologies in the land and improve both crop production and productivity. Not only that, the government must pay proper attention to expand the agricultural market from remote corners villages to urban areas so that sufficient amount of marketable surpluses can be generated,

(vi) Encouragement to the producers:

Government must encourage the producers by giving various incentives like:

(a) By giving agricultural subsidy;