The simple meaning of ‘utility’ is ‘usefulness’. In economics utility is the capacity of a commodity to satisfy human wants.

Utility is the quality in goods to satisfy human wants. Thus, it is said that “Wants satisfying capacity of goods or services is called Utility.”

In this way utility is measured in terms of money and it is relative. There is difference between utility and usefulness. A useful commodity may not here utility of goods depend upon the intensity of wants.

A consumer buys or demands a particular commodity he derives some benefit from its use. He feels that his given want is satisfied by the use or consumption of the commodity purchased. Utility is the basis of consumer demand. A consumer thinks about his demand for a commodity on the basis of utility derived from the commodity.

Utility depends upon the intensity of want. When a want is unsatisfied or more intense, there is a greater urge to demand a particular commodity which satisfies a given want. In modern time utility has been called as ‘expected satisfaction.’ Expected satisfaction may be less or equal to or more than the real satisfaction.

1. According to Prof. Waugh:

“Utility is the power of commodity to satisfy human wants.”

“On the whole in recent years the wider definition is preferred and utility is identified, with desireness rather than with satisfyingness.”

The following are the important characteristic features of utility:

1. Utility has no Ethical or Moral Significance:

A commodity which satisfies any type of want, whether moral or immoral, socially desirable or undesirable, has utility, i.e., a knife has utility as a household appliance to a housewife, but it has also a utility to a killer for stabbing some body.

Utility of a commodity depends on a consumer’s mental attitude and assessment regarding its power to satisfy his particular want. Thus, utility of a commodity may differ from person to person. Psychologically, every consumer has his likes and dislikes and everyone determines his own level of satisfaction.

A consumer who is fond of apples may find a high utility in apples in comparison to the consumer who has no liking for apples. Similarly a strictly vegetarian person has no utility for mutton or chicken.

3. Utility is always Individual and Relative:

Utility of a commodity varies in different situations in relation to time and place. Even the same consumer may derive a higher or lower utility for the same commodity at different times and different places. For example—a person may find more utility in woolen clothes during the winter than in summer or at Kashmir than at Mumbai.

4. Utility is not Necessarily Equated with Usefulness:

Utility simply means the ability to satisfy a want. A commodity may have utility but it may not be useful to the consumer. For instance—A cigarette has utility to the smoker but it is injurious to his health. However, demand for a commodity depends on its utility rather than its usefulness. Thus many commodities like opium liquor, cigarettes etc. have demand because of utility, even though, they are harmful to human beings.

Utility being a subjective phenomenon or feeling of a consumer cannot be expressed in numerical terms. So utility cannot be measured cardinally or numerically. It cannot be measured directly in a precise manner. Professor Marshall has however, unrealistically assumed cardinal measurement of utility in his analysis of demand.

6. Utility Depends on the Intensity of Want:

Utility is the function of intensity of want. A want which is unsatisfied and greatly intense will imply a high utility for the commodity concerned to a person. But when a wan is satisfied in the process of consumption it tends to experience a lesser utility of the commodity than before. Such an experience is very common and it is described as a tendency of diminishing utility experienced with an increase in consumption of a commodity. In other words, the more of a thing we have, the less we want it.

7. Utility is Different from Pleasure:

A commodity may have utility but its consump­tion may not give any pleasure to the consumer, e.g., medicine or an injection. An injection or medicinal tablet gives no pleasure, but it is necessary for the patient.

8. Utility is also Distinct from Satisfaction:

Utility and satisfaction, both are though inter-related but they have not been considered as the same in a strict sense.

In economics, production refers to the creation of utilities in several ways.

Thus, there are following types of utility:

This utility is created in rendering personal services to the customers by various professionals, such as lawyers, doctors, teachers, bankers, actors etc.

Can Utility be Measured?

Utility is a psychological concept. This is different for different people. Therefore, it cannot be measured directly. Professor Marshall has said that “Utility can be measured and its measuring rod is ‘money. The price which we are ready to pay for an article is practically its price. Nobody will be prepared to pay more than the utility which we derive from the article.

If I am ready to pay Rs. 1500 for a watch and Rs. 2,000 for a Radio. Then I can say that I derive utility from that watch up to the value of Rs. 1500; and from Radio up to the value of Rs. 2,000. “The inference which we can draw from the above example is that the price which we pay for any article is the utility which we derive from that article.” But Prof. Hicks, Allen and Pareto have not supported Marshall’s view of measuring utility.

They are of this opinion that measuring of utility is not possible because of the following reasons:

(i) Utility is personal, psychological and abstract view which cannot be measured like goods.

(ii) Utility is different for different people. Utility is always changeable and it changes according to time and place. Therefore, it is difficult to measure such thing who is of changeable nature.

Utility are of three kinds:

It is the net addition to total utility made by the utility of the additional or extra units of the commodity in its total stock. It has been said—as the last unit in the given total stock of a commodity.

According to Prof. Boulding—”The marginal utility of any quantity of a commodity is the increase in total utility which results from a unit increase in its consumption.”

Kinds of Marginal Utility—Marginal utility is of three kinds:

It is a matter of general experience that if a man is consuming a particular goods, then receiving of next unit of goods reduces the utilities of the goods and ultimately a situation comes when the utility given by the goods become zero and if the use of the goods still continues, then the next unit will give dis-utility. In other words it can be said that we will derive “negative utility”.

This can be studied better by the following table:

From the table given above it is clear that up to the consumption of the fifth bread we receive positive utility; 6th unit is the unit of full satisfaction i.e., Utility derive from that unit is zero. From 7th unit the utility received will be negative utility. The table can be represented in shape of diagram as follows: In diagram No. 1 OX axis (line) shows unit of bread and OY line shows the Marginal Utility received. From the figure it is clear that from the first unit of bread utility received are 20 which has been shown on the top of the line. 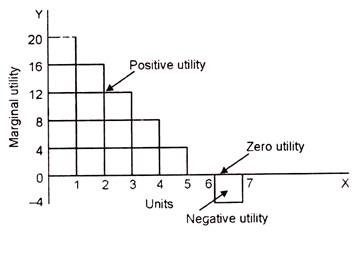 Similarly 2, 3, 4, 5 Unit of bread’s utility is 16, 12, 8, 4 respectively All these have been shown on OX line which shows positive marginal utility. Utility of the sixth bread is zero and that of the seventh bread is negative and negative rectangle has been shown below OX line.

Negative Utility is that utility where if the consumption of a commodity is carried to excess, then instead of giving any satisfaction, it may cause dis-satisfaction. The utility is such cases is negative. In the table given above the marginal utility of the 7th unit is negative.

Suppose, a man consumes five breads at a time. He derives from first bread 20 units of satisfaction from 16, from third 12, from fourth 8 and from fifth 4 i.e., total 60 units.

This can be shown by the following table:

The following table will explain the point clearly:

It is clear from the above table that by the increasing use of any article Marginal and Average Utility reduces gradually and Total Utility increases only up to that point where the Marginal Utility comes to zero.

(iii) After zero when Marginal Utility is negative then there is reduction in Total Utility.

Relationship between Marginal Utility and Total Utility can be studied from the following:

The relationship between Marginal Utility and Total Utility will be shown by diagram as follows:

(1) Marginal Utility goes on diminishing with the consumption of every additional unit of bread.

(2) Total Utility goes on increasing with the consumption of every additional unit but at a diminishing rate.

(4) When Marginal Utility becomes 0, total utility does not increase.