Trade unions are often seen as a monopolistic element in the market which distributes the efficient allocation of resources. Trade union do this by restricting the supply of labour. This is why the Nobel Laureate Friedrich A. Von Hayek comments: “Powers of unions have become the biggest obstacle to raising the living standards of the working class. They are the primary source of employment.”

Trade unions are organisations of workers who represent the collective interests of their workers and whose aim is higher wages. Trade unions normally raise wages by restricting the supply of L. So, a union must be prepared to trade-off higher wage against employment losses.

Fig. 10 illustrates the economic impact of successful union efforts to obtain above-equilibrium wages for their members. To start with we assume (1) that all labour is demanded by the two competitive industries x and y(2) that all workers receive the same wage, and (3) that jobs in the two industries have identical non-wage characteristics. In such a situation all workers receive the same wage, Wc.

Now, let us assume that workers in industry x in Fig. 10(a) are organised into a trade union that immediately negotiates a wage of Wu. The effective supply schedule to industry x becomes WuFGLs. The result is a higher wage and lower employment. Those who have lost jobs may be expected to move into non-unionised industry y [Fig. 10(b)], raising employment and lowering wages in industry y.

Unacceptable job losses constrain the union from seeking a higher wage than Wu. For any wage increase, employment loss is greater the more elastic the labour demand schedule. Thus, unions press harder to raise wages when demand elasticity is low.

Unions are in a strong position when:

(1) The available substitutes for union labour are few,

(2) The demand for the product is fairly inelastic, and

(3) The ratio of labour costs to total costs is low.

Unions usually do not accept restrictions on their ability to raise wages. Instead, organised labour strives to improve the trade-off between wages and employment. The best way to raise wages and employment at the same time is to shift the labour-demand curve to the right and reduce its elasticity. Unions also support policies that prevent workers from accepting a wage lower than the one set by the union.

Policies to Alter the Demand Curve:

Wages increases motivate employers to look for substitutes – either cheap labour or other inputs to substitute for labour, or both. Unions try to offset these forces. They encourage consumers to buy more union-made products. Unions also negotiate restrictive work rules to limit employers’ opportunity to reduce employment. These work rules are known as feather bedding practices.

Unions also try to increase their membership over time by covering a significant portion of entire industry. The more non-union firms and work­ers, the greater the number of substitutes for union labour and the greater the elasticity of demand for the unionised firm’s product.

However, a large number of unemployed workers is a potential threat to a union. If the unemployed are willing to work for less than the union wage, non-union firms will hire than and produce at lower cost. This would force the union to lower its wage demands to allow organised firms to compete. Union leaders worry that the unemployed will become a non-union substi­tute.

The Effects of Unions: Monopsony:

In the absence of a union, the monopsonist employs Lm workers, where MRP = MC, and pays a wage of Wm. Now, suppose, a union is organised to counter the firm’s monopsony power. It bargains for a wage of Wu. The union wage flow (i.e., mini­mum wage set by un­ion) changes the labour supply schedule to WuELs, as in Fig. 11. Im­portantly, the new MC curve of labour is equal to Wu up to Lu workers. 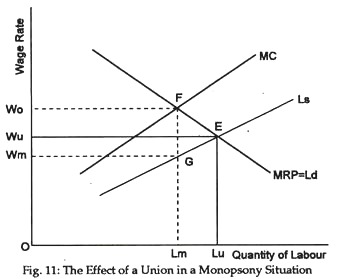 The monopsonist is forced to pay the same constant wage whether one or Lu workers (is/are) hired. As a result, it employs Lu workers, where the new Mc equals MRP. The union has increased both wages and employment.

The reason the union can do both is that the wage floor removes the monopsonists’ incentive to restrict hiring. No longer can the monopsonist reduce the wage by hiring fewer workers. The union counteracts monop­sony power. Consequently, the potential for economic efficiency is en­hanced. So long as the union does not raise the wage output Wo employment rises and efficiency improves.

The demand for labour service in a unionised industry is determined by factors outside the direct control of the union, such as the availability of substitute inputs and the demand for the product of the firm. However, if trade unions can impose greater discipline on workers, labour productivity will rise.

In such a situation employers will voluntarily accept the demand for higher wages. As Fig. 1 shows, successful union actions to increase the demand for- the services of union labours result in both higher wages and an expansion in employment, but at the expense of consumers (who have now to pay higher price for the product of the unionised industry). 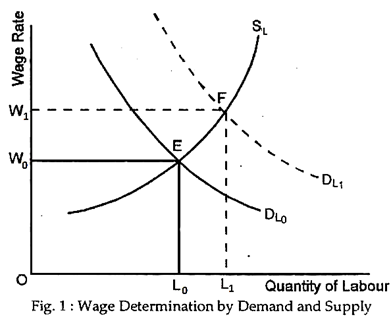 Significance of National Income Estimates | Economics
How would you Derive the Industry Demand Curve for Labour?