Let us make in-depth study of Hicks’ theory of trade cycle in an economy.

Hicks put forward a complete theory of business cycles based on the interaction between the multiplier and accelerator by choosing certain values of marginal propensity to consume (c) and capital- output ratio (v) which he thinks are representative of the real world situation.

According to Hicks, the values of marginal propensity to consume and capital-output ratio fall in either region C or D of Fig. 13.7.

As seen above, in case values of these parameters lie in the region C, they produce cyclical movements (i.e., oscillations) whose amplitude increases overtime and if they fall in region D1 they produce an explosive upward movement of income or output without oscillations. To explain business cycles of the real world which do not tend to explode, Hicks has incorporated in his analysis the role of buffers.

On the one hand, he introduces output ceiling when all the given resources are fully employed and prevent income and output to go beyond it, and, on the other hand, he visualizes a floor or the lower limit below which income and output cannot go because some autonomous investment is always taking place. 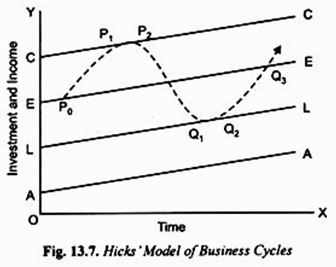 Another important features of Hicks’ theory is that business cycles in the economy occur in the background of economic growth (i.e., the rising trend of real income of output over time). In other words, cyclical fluctuations in real output of goods and services take place above and below this rising line of trend or growth of income and output. Thus in his theory he explains business cycles along with an equilibrium rate of growth.

With further assumptions of stable multiplier and accelerator, equilibrium income will grow at the same rate as autonomous investment. It follows therefore that the failure of actual output to increase along the equilibrium growth path, sometimes to move above it and sometimes to move below it, determines the business cycles.

Hicks’ theory of business cycles has been explained with the help of Fig. 13.7. In this figure, AA line represents autonomous investment. Autonomous investment is that investment which is not induced by changes in income and is made by entrepreneur as a result of technological progress or innovations or population growth. Hicks assumes that autonomous investment grows annually at a constant rate given by the slope of the line AA.

Given the marginal propensity to consume, the simple multiplier is determined. Then the magnitude of multiplier and autonomous investment together determine the equilibrium path of income shown by the line LL. Hicks calls this the floor line as this sets the lower limits below which income (output) cannot fall because of a given rate of growth of autonomous investment and the given size of the multiplier. But induced investment has not yet been taken into account.

If national income grows from one year to the next, as it would move along the line LL, there is some amount of induced investment via accelerator. The line EE shows the equilibrium growth path of national income determined by autonomous investment and the combined effect of the multiplier and accelerator. FF is the full employment ceiling. It is a line that shows the maximum national output at any period of time when all the available resources of the economy are fully employed.

Given the constant growth of autonomous investment, the magnitude of multiplier and the induced investment determined by the accelerator, the economy will be moving along the equilibrium growth path line EE. Thus starting from point E, the economy will be in equilibrium moving along the path EE determined by the combined effect of multiplier and accelerator and the growing level of the autonomous investment.

So under the combined effect of multiplier and accelerator, national income or output will rapidly expand along the path from P0 to P1. Movement from PQ to P1 represents the upswing or expansion phase of the business cycle. But this expansion must stop at P1 because this is the full employment output ceiling. The limited human and material resources of the economy do not permit a greater expansion of national income than shown by the ceiling line CC.

Therefore, when point P1 is reached the rapid growth of national income must come to an end. Prof. Hicks assumes that the full employment ceiling grows at the same rate as autonomous investment. Therefore, CC slopes gently unlike the very steep slope of the line from P0 to P1. When point P1 is reached the economy must grow at the same rate as the usual growth in autonomous investment.

For a short time the economy may crawl along the full employment ceiling CC. But because national income has ceased to increase at the rapid rate, the induced investment via accelerator falls off to the level consistent with the modest rate of growth determined by the constant rate of growth of autonomous investment. But the economy cannot crawl along its full employment ceiling for a long time.

Once the downswing starts, the accelerator works in the reverse direction. That is, since the change in income is now negative the inducement to invest must begin to decrease. Thus there is slackening off at point P2 and national income starts moving toward equilibrium growth path EE. This movement from P2 downward therefore represents the downswing or contraction phase of the business cycle.

In this downswing investment falls off rapidly and therefore multiplier works in the reverse direction. The fall in national income and output resulting from the sharp fall in induced investment will not stop on touching the level EE but will go further down. The economy must consequently move all the way down from point P2 to point Q1. But at point Q1 the floor has been reached.

Whereas the upswing was limited by the output ceiling set by the full employment of available resources, in the downswing the national income cannot fall below the level of output represented by the floor. This is because the floor level is determined by simple multiplier and autonomous investment growing at constant rate, while during the downswing after a point accelerator ceases to operate.

When during downswing such conditions arise, accelerator becomes inoperative. After hitting the floor the economy may for some time crawl along the floor through the path Q1 to Q2. In doing so, there is some growth in the level of national income. This rate of growth as before induces investment and both the multiplier and accelerator come into operation and the economy will move towards Q3 and the full employment ceiling CC. This is how the upswing of cyclical movement again starts.

But Hicks’ theory of trade cycles is not without critics. A major weakness of Hicks’ theory, according to Kaldor, is that it is based on the principle of acceleration in its rigid form. If the rigid form of acceleration principle is not valid, then the interaction of the multiplier and accelerator which is the crucial concept of the Hicksian theory of trade cycles is not valid.

Thus Duesenberry writes, “The basic concept of multiplier-accelerator interaction is important one but we cannot really accept to explain observed cycles by a mechanical application of that concept.” and, according to him, Hicks in his business cycle theory actually tries to do so.

It may be noted that Kaldor puts forward a theory of business cycles which does not make use of the rigid or strict form of the acceleration principle. In his trade cycle theory Kaldor provides for investment being directly related to the level of income and inversely related to the stock of capital.

Thus Kaldor’s approach which is also supported by Goodwin abandons the rigid and inflexible relation of investment to changes in income (output) as implied by the rigid acceleration principle [i.e., It = la + v (yt-1 – yt-2)] and instead has used the following form of the investment function

where It stands for investment in period t, Ia for autonomous investment, Yt-1 for income in the previous period, Kt for the stock of capital, and g and j are constants.

On the other hand, according to this new investment function, if capital stock increases, output or income remaining constant, investment will fall due to its being negatively related to capital stock.

Thus, Kaldor-Goodwin approach to investment while gives up the rigid acceleration principle but still retains the basic idea of investment related to income because in this approach investment will cause the capital stock to expand towards the stock of capital as desired for the production of output of the preceding year.

Thus Kaldor writes that “Hicks’ theory of trade cycles provides us many brilliant and original pieces of analysis”. Duesenberry considers it as an “ingenious piece of work’.