Notes on Aggregate Supply and its Component!

Aggregate supply is the money value of total output available in the economy for purchase during a given period. When expressed.

In physical terms, aggregate supply refers to the total production of goods and services in an economy. It is assumed that in short run, prices of goods do not change and elasticity of supply is infinite.

At the given price level, output can be increased till all resources are fully employed.

If we go deep, we will find that aggregate supply is represented by national income. How? We know that the money value of final output is distributed as rent, wages, interest and profit among factors of production which help to produce the output. From producers’ point of view, it is the cost of producing goods and services which they must recover from sale of output; otherwise, they will not produce the output. 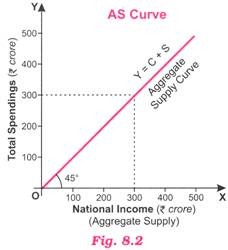 Put in the form of an equation:

AS curve is depicted in the Fig. 8.2 Aggregate supply or national income is shown on X-axis and total spending (Consumption + saving) on Y-axis. AS curve is artificially represented by a 45° line from the origin why? Because every point on this line is equidistant from X-axis and Y-axis taking same scale on both the axes, i.e., each point on this line indicates Expenditure (AD) = Income (AS).

Thus 45° line (also called a Guide line) helps us to identify equilibrium when two variables are to be shown graphically equal. That is why AS curve is represented by a 45° line so that when AD curve intersects it, AD becomes equal to AS. Thus, every point on 45° line represents AD = AS (i.e., equilibrium).

Again, 45° line implies that the sum of consumption and saving (C -I- S) is always equal to the level of income (Y). Another point to be kept in mind is that since technology is assumed to be constant during short period, output (or aggregate supply) can be increased only by employing more resources, mainly labour. Thus, aggregate supply increases in direct proportion to increase in employment.

According to Classical, aggregate supply is perfectly inelastic with respect to price level which means changes in price level have no effect on aggregate supply. It is due to J.B. Say’s law of market and wage price flexibility. As a result, Classical aggregate supply a curve is a vertical line parallel to Y-axis at full .s employment level of output as shown in the adjoining Fig. 8.3. 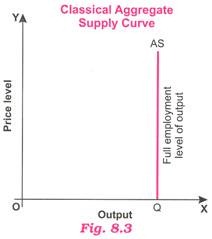 Beyond this point, further increase in production is not possible because all resources in the economy are already fully employed (used). As a result, aggregate supply curve AS, then, becomes perfectly inelastic at full employment level of output as shown in the adjoining Fig. 8.4. Aggregate demand determines the levels of output, income and employment as level of aggregate supply is constant and given in short-run. 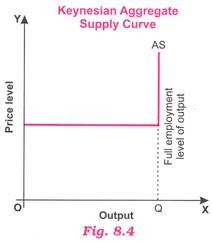 Excess Demand: Meaning, Inflationary Gap, Reasons and Impacts (with diagram)
Planned and Actual Saving and Investment and their Differences