Let us learn about the Long Run Industry Supply Curve.

An increasing cost industry is one where cost of the individual firms rises as the industry expands its output. Here prices of inputs rise. 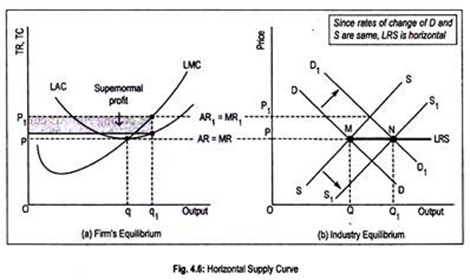 Let us assume that DD and SS are the initial demand and supply curves. These two curves together determine (point TVF) equilibrium price at OP. Accepting this price, a typical firm would produce Oq output. Incidentally, all the firms are making zero economic profit since P = LMC = LAC.

If we assume that there are 10,000 identical firms in the industry, then the industry output would be Oq × 10,000 firms = OQ (shown in panel b). Since these firms are making only normal profit at the price OP, the industry is in equilibrium with an output OQ.

Now, let us suppose that there is an increase in market demand to D1D1 following an increase in money income or a change in the taste of buyers. As a result, market price rises from OP to OP1 and the firm’s demand curve is now represented by P1 = AR1 = MR1 line.

The firm will now expand its output to OQ1. It will earn supernormal profit equal to the shaded area since P = LMC = MR1 = AR1> LAC. Existence of this profit implies that the industry is out of equilibrium. This will then act as an incentive for new firms to join the industry.

Two things will now happen. Firstly, demand for resources will go up. But, being a constant cost industry, input prices will remain unchanged. Thus, entry of firms will have no effect on cost curves. LAC and LMC curve will stay at the old level.

However, firms will continue to enter until excess profit disappears. Secondly, entry of new firms in the industry will shift the supply curve to S1S1. Industry equilibrium will now occur at point ‘N’ where the old price OP will be re-­established. At the price OP, OQ1 output will be supplied in the industry.

If we connect the various market equilibrium points—’M’ and ‘N’—we get the long run industry supply curve (LRS) drawn in panel (b). Thus, under constant cost industry, the LRS curve is a horizontal straight line or perfectly elastic even though the short run supply has a positive slope.

Sometimes, an expansion in industry output causes costs to rise in the long run. Thus as industry expands, external diseconomies outweigh external economies leading to a net increase in costs. As industry expands, demand for inputs rise and costs rise since the industry operates under increasing cost condition.

The industry is in equilibrium at the price OP and output OQ, as defined by the intersection of DD and SS curves at point ‘M’. Corresponding to this price OP, each firm produces Oq and is in long run equilibrium where P = AR = MR = LAC. Each firm is making only normal profit. Note that the industry output OQ = Oq × number of firms. 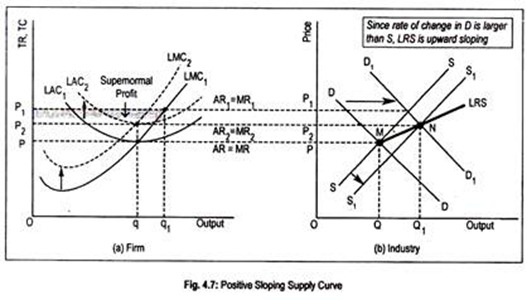 Suppose, demand curve now shifts to D1D1 following an increase in income of the buyers. The immediate impact of an increase in demand is the increase in price in the short run to OP j. This new price will be accepted by all the firms. This is represented by the demand curve P1 = AR1 = MR1. Each firm will now produce OQ1 and sell it at the price OP1. Firms will now be making economic profit or pure profit (shaded area in the figure).

Now two things happen. Firstly excess profit will now attract new firms to join the industry. As new firms enter the industry there will be an upward pressure in the demand for inputs. This will cause input prices and, hence, costs, to go up. Their interconnected reaction will pull up the LAC and LMC curves to LAC1 and LMC1 in the leftward direction.

Secondly, the increased number of firms and increasing costs cause short run market supply curve to shift to S1S1. New supply curve S1S1 intersects the demand curve at point ‘N’. The industry equilibrium price and quantity are op2 and OQ1, respectively. At this price, no firms are making excess profit. The typical firm at the price OP2 now produces Oq—the old level of output.

However, the output level that the firm now produces may be greater or less than the original one. Even then industry output is larger since more firms have joined the industry. Thus, industry output at the price OP2 is Oq × number of firms = OQ1. Now by joining points ‘M’ and ‘N’ we get a positive sloping LRS curve.

How is the upward rising industry supply curve derived under increasing cost condition has been alternatively demonstrated in Fig. 4.8. We know that, in the long run, firms enter the industry only when pure profit exists. Thus, pure profit is an incentive to join the industry. In Fig. 4.8(a) we have shown equilibrium of a firm before entry is made. Fig. 4.8(b) shows equilibrium of a newly entrant firm and Fig. 4.8(c) demonstrates long run industry equilibrium.

Let us assume that, initially, the competitive industry is in equilibrium at point ‘M’. The industry produces and sells OQ output at the price OP. As income increases, demand curve temporarily rises to D1D1 and short run equilibrium price rises to OP2.

Each firm now produces and sells OQ1 output at the price OP2 (panel a). Firms are now making abnormal profit (shaded area in figure). This attracts new firms to join. In an increasing cost industry, as firms enter, demand for input rises, price of input rises, cost rises. This leads to an upward shift in the LMC and LAC curves as shown in panel (b). Costs will rise till excess profit vanishes.

At the new price OP3, the firm earns normal profit after producing OQ3 output. Further, entry of new firms in the industry leads to a rightward shift in the supply curve to S1S1. Finally, equilibrium is achieved at point W. The industry output is now OQ3 and equilibrium price is OP3. Now by joining these equilibrium points (‘M’ and ‘N’), we get an upward rising long run industry supply curve, labelled as LRS.

It may happen that when a new industry is established in a locality it may enjoy a situation of decreasing cost. A decreasing cost industry is one when expansion in an industry output causes input prices to fall, and, as a result, costs decline.

Or in a decreasing cost industry, external economies outweigh external diseconomies. As a result, both new and old firms of the industry find their LAC and LMC curves to shift in the downward direction, indicating a decline in cost.

Fig. 4.9 explains this. As usual, panel (b) demonstrates industry equilibrium as defined by the intersection of the DD and SS curves. The industry is in equilibrium at point ‘M’. Corresponding to this equilibrium point, equilibrium output is OQ and equilibrium price is OP. 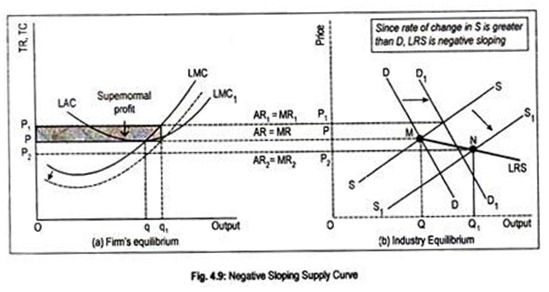 At this price, not only the competitive industry is in equilibrium but also all the firms within the industry are in equilibrium because P = AR = MR = LMC = LAC. The firm now produces and sells Oq output at the price OP and is enjoying only normal profit. Industry output is, thus, OQ = Oq × number of firms.

Suppose, demand curve shifts to D1D1 because of the increase in income of the buyers or increase in the price of substitute goods. The immediate reaction is the rise in price to OP1. At this ruling market price, each firm produces and sells Oq1 at the price OP1 and enjoys some supernormal profit. This encourages firms to join the industry.

Two things will now happen. Firstly, because of the entry, demand for inputs will rise. But since the industry operates under diminishing cost, input price will decline and costs will decline. This is shown by the downward shift of the LAC and LMC curves to LAC1 and LMC1 (here the dotted curves).

Secondly, entry leads to an increase in the number of firms within the industry. This causes market supply curve to shift to S1S1. Final equilibrium is achieved at point ‘N’. Reduction in costs and increase in supply lead to a reduction in price to OP2. At this price, the typical firm produces and sells Oq output and enjoys only normal profit.

There is now no incentive either to leave or join the industry. Though output of a firm stays at Oq, industry output is definitely larger because of the entry of new firms. Industry output as defined by the point ‘N’ of panel (b) is OQ = Oq × number of firms. By connecting these two equilibrium points— ‘M’ and ‘N’—we get a negative sloping industry supply curve, LRS.

As demand curve now shifts to D1D1, the short run market price rises to OP2. Each firm now produces and sells Oq2 at the price OP2 and gets abnormal profit. Abnormal profit (shaded area in figure) attracts more firms to join the industry. This causes input demand to rise first but input prices and, hence, costs, to fall since the industry is a decreasing cost one.

At this price, the firm produces and sells Oq3 but manages only normal profit, leaving no further scope for either entry or exit. Industry output is now larger at the price OP3. OQ3 (= Oq3 × number of firms) is the industry output. Now, by joining points ‘M’ and ‘N’, we get a supply curve which is negatively sloped, shown in panel (c).