Selling costs play the key role in monopolistic competition and oligopoly. Under these market forms, the firms have to compete to promote their sale by spending on advertisements and publicity.

Moreover, producer has not to decide about price and output and he also keeps in view how to maximize the profit.

In selling costs we include the salaries of sales persons, allowances to retailers to display the products etc. besides the advertisements. Advertisement expenditure includes costs incurred for advertising in newspapers and magazines, televisions, radio, cinema slides etc. It was Chamberlin who introduced the analysis of selling costs and distinguished it from the production costs. The production costs include all those expenses which are spent on the manufacturing of the commodity, its transportation cost of handling, storing and delivering of the commodity to actual customers because these add utilities to a commodity.

“Selling costs are costs incurred in order to alter the position or shape of the demand curve for the product.” E.H. Chamberlin

Basically, the concept of selling cost is based on the following two assumptions:

1. Buyers do not have any perfect knowledge about the different types of product.

2. Buyers demand and tastes can be changed.

There is a fundamental difference between selling costs and production costs. Production cost includes all the expenses incurred in making particular product and transporting it to the consumers. They include, outlays incurred on services engaged in the manufacturing of the product like land, labour and capital etc. On the other hand, selling costs include all the costs incurred to change the consumer’s preference from one product to another. These are generally intended to raise the demand of one product at any given price.

According to E.H. Chamberlin, “Production costs create utilities in order that demands may be satisfied while selling costs create and shift the demand curves themselves.” In short, we cannot make a clear cut distinction between the selling cost and production cost. In fact, both the costs are inter-related throughout the price system, so that at no point it can be said that one has ended and the other is to begin. 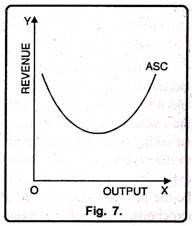 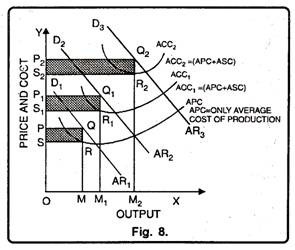 ACC2 is the average composite cost when more additional cost is incurred, as a result of which the demand for the product further increases. The new demand curve is AR3 which indicates a higher demand for the product. The profits are also greater than before since the shaded area P2Q2R2S2 > P1Q1R1S.

This would be the point at which the additional revenue due to advertising expenditure equals the extra expenditure on advertisement. It should, however, be noted clearly that the effects of advertisement on prices and output are uncertain. Advertisement by a firm may be considered successful if the elasticity of demand for its product falls.

In modern times, a lot of money is spent on selling costs. Of course, it becomes difficult to determine the most profitable output. At the same time, we also know that selling costs create a new demand curve. However, here equilibrium is determined when there are fixed selling costs as shown in Figure 9. 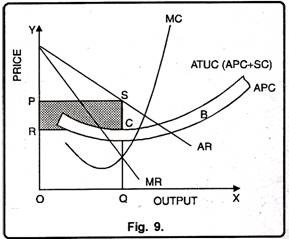 In Fig. 9, AR is the average revenue or demand curve. MR is the marginal revenue curve. The average production cost (APC), the shaded area B shows the selling cost. This shows that by adding selling cost in average production cost, we get average total cost. (ATUC = APC + SC) SC is the net return per unit while SQ is the price minus SC – the average total unit cost and OQ is the level of output. Thus shaded area PRCS is the maximum net return and OQSP is the total revenue minus total cost OQCR.

According to Chamberlin product differentiation is one of the most important feature of monopolistic competition. Product differentiation indicates that goods are close substitutes but are not homogeneous. They differ in colour, name, packing, size etc. For instance, you may get a variety of soaps in the market like Moti, Sandal, Lux, Hamam, Rexona, Lifebouy etc. All these are close substitutes but at the same time, they differ from each other.

The main peculiarities of product differentiation are as under:

1. Due to product differentiation, goods are not homogeneous.

2. Product differentiation aims at to control price and increase profits.

4. Product differentiation may be real or artificial.

The credit goes to Prof. Saraffa to introduce the concept of product differentiation under monopolistic competition on the basis of downward sloping demand curve. But Chamberlin introduced it on the basis of price and output determination.

Chamberlin opined that demand for product is influenced not by price only but also the style of the product and selling costs. It is so because aim of product differentiation is to inspire the consumer to demand a particular product. The producer is no longer entirely price taker; he becomes partially a price maker. As a result demand curve assumes negative slope. It indicates that when price falls demand will be more and vice-versa.

Product differentiation also affects the equilibrium of the firm under monopolistic competition. It has been shown in Fig. 9, supposing there are two types of products X and Y and no selling costs are incurred for the sale of these products. The producer has to decide about the quality of the product so as to maximize his profit. If the price of the product is already fixed, then the firm has to choose the product which has larger sales and will bring maximum profits. 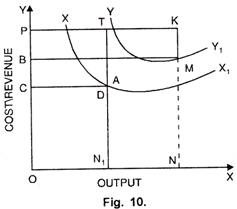