Let us learn about the Analysis of Selling Cost.

Gains from advertising by an individual firm have spill-over effects in the sense that the gains would be distributed across all the cases for monopolistic competition since different sellers produce slightly different products. It is the product differentiation that enables a monopolistically competitive seller to exercise some sort of monopoly power.

Under the circumstance, sales promotional activities are undertaken by the sellers to persuade more buyers to buy their products. Sales promotion, thus, involves selling cost which is to be distinguished from production cost. As far as monopolistic competition is concerned, total cost of producing a product is the sum of total production cost and total selling cost.

It was Chamberlin who first introduced the concept of selling cost. Through various sales promotion activities and advertising, a firm claims that its product is better than its rival’s product. Thus selling costs are those costs which are incurred by a firm to influence or persuade buyers to buy its product instead of others’ products.

According to Chamberlin, selling costs are defined as those costs which are incurred by monopolistically competitive firm ‘to alter the position or shape of the demand curve for a product’. The purpose of selling cost is, thus, to capture the saleable markets so as to increase total revenue and, ultimately, profit.

Since buyers have imperfect knowledge about the firm, price, quality of the product, existence of rival sellers, etc., and since there is the possibility of altering wants of buyers through advertisement and other sales promotional activities, sellers are tempted to incur selling costs. Thus, selling costs increase and shift the demand curve to the right.

Now we will consider the effect of advertising on price-output decision of monopolistically competitive seller. Our problem is to find the optimum output, price, and selling costs. In Fig. 5.17 we do this. Advertisement plays two roles:

It increases costs and it shifts the demand curve upwards. AR curve is the average revenue curve of the firm prior to incurring any selling expenses. 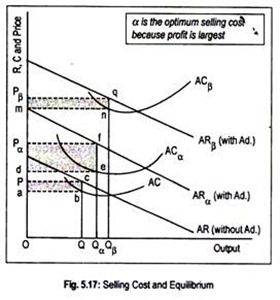 AC is the average production costs that do not take into account selling costs or advertising cost. For the neatness of the diagram, we have not used MR and MC curves. However, the profit-maximizing output that has been described here is determined by the intersection of MR and MC curves.

Our firm maximizes profit by producing OQ output where price OP is determined, since, at this output, MC and MR curves (not drawn) are equal to each other. Toted profit is represented by the shaded area (abcP) — the profits earned before any advertisement is made because AC curve lies below the AR curve.

Let us assume that our firm spends a amount of selling cost. This selling expense raises both the demand curve to ARα and average cost curve (inclusive of advertise­ment cost) to ACα. Consequently, equilibrium output becomes OQα and the optimum price thus determined becomes OPα. At this level of output—volume of profit has gone up (def Pα—the shaded area).

Since profits have increased following advertising expenditure, our firm will be tempted to spend more on advertisement (β amount). As a result, AR curve will shift to ARβ. AC curve will now shift to ACβ. Now the equilibrium output is OQβ and equilibrium price is OPβ. This time, our firm earns some profit but the volume of profit is comparatively less than when a amount was spent (mnqPβ < def Pα).

It is to be noted here that the firm does not get maximum profit by spending P amount of money. Therefore, it should choose to produce OQα amount and sell it at price OPα with the selling expenditure represented by ACα as an optimal advertising expenditure for the firm.

So we can conclude that it will be profitable on the part of the firm to increase additional selling cost so long as each increment of selling expenditure adds more to revenue than to its costs. Only when the additional revenue net of production costs generated equals the additional or marginal amount spent in order to generate such net revenue, profit will be the largest.

Sales promotion, thus, may not nece­ssarily cause profits to rise. There is an optimal level of selling cost. However, if advertising campaign does not cause demand curve to shift to the right, profits are then likely to decline. Particularly, when all firms in the monopolistically competitive market go for sales promotion excess profit will be eliminated eventually because of free entry and free exit.