Selling costs are the expenses on advertisement, salesmanship, free sampling, free service, door-to-door canvassing, and so on. There is no selling problem under perfect competition where the product is homogeneous.

This is because the firm can sell at the ruling market price any quantity of its product. Therefore, there is no need for advertising. If, however, all firms want to sell more, competition among them will lead to price reduction until the new equilibrium price is reached. Each can sell as much as it wants to sell at this price.

Under monopoly also, selling costs are not required as there are no competitors. But the monopolist may sometimes advertise his product to acquaint the people about the use and price of his product so that they may continue to buy his product.

Under monopolistic competition where the product is differentiated, selling costs are essential to push up the sales. They are incurred to persuade a buyer to purchase one product in preference to another. Chamberlin defines them “as costs incurred in order to alter the position or shape of the demand curve for a product.”

He regards advertisement of all types as synonymous with selling costs. But in the present-day business nomenclature, the term selling costs is wider than advertising and it includes besides advertising, expenses on salesmen, allowances to sellers for window displays, free service, free sampling, premium coupons and gifts, etc.

They are the outlays on the services of all factor-services, land, labour, capital and organisation, engaged in the manufacture of the product and also include packaging, transport and service charges. Selling costs are costs incurred to change consumers’ preferences for a particular product.

They are intended to raise the demand for one product rather than another at any given price.

Prof. Chamberlin distinguishes between the two in these words:

“The former (production) costs create utilities in order that demand may be satisfied, the latter create and shift the demand curves them.” To be precise, “those which alter the demand curve for a product are selling costs and those which do not, are production costs”.

However, no clear-cut distinction can be made between production costs and selling costs. Is the cost of a cellophane wrapper, for instance, a production cost or a selling cost? In fact, “the two types of costs are interlaced throughout the price system, so that at no point such as at the competition or manufacture, can one be said to end the other to begin.”

But Prof. Chamberlin himself finds a way out by confining selling costs to only advertising expenses.

The Curve of Selling Costs and Its Influence on Production Costs: 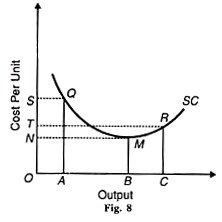 In fact per-unit selling cost and total selling costs increase beyond the minimum point M. According to Chamberlin, the shape of the curve and the exact point where it moves upward depends upon the nature of the product, its price, the nature of competing substitutes, the incomes of the buyers and their reluctance to change their tastes by the advertisement.

There is, however, a limit to the rising portion of the selling cost curve.

When the sales reach the saturation point, it ultimately becomes vertical. In the beginning, the application of successive doses of selling costs will raise the total sales more than proportionately so that average selling costs fall. This is due to two factors; firstly, consumers being attached to a particular brand of the product say, Brooke Bond Tea, are in the habit of buying it alone.

Advertisement in favour of another variety of the same product says Tata Tea, is meant to break their habit and dissolve the attachment of consumers to Brooke Bond Tea. One or two insertions a month in newspapers may make little impact on the consumers.

To convert the buyers to its brand, the manufacturer will have to incur larger selling outlays in the form of repetitive insertions of advertisement in newspapers, in commercial broadcasts, on the TV, in the form of samples, gifts or premium coupons.

Then only, sales will increase. Secondly, as larger outlays are incurred on sales promotion, internal economies of advertisement appear in the form of efficient salesmen, attractive advertisements and packing, etc. For instance, the larger the insertions and the size of advertisement, the lower the advertising rates per page. Thus, these two factors tend to lower average selling costs per unit of product up to a point.

Beyond this critical output M in our figure, average selling costs start rising again due to two forces. One, progressively increasing sales promotional expenses is to be incurred to induce regular consumers to continue to buy it.

Efforts to induce old customers to buy the same product require larger promotional expenses so that they are not only dissuaded from buying some other brand but also persuaded to buy more of the same product.

Two, larger selling outlays are required to attract new customers and those attached to other brands of the same product. They have to be convinced by repetitive advertisements in newspapers, through the radio, the cinema and television, of the superiority of this particular brand. Naturally such efforts require increased selling expenses.

As a consequence of these forces, average selling costs per unit of the product rise. We may conclude that two sets of forces operate in response to selling outlays on a product which tend to bring increasing returns up to a point, and beyond that, diminishing returns. 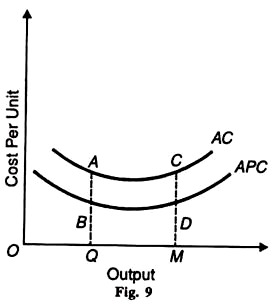 The average costs are proportional throughout. They remain the same at all levels of output. At OQ output they are BA and even at OM level of output, they are the same as before DC (=BA), so is the average total cost MC (=QA). It should be noted that the corresponding MC curves of A PC and AC will also move in the same proportion (not shown in the figure).

Selling costs are also of a fixed type, as in the case of screening a short-film in a cinema for a month or an insertion in the newspaper each Sunday. The average total cost per unit will at first be higher and as output increases it will fall and then, after a point, will start rising and the average total cost curve gradually becomes closer to the average production cost curve, as output increases further.

It implies that as sales increase, fixed selling costs are spread over a larger output and become less and less as shown in Figure 10, where APC represents the average production cost curve and AC the average total cost curve inclusive of selling costs.

The corresponding MC curves to APC and AC would be derived in the same manner and bear the same relation to their respective average cost curves. Added together they would give a combined MC curve (not shown in the figure). 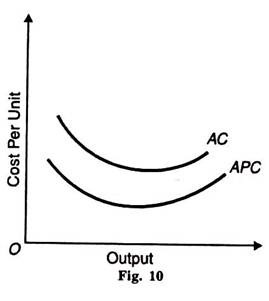 Influence of Selling Costs on the Demand Curve:

The question of a demand curve shifting to the left is altogether ruled out in this analysis. When the demand curve for the product of a firm shifts to the right, it is the result either of inducing the same customers to buy more of the same product or new customers buying this product attracted by the advertisement.

The firm will be losing few customers as a result of rise in the price of its product.

If, on the other hand, the old and the new customers are attracted more to the product, but, at the same time, are not prepared to pay a very high price, the new demand curve will be highly elastic in its lower portion.

Besides, the buying habits of the old and new customers also influence the shape of the demand curve. If they are influenced more by price changes rather than the product variation, the new demand curve will be highly elastic.

On the contrary, if they are not influenced much by price changes, the new demand curve will be less elastic than the old curve. In the analysis that follows straight-line demand curves are taken for the sake of simplicity.

When the new demand curve is drawn parallel to the old, the elasticity of demand on the higher curves is lower at each price. It means that the consumers are convinced of the superiority of this product and are willing to pay a higher price.

Under monopolistic competition, an individual firm has a variety of choices to sell a larger output. It may do so by lowering the price of the product; it may improve its quality; it may indulge in greater sales promotion efforts or it may resort to all the three methods simultaneously or combine the one with the other. We shall, however be concerned with only selling costs.

But even this problem is complicated because to depict each level of output at each price and the possible AR, MR, MC, and AC curves on a two-dimensional figure become complex. So for the sake of simplicity, the demand curve and the average total cost curve are taken along with the average production cost curve.

The following analysis discusses the influence of the selling costs on the price-output policy of the firm and the group.

This analysis assumes that when a firm incurs selling costs:

(1) Its demand curve shifts upward to the right;

(3) The firm maximises its net profits.

Since MC and MR curves are not shown in the diagram, the formula for calculating net profits is: Net Profits = (Price x Output)-(Production Costs + Selling Costs), i.e., the difference between the new demand curve and the average total cost curve multiplied by the number of units of the product sold at that price.

Suppose a firm spends Rs.1000 on advertising its product. Every time it spends this sum of money, the demand curve for its product shifts. In Figure 12, APC is the production cost curve and each time when Rs.1000 are spent on advertising, the average total cost curve becomes AC1 and AC2. D (AR) is the original demand curve before selling costs are incurred and D1 (AR1) and D2 (AR2) are the new demand curves.

The original equilibrium position is when OA output is sold at OP price. The firm earns TSRP super-normal profits.

Now, when selling costs are incurred in the first instance, the new equilibrium position brings T1S1R1P1 profits by selling OB output at OP1 price. Further expenditure of Rs.1000 on advertising increases profits to T2 S2 R2 P2, when ОС quantities of the product are sold at OP2 price.

The firm will, however, continue to spend Rs. 1000 on advertising its product each time so long as it adds more to total revenue than to total costs, till profits are maximised.

If the firm spends more on advertisement beyond this level, the addition to revenue will be less than costs. The firm will lose rather than gain by increasing selling costs. In Figure 12 the firm reaches the position of maximum profits when ОС product is sold at OP2 price and the firm earns T2S2R2P2 super-normal profits. Any further expenditure on advertisement will lead to diminution of profits.