The first condition for Pareto optimality relates to efficiency in exchange. The required condition is that “the marginal rate of substitution between any two products must be the same for every individual who consumes both.”

It means that the marginal rate of substitution (MRS) between two consumer goods must be equal to the ratio of their prices. Since under perfect competition every consumer aims at maximising his utility, he will equate his MRS for two goods, X and Y to their price ratio (Px/Py).

The box diagram Figure 1 explains the optimum condition of exchange. Take two individuals A and В who possess two goods X and Y in fixed quantities respectively. Oa is the origin for consumer A and Ob the origin for В (turn the diagram upside down for its understanding).

The vertical sides of the two axes, Oa and Ob, represent good Y and the horizontal sides, good X. The indifference map of A is represented by A the curves A1 A2 and A3 and B’s map by B1 B2and B3 indifference curves.

Any point within this box represents a possible distribution of the two goods between the two individuals. Take point E where the two indifference curves A 1 and B1 intersect. At this position, A possesses OaYa units of Y and OaXa of good X. В receives ObYb of Y and Ob Xb of X. 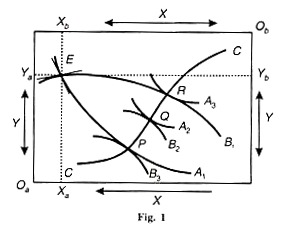 At point E the marginal rate of substitution between the two goods is not equal to the ratio of their prices because the two curves do not have the same slope. So E is not the point of у optimum exchange of the two goods X and Y between the two individuals A and B. Let us try to find out such a point where one individual becomes better off without making the other worse off.

Suppose A would like to have more of X and В more of Y. Each will be better off without making the other worse off if he moves to a higher indifference curve. Let them move from point E to R. At R, A gets more of Х by sacrific­ing some Y, while В gets more of Y by sacrificing some amount of X.

It is only when they move from E to Q that both are on higher indifference curves. P, Q and R are, thus, the three conceivable points of exchange, The contract curve CC is the locus of these points of tangency which shows the various positions of exchange that equalize the marginal rates of substitution of X and Y.

The second condition for Pareto optimality relates to efficiency in production. There are three allocation rules for demonstrating efficiency in production under perfect competition. Rule one relates to the optimum allocation of factors. It requires that the marginal rate of technical substitution (MRTS) between any two factors must be the same for any two firms using these factors to produce the same product.

Suppose there are two firms A and В that use two factors: labour (L) and capital (K) and produce one product. Given the prices of the two factors, a firm is in equilibrium under perfect competition when the slope of an isoquant equals the slope of the iso-cost line.

A firm under perfect competition will employ a factor of production up to the point at which its marginal value product (VMP) equals it price. If MPP is the marginal physical product of factor L (labour) in the production of good X in firm A, then its VMP is the marginal physical productivity multiplied by the price of X, that is VMP = A MPPXL;. PX Thus the price of labour (PL) in firm A is

Similarly, in firm В the price of labour is

Since the price of the product (Px) and the price of labour (P,) are the same in both the firms, each firm will equate its marginal physical productivity to PL/ PX Thus from equations (1) and (2), we have

Thus in equilibrium each firm has the same marginal physical productivity of factor L in producing the same product X. Rule three for efficiency in production requires that the marginal rate of transformation (MRT) between any two products must be the same for any two firms that produce both. This condition requires that if there are two firms A and B, and both produce two products X and Y, then AMRTXY = BMRTXY

A profit maximising firm under perfect competition will be in equilibrium when the iso-revenue line is tangent to its transformation curve. It means that for equilibrium the marginal rate of transformation between two products X and Y must equal their price ratio, i.e., MRTXY= PX/Py . Thus the optimum condition in the case of firm A will be BMRTXY, = PX/Py. And in the case of the firm В it will be BMRTXY= PXPY Thus, AMRTXY, = BMRTXY = PXPY.

This rule is explained in terms of Figure 2. The MRT between any two products is the rate at which one product would have to be sacrificed in order to produce more of the other product with the same quantity of resources. It is measured on the diagram by the slope of the transfor­mation curve PP1 at any point. TR is the iso-revenue line whose slope 1 shows PXPY. At point E the slopes of the transformation curve PP1 and the iso revenue line TR are equal so that MRTXY, = PXPY Thus each firm maximises its output by producing and selling OX1 of commodity X and OY1 of commodity Y.

Since the price ratios of the two products to consumers and firms are the same under perfect competition, the MRS of all individuals will be identical with MRT of all firms consequently, the two products will be produced and exchanged efficiently. Symbolically, MRSXY = PX/PY, and MRTxy = Px/Py. Therefore, MRSXY = MRTxy. 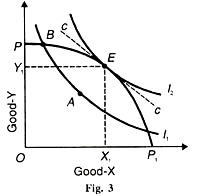 Figure 3 illustrates overall Pareto optimality in consumption and production. PP; is the transformation curve or the production possibility frontier for two goods X and Y. Any point on the PP curve shows the marginal rate of transformation (MRT) between X and Y which reflects the relative opportunity costs of producing X and Y, that is MCx/MCy . Curves I1 and I2 are the indifference curves which represent consumer tastes for these two goods.

The slope of an indifference curve at any point shows the marginal rate of substitution (MRS) between X and Y. Pareto optimality is achieved at point E where the slopes of the transformation curve PPt and the indifference curve 12 are equal. This equality in slopes is shown by the price line cc which indicates that at point £ the MRSxy = MRTxy = Px/Py or MUx/MUy_=MCx/MCr = Px/Py.

Given the production possibility frontier PP1, there is no other indifference curve which satisfies Parteo efficiency. Point A is of inefficient production because it is below the PPI curve. Point B is on the production possibility frontier but it is on a lower indifference curve I1, where the consumer satisfaction is not maximised. Therefore, Pareto optimality exists only at point E, where there is efficiency in both consumption and production when the society consumes and produces OX1 of good X and OY1 of good Y.

These Pareto optimality conditions will be achieved if:

(1) second-order conditions are satisfied for each consumer and producer,

(2) No consumer is satiated,

(3) There are no external effects either in consumption or production,

(4) There are no indivisibilities, and

(5) There are no imperfections in factor and product markets.