In this article we will discuss about the concept of liquidity trap, explained with the help of a suitable diagram.

In such a situation, described by Keynes as liquidity trap, individuals believe that bond prices are too high and will therefore fall, and correspondingly that interest rates are too low and must rise They, therefore, believe that to buy bonds would be to incur a capital loss and as a result they hold only money. This means that an increase in the money supply merely increases idle balances and leaves the interest rate unaffected.

Keynes pointed out that during depression when the rate of interest is very low, the demand curve for money (or the liquidity preference curve) becomes completely elastic (horizontal). The rate of interest has fallen enough. It cannot fall further.

The implication here is that any attempt to achieve the internal expansion through increased investment brought about by lowering the interest rates would fall, because any increase in the money supply created in order to reduce the rate of interest would be held in the form of cash balances, making it impossible to use interest rates (monetary policy) to expand the economy. See Fig. 7 which describes such a situation. 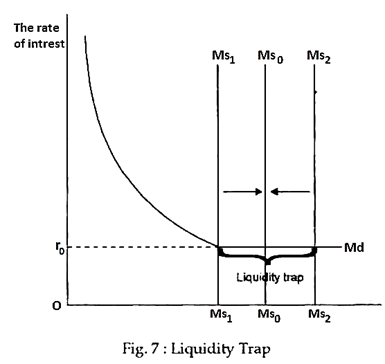 Keynes’ theory assumes that each individual has his own view about the long-run equilibrium interest rate and that there corresponds to this a critical rate below which are individual holds only money and above which he holds only bonds. Clearly, if everyone is holding money as each one is in the liquidity trap then the current interest rate must be below the lowest critical rate situation.

However, in practice, there is no statistical evidence to support the existence of a liquidity trap. Furthermore, while the hypothesis rests on the view that expectations are regressive it offers no theory of precisely how these are formed.

Significance of National Income Estimates | Economics
How would you Derive the Industry Demand Curve for Labour?