In this article we will discuss about the Lewis model of economic development.

A number of economists attempted to analyse development in the context of a ‘labour-surplus economy’. These theories owe their origin to the celebrated work of Nobel Laureate Sir W. Arthur Lewis in 1954. An elaborate discussion of the labour-surplus economy is given by G. Ranis and John Fei in 1961.

In 1954 Sir Arthur Lewis published a paper, ‘Economic Development with unlimited supplies of labour’ (The Manchester School), which has since become one of the most frequently cited publications by any modern economist: its focus was a ‘dual economics’ —small, urban, industrialised sectors of economic activity surrounded by a large, rural, traditional sector, like minute is largely in a vast ocean.

A central theme of that article was that, labour in dual economies is available to the urban, industrialised sector at a constant wage determined by minimum levels of existence in traditional family farming because of ‘disguised unemployment in agriculture, there is practically unlimited sup­ply of labour and available of industrialisation, at least in the early stages of development. At some later point in the history of dual economics, the supply of labour is exhausted then only a rising wage rate will draw more labour out of agriculture.

With their acute material poverty, it is difficult at first sight to imagine how the overpopulated countries can increase their savings without great hardships. On the contrary, their surplus population on the land seems to offer a major unused potential for growth, waiting only for the ‘missing component’ of outside capital to assist them in the process.

Moreover, their rapid rates of population growth lend themselves to calculations of aggregate capital requirements which must be made available if their per capita incomes are to be maintained or raised.

Says Myint, “All in all, the drama of the poor countries struggling at the minimum subsistence level and the need for a massive dose of outside capital to break the interlocking vicious circles which hold them down to that level does not attain its full tragic grandeur unless viewed against the background of overpopulation.”

An LDC is conceived to operate in two sectors:

(1) A traditional agricul­tural sector, and

(2) A much smaller and also more modern industrial sector.

“Surplus labour” (or disguised unemployment) means the existence of such a huge population in the agricultural sector that the marginal product of labour is zero. So, if a few workers are removed from land, the total product remains unchanged.

In Lewis model the transformation process or the process of structural change starts by an autonomous expansion in demand in industry as a result of changes in domestic consumer tastes, in government purchases, or in international markets.

The central point is that labour (here considered homogeneous and unskilled) shifts from agriculture into industry. The supply of labour from agriculture to industry is “unlimited” (i.e., completely elastic) at the given urban wage (about 30 to 50% higher than the rural wage), owing to the relative sire of the agricultural labour forces at the margin.

The phenomenon is frequently labelled “disguised unemployment in agriculture”. Redundant supplies of unskilled labour to industry at existing wages hold down industrial labour costs. But higher demand and higher prices in industry result in higher profits.

When these profits are ploughed back into industrial capital formation, demand for industrial output (both for consumption goods by newly employed workers and investment by capitalists) rises, causing further shifts of labour out of agriculture into industry.

The process comes to a halt when agricultural productivity rises to a point where the supply price of labour to industry increases, i.e., a point at which agricultural alternatives of output and income are sufficiently attrac­tive to the would-be industrial workers to keep them in farming. In the absence of rural-urban differences in the cost of living, this occurs when the marginal product of labour in the two sectors are equal.

Lewis postulates the existence of a subsistence sector with surplus labour and he sees in this the seed for the subsistence sector. One major charac­teristic of the capitalist sector is that it uses reproducible capital and that it produces profit.

So capi­talists can obtain even increasing supplies of such labour at the existing wage rate, i.e., they will not have to raise wages to attract more labour. So, the capitalist sector can expand indefinitely at a constant wage rate for the unskilled labour.

The actual (market) wage rate will be determined by earnings in the subsistence sector. But ‘earnings’ here means the average product and not the marginal one, in subsistence sector receives an equal share of what is produced.

Lewis has assumed and made the point that capitalists will have to pay a margin of about 30% above average subsis­tence pay, because the surplus workers need some incentive to move and in any case part of the difference is needed to compensate them for the higher cost of living in urban areas.

This surplus is the key to the Lewis model of development. In Fig. 14 OS is the average product of the subsistence sector—the amount a man would receive there. Here, OW is the capitalist wage.

We start with a fixed quantity of capital, and in this situation the demand for labour is represented by the marginal productivity schedule of labour NQ. Under profit-maximising conditions, labour will be applied to the point where the wage, W, equals marginal productivity, i.e., Q1, corre­sponding to Oa number of workers. Workers in excess of Oa will earn whatever they can in the subsistence sector.

Development takes place since part of what is produced accrues to the capitalist in the form of a surplus (WN, Q1 in Fig.14). This amount is rein­vested. This reinvestment produces an increase in the amount of fixed capital and causes a shift in the marginal product of labour curve form N1Q1 to N2Q2 in the next period. 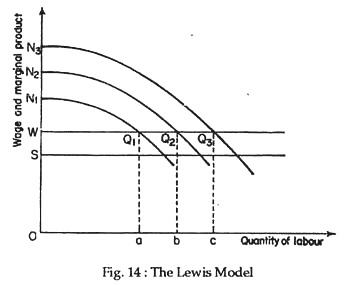 More labour will now be employed and the surplus increases, leading to a further shift of the curve to N3Q3, causing more labour to be drawn in from the sub­sistence sector has been drawn into the capitalist sec­tor. When that happens pay in the subsistence sector will start to rise, causing wages in the capitalist sector to rise, and then the first phase of development will have ceased as the supply curve of labour has ceased to be hori­zontal, but has turned up­ wards.

The Lewis model is close to the Ricardian one. It neglects the central concern of Ricardo: how the price of food is to be held down. If it he assumed, however, that the supply of labour to industry is infinitely elastic at a steady wage because of surplus labour in agriculture, this can help explain initial development which comes to an end when wages start to rise with increased capital formation.

The differences between the capitalist and non-capitalist sectors are elimi­nated by their shared labor shortage. Lewis’ main point is that eventual wider-spread economic growth and development can be fuelled by initial large supplies of cheap labour that result from the initial condition of economic duality.

The Lewis model was interpreted throughout the third world as justify­ing an import completing, industrialisation growth strategy and must there­fore be given some of the blame, through no fault of the author, for the neglect of rural development in the companies of Africa, Asia and Latin America which has been singled out as the great scandal of development in the 1970s. D. W. Jorgenson has provided a neo-classical explanation of the development of ‘dualism’ in LDCs, rejecting Lewis’ influential theory of ‘economic development with unlimited supplies of labour’.

It is to be noted that although the Lewis model of development is both simple and roughly in conformity with the historical experience of economic growth in the West, it has three key assumptions which are sharply in contrast with the realities of underdevelopment in most Third World coun­tries.

Second, the model assumes that ‘surplus’ labour exists in rural areas while there is full employment in the urban areas. In reality, exactly the reverse is true in LDCs: there is substantial open unemployment in urban areas but almost no general surplus labour in rural locations.

The third key assumption at variance with reality is the notion of the continued existence of constant real urban wages until the supply of small surplus labour is exhausted. Says M.P. Todaro, “One of the most striking features of the urban wage situation in almost all developing countries, however, has been the tendency for these wages to rise substantially, both in absolute terms and relative to average rural incomes, even in the presence of rising levels of open unemployment.”

The labour-saving bias of modern technological transfer supported by the widespread non-existence of rural surplus labour, the prevalence of ‘urban surplus’ labour, and the tendency for urban open unemployment exists, suggest that the Lewis model offers little analytical and policy guidance for solving employment problems in labour-surplus LDCs.

“Nevertheless”, concludes M. P. Todaro, “the model has some analytical value in that it emphasises two major elements of the employment problem: the structural and economic differences between the rural and the urban sectors, and the central importance of the process of labour transfer between them.”

What is Economic Planning?
How to Calculate Terms of Trade? | Economics