The following article will guide you about how to find income elasticity of demand from Engel curves.

Ernst Engel developed, on the basis of actual data, a law of con­sumption. Engel’s law states that, the percentage of expenditure on food is high when family income is low and vice-versa.

This is shown in following Table 1:

It follows from the above table that, if absolute size of income increases the percentage of income spent on food declines. In the above table it appears that the rich family B is spending more than the other family A on food. But the percentage share of food-expenses to gross income is low in family B compared to family A which is relatively poor. Thus, demand for food is income-inelastic.

At a macro-level, Engel’s law serves an important purpose. The propor­tion of national income spent on food is a good indicator of a country’s growth and welfare, indeed. The larger the proportion, the lower is welfare and vice versa.

Engel’s curve is a line that shows the relationship between income of an individual and his consumption of food.

We measure income on the horizontal axis and consumption of food on the vertical axis. The slope of the curve at any point denotes the ratio of change in consumption to change Quantity in income, i.e., individuals pro­pensity to consume. The slope of the line OB shows the average propensity to consume, that is, the ratio of total consumption of the good to total income. The ra­tio of MFC to the APC the good is income elasticity of demand. It may be proved in this way. MPC is ∆C/∆Y and APC is C/Y then 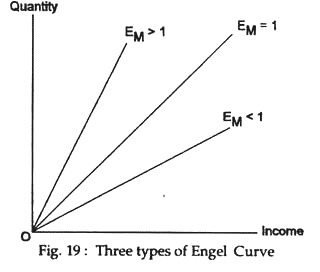 This is the income elasticity of demand for the good.

Cooperative Form of Business
Determinants of Consumption (With Diagram) | Goods