The oldest and most significant theory of factor pricing is the marginal productivity theory. It is also known as Micro Theory of Factor Pricing.

It was propounded by the German economist T.H. Von Thunen. But later on many economists like Karl Mcnger, Walras, Wickstcad, Edgeworth and Clark etc. contributed for the development of this theory.

According to this theory, remuneration of cache factor of production tends to be equal to its marginal productivity.

“The distribution of income of society is controlled by a natural law, if it worked without friction, would give to every agent of production the amount of wealth which that agent creates.” -J.B. Clark

The main assumptions of the theory are as under:

The marginal productivity theory rests upon the fundamental assumption of perfect competition. This is because it cannot take into account unequal bargaining power between the buyers and the sellers.

The theory assumes that every producer desires to reap maximum profits. This is because the organizer is a rational person and he so combines the different factors of production in such a way that marginal productivity from a unit of money is the same in the case of every factor of production.

The theory assumes that both labour and capital are perfectly mobile between industries and localities. In the absence of this assumption the factor rewards could never tend to be equal as between different regions or employments.

It implies that all units of a factor are equally efficient and interchangeable. This is because different units of a factor of production are homogeneous, since they are of the same efficiency, they can be employed inter-changeable, and e.g., whether we employ the fourth man or the fifth man, his productivity shall be the same.

The theory takes for granted that various factors of production are perfectly adaptable as between different occupations.

Both producers and owners of factors of production have means of knowing the value of factor’s marginal product.

It is assumed that various factors of production are fully employed with the exception of those who seek a wage above the value of their marginal product.

The law of variable proportions is applicable in the economy.

11. The Amount of Factors of Production should be Capable of being Varied:

It is assumed that the quantity of factors of production can be varied i.e. their units can either be increased or decreased. Then the remuneration of a factor becomes equal to its marginal productivity.

12. The Law of Diminishing Marginal Returns:

It means that as units of a factor of production are increased the marginal productivity goes on diminishing.

Marginal productivity theory of distribution seeks to explain determination of a factor’s remuneration only in the long period.

Explanation of the Theory:

Analysis of Marginal Productivity Theory from the Point of View of an Industry:

At OP wages, the demand for labour will increase to ON. DD1 is the firm’s demand curve for labour. The summation of demand of all the firms shows demand curve of an industry. Since the number of firms is not constant under perfectly competitive market, it is not possible to estimate the summation of demand curves of all firms. However, one thing is certain that is the demand curve of industry also slopes downward from left to right. The point where demand for and supply of a factor are equal will determine the factor price for the industry. This theory assumes the supply of a factor to be fixed. 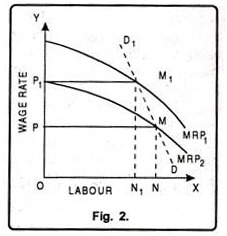 Thus factor price is determined by the demand for factor i.e. factor price will be equal to the marginal revenue productivity. It has been shown by Fig. 3. In the Fig. 3, number of labour has been taken on OX axis whereas wages and MRP have been taken on OY axis. DD1 is the industry’s demand curve for labour. This is also the Marginal Revenue Productivity curve.

Thus under perfect competition, factor price is determined by the industry and firm demands units of a factor at this price.

Analysis of Marginal Productivity Theory from the Point of View of Firm:

Under perfect competition, number of firms is very large. No single firm can influence the market price of a factor of production. Every firm acts as a price taker and not a price maker. Therefore, it has to accept the prevailing price. No employer would like to pay more than what others are paying. In other words, a firm will employ that number of a factor at which its price is equal to the value of marginal productivity. Therefore, from the point of view of a firm, the theory indicates how many units of a factor it should demand. 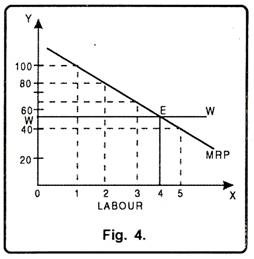 In Fig. 4 number of labourers has been measured on OX-axis and wage rate on Y-axis. MRP is marginal revenue productivity curve and WW is the wage rate prevailing in the market. Since, under perfect competition wage rate will remain constant that is why WW wage line is parallel to OX-axis.

MRP curve is sloping down-ward. It cuts WW at point E which is the equilibrium wage rate of Rs. 55. At point E, firm will demand only four labourers. Thus, from the above, we can conclude that a factor is demanded up to the limit where its marginal productivity is equal to prevailing price. 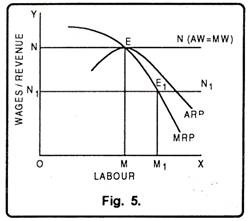 It indicates that there is only one buyer of the factors. Therefore, monopsony refers to a situation of market where only a single firm provides employment to the factors. If the firm demands more factors, factor price will go up and vice-versa. However, the determination of factor price under monopsony can be explained with the help of Fig. 6. 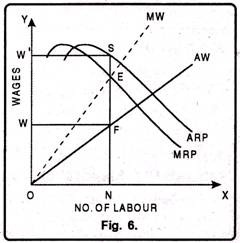 In the fig. 6 a monopsony will employ that number of labourers at which their marginal wage is equal to MRP. In the fig. 6 firm is in equilibrium at point E. Here, firm will employ ON labourers and they will be paid wages equal to NF. In this way, ON labourers will get less wages than their MRP i.e. EN. Monopsony firm will have EF profit per labourer which arises due to exploitation of labourers. Total profit SFWW’ is due to exploitation of labour.