The following points highlight the top six theories of interest. The theories are: 1. The Marginal Productivity Theory 2. The Demand-Supply Theory 3. The Abstinence or Waiting Theory 4. The ‘Agio’ or the ‘Time Preference’ Theory 5. The Loanable Funds Theory 6. The Liquidity-Preference Theory.

In today’s complex production system, the role of capital is highly important as a producer can produce a much larger volume than what can without capital. Accordingly, the higher productivity of capital makes the interest rate higher and the lower productivity keeps it at a low level. So, a producer would employ capital up to that amount at which the rate of interest becomes equal to the value of the marginal product of capital.

Capital is demanded because it is productive; it makes possible a much greater future output. Firms invest (i.e., create capital) because they expect to earn profits. They anticipate that the newly created capital will yield a series of returns during its lifetime which will exceed the costs incurred in its purchase and maintenance.

The firm undertaking investment will esti­mate the net additional profits to be derived from the increased output and these expected net annual receipts can then be expressed in the form of a percentage annual return on the initial outlay. This percentage yield is the productivity of capital.

If we assume that the stock of capital is being increased relative to the stocks of the other factors of production, the returns to capital will be diminishing. Capital, like the other factors of production, is subject to the Law of Diminishing Marginal Productivity. The marginal product curve, then, will slope downwards from left to right. The analysis of the demand for capital follows exactly the same lines as that followed to determine the demand for labour.

In Fig. 1 the DD line represents the marginal productivity of capital. It shows us the expected net profitability of additions to the firm’s stock of capital. The price of capital is taken to be the current rate of interest on the funds available to purchase capital equipment, and we assume that the indi­vidual firm cannot influence this market rate of interest.

In Fig. 1, therefore, the price of capital appears as a horizontal line r0A. The entrepreneur will employ capital up to the point where the value of its marginal product is just equal to its price. In Fig. 1, when the rate of interest is Or0, the firm will expand its capital stock to OK0. 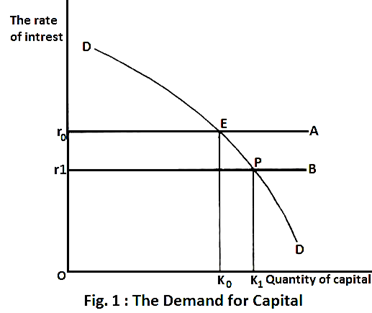 Any further additions to the capital stock would only reduce the firm’s profits because the cost incurred in acquiring the capital (i.e., the interest charges) would exceed’ the expected annual returns from the extra units of capital. If the rate of interest falls to Or2, the demand for capital increases to OK1.

The marginal productivity curve tells us what quantity of capital will be demanded at any given price and it is, therefore, the demand curve for capital. The equilibrium condition for the firm is the familiar one. It will employ additional units of capital up to the point where the last unit employed adds as much to revenue as it does to costs. More formally we say that profitability is maximised when,

The MP of Capital = The Rate of Interest

The marginal productivity of capital, like that of labour, has two com­ponents:

(i) The physical productivity of the capital, and

(ii) The price of the goods produced with that capital. Changes in either of these components will shift the MP curve which is, of course, the demand curve for capital.

According to this theory, the demand for and the supply of capital jointly determine the rate of interest. While the demand for capital is governed by its marginal productivity its supply depends on saving. The rate of interest reaches equilibrium at the point where the demand for capital becomes equal to its supply. But the theory is criticised as it assumes the existence of full employment as it fails to take into account the effect of changes in investment upon the level of income and savings.

3. The Abstinence or Waiting Theory:

The abstinence is, however, unpleasant. So, interest must be paid to induce the people for making the sacrifice of present consumption. Mar­shall substituted ‘waiting’ for ‘abstinence’ because the idea of pain or suffering is associated with abstinent. But the abstinence theory is criticised on the ground that abstinence does not always involve sufferings. More­over, interest cannot be regarded as the price paid for waiting because many people accept ‘waiting’ without any interest.

According to the Austrian economist Bohm-Bawerk, interest is the agio or premium which the present consumption has over future consumption of the same amount.

A question at this point is why interest arises at all?

(a) Present wants are felt more keenly than future wants. If now everyone expects a continuously rising income stream, then the law of diminishing marginal utility implies positive time preference which is indicated by the positive rate of interest.

(b) The second independent reason for positive time preference is persistent underestimation of future which Bohm Bawerk attributed to:

(iii) The shortness and uncertainty of life.

(c) The third reason for the emergence of interest is technical superiority of present over future goods. Because of the greater productivity of capital people prefer to have present goods which can be used as capital, so that they have more goods in future. They are, therefore, prepared to pay a premium on present goods, as against future goods. These are the essence of the time preference theory of interest.

Later on, Fisher developed the time preference theory on the basis of the agio theory. According to him, interest functions as a price in exchange between present and future goods. As people have a preference for present over future consumption, interest has to be paid to win over the individual’s impatience i.e., his desire to spend his income for present consumption in preference to future enjoyment. But this theory is one-sided as it has explains only the supply side of capital.

The neo-classical writers hold the view that the rate of interest is the price for use of loan capital and is determined by the demand for and the supply of loanable funds.

According to J. M. Keynes, the rate of interest is determined by the demand for and the supply of money Interest is the reward for parting with liquidity for a specified period of time.