Term Paper on the World Bank

Term Paper # 1. Formation and Objectives of the World Bank:

International Development Association [IDA] is an associate Organisation of IBRD. IBRD and IDA together constitute the World Bank. After including Multilateral Investment Guarantee Agency [MIGA] and International Finance Corporation [IFC] with it, it is called World Bank Group.

In Common terms, [IBRD] is referred to as the World Bank. It was founded on 27th December, 1945 as a Supplementary Organisation of IMF and it started its operation on 25th June, 1946.

According to the article 1 of the IBRD agreement, the main objectives of the World Bank are as follows:

The most prominent objective of the World Bank is to give economic help in the reconstruction and development of those countries which had got their economy very badly damaged during war. More ever, the World Bank encourages the underworld countries by giving them economic assistance. The World Bank promotes the long term investment for such assistance.

Generally foreign investment plays crucial roles in the economic development of underdeveloped and developing countries. But the foreign private investors don’t show interest in the capital investment in these countries because they don’t feel sufficient security. The World Bank gives those investors the guarantee of safety of their capital. The World Bank also gives financial assistance to these investors in the hours of need. Consequently this provides an encouragement for foreign investment.

It is also an objective of the World Bank that it should create a suitable atmosphere among the member nations so that wartime economy should be adopted as the peace time economy.

The World Bank supplies capital for the development of productive resources. It also makes the capitalists invest for this purpose. It also advises its member countries for the proper use of capital. Thus the objective of the World Bank is to do all those works and help in those activities which lead to economic and social development of the member nations.

The main functions of World Bank are as follows:

The main function of World Bank is to provide loans to member countries particularly to the underdeveloped countries for reconstruction and development. This loan is generally granted for completing the long-term projects. The period of loans is generally from 5 to 20 years.

The main points of loan activities of the World Bank are as follows:

(i) The Bank can grant up to 20 percent of its paid up capital as loan to member countries from its funds.

(iii) It grants loans from its own funds.

(iv) The Bank grants loans to member countries even after taking loans from the money market.

(i) From the given table it is clear that the World Bank takes application from those member countries which want to take loans.

(iii) The World Bank generally provides loan for specific projects only. Thus, before granting loan the specialist of the World Bank go to that specific country and inspect the concerning project.

(iv) After being satisfied with the project, the World Bank informs the loan taking country about the terms of credit which include the interest rate, repayment plan etc. The country taking loan has to repay the loan in gold or in that very currency in which the loan is taken.

(v) After Undergoing through these stages, the loan is accepted for sanction.

(vi) After granting loan, the World Bank also keeps an eye on its use and even gives proper guidelines if needed. 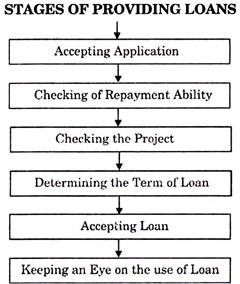 The World Bank makes arrangement to get the member countries provided with loans by banks and other financial institutions and takes guarantee of the timely repayment of such loans. For such Guarantee, the word Bank takes 1 to 2 percent service tax from the member country.

The World Bank makes arrangement for the economic survey of member countries and studies the economy of these countries and gives economic, scientific and technical advice accordingly.

There is a need of trained officials and staff for the successful implementations of the projects sponsored by the World Bank. The World Bank makes arrangements for the official training for the member countries. The Economic Development Institute and a Staff College have been set up at Washington for this purpose.

For Being an International and Unbiased Institution the World Bank performs the task of mediating in the disputes among the member countries and settling these disputes. For example, the credit to settle Indo-Pak Canal Water Dispute, The Suez Canal Dispute etc., goes to the World Bank.

The payment of share money by its member countries is done as follows:

(i) 2 percent of the total amount has to be paid in gold, American Dollar or SDR.

(ii) 18 percent of the total amount can be paid in the currency of the member country.

(iii) The remaining 80 percent can be demanded by the World Bank at its will and the member countries are compelled to deposit it.

(2) Board of Executive Directors:

There is a Board of Executive Directors to manage the day to day activities of the World Bank. There are 21 members in this board. At present there are 24 members in it. Out of these 6 members are from those countries which have the maximum quota. The remaining members are from other countries.

An Advisory Council is organised by the Board of Executive Directors of the World Bank. It has at least 7 members. These members are specialists from different fields such as-banking, commerce, industries, agriculture, Labour etc. The committee is organised in such a way that it has representation of at least one meeting of this council during a year.

Various other committees are organised by the Board of Executive Directors to perform different tasks properly. These, include-Development Committee, Joint Audit Committee, Cost and Budget Committee, Committee on Directors Administrative Matters etc.

In the initial phase, India was one among the five countries which had a good share in the capital of the World Bank. So, it had the light of choosing an executive director. But in the later phase the quota of other countries surpassed India’s quota.

The World Bank had given India an instant help of 300 million dollar after the Gujarat Earthquake. Long term loans have been continuously granted to India for communication, education, irrigation, electric power, population control, poverty, alleviation, rural development, infrastructural development etc. to promote the speed of India’s development. India has received maximum loan for the development of railways. The first loan received for this project in 1949 was worth 34 million dollar.

An “Indian Assistance/Help Club” was set up in 1558 to provide economic assistance in the second and third five year plans in which there were ten countries of International Development Federation along with the World Bank. The club meeting had positive attitude in granting assistance to India. Later on this club was renamed as “India Development Forum.”

By the financial year ending June 2005, the World Bank had granted total loans of 22.3 billion dollar for 279 projects in different countries; out of which only 2.89 billon dollars was given to India. The World Bank granted loan of India for the Power grid Corporation of India, a loan amount of 40 crore dollars in January 2006. Similarly, a loan of 4.9 billion dollars has been approved for year 2009-10.

Thus, the World Bank has played an important role in the development of India. Due to a good repayment reputation there is a good possibility of getting co-operation from World Bank in future as well.

Although, the World Bank has been successful in fulfilling its objectives, but the critics have criticized it on various grounds.

The main criticisms of the world bank are as follows:

(1) High Rates of Interest and Commission:

The Critics held that the World Bank is a non-profit earning institution. Despite this it takes interest on high rates from the member countries. It charges 7.6 percent interest on loans and 1 to 2 percent service tax, which is very high for the underdeveloped countries.

This has been a continuous charge against the World Bank that its financial resources are not sufficient to fulfill the needs of member countries due to which the Bank is unable to give sufficient help to developing countries. But now there is no ground for this criticism because, the Bank has increased its capital limit by increasing the quota of the member countries.

It is also a part of criticism against the World Bank that it checks very strictly the repayment ability of the concerned country before granting loans. Actually it is not a modern trend of the World Bank. It is unscientific for any developing country.

The capacity of repayment of the developing countries is automatically reduced after taking loans. Thus, the Bank should look into only that whether the project for which the loan is being granted is productive or not. The World Bank definitely keeps an eye on the use of the loan.

(5) Loan for Specific Project Only:

The critics held that the World Bank grants loan only for specific project, while the underdeveloped countries need loans more for their general development.

(6) Emphasis on Repayment in Foreign Money:

It has also been a charge against the World Bank that it makes it compulsory to repay its loans in gold or in the currency of that country only, in which the loan has been taken. It is rather a strict condition for developing countries.

The critics held that the process of granting loans by the World Bank is very complicated due to which much delay is made in sanctioning loans. Sometimes due to delay the proper utility of the project is spoiled. But it can be said against this criticism that the World Bank is not the bank of any particular country and representing so many countries at a time is not easy task.

Despite these criticisms it can be said the World Bank is an extremely useful organisation.