The efficient management of a business firm requires an optimal or best solution out of the available courses of action for a firm.

This efficient or optimal decision making requires establishing the goal or objective to be achieved.

Whether a management decision is optimal or not can be evaluated against the goal or objective that the firm seeks to achieve.

In traditional economic model of the firm it is assumed that a firm’s objective is to maximise short-run profits, that is, profits in the current period which is generally taken to be a year. In various forms of market structure such as perfect competition, monopoly, monopolistic competition the traditional microeconomic theory explains the determination of price and output by assuming that firm’s aim is to maximise current or short-run profits. This current short-run profit maximisation model of the firm has provided decision makers with useful framework with regard to efficient management and allocation of resources.

It is to state here that economic profits is the difference between total revenue and economic costs. Thus,

Therefore, point B at which TR curve cuts TC curve is called break-even point. Beyond this break-even level of output positive profits start accruing to the firm as it expands its level of output. Profits go on increasing till output level OQ is reached. It will be seen from the upper part of Figure 2.1 that at output OQ, the difference between total revenue and total cost is maximum, that is, JH is the largest distance between the TR and TC curves.

Therefore, JH is the maximum profits that can be earned by the firm, given the total revenue and total cost conditions.

That the profits are maximum at output level OQ can be shown mathematically as under:

d (TR) /dQ and d(TC) dQ and are the slopes of TR and TC curves respectively.

In the lower part of Figure 2.1 we have drawn a total profit curve TP which first rises and then beyond point N (corresponding to output level OQ) it starts falling indicating that profits are maximum at output level OQ. 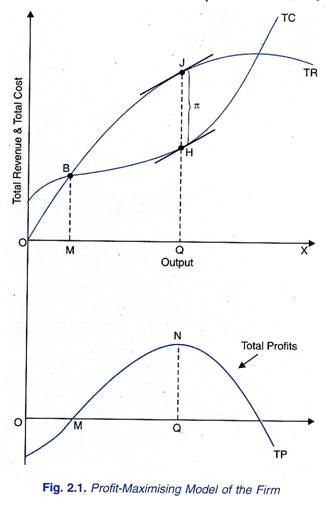 It can be seen from the upper part of Figure 2.1 that profits start declining as output is expanded beyond OQ. Therefore, a firm which aims to maximise profits will produce output level of OQ, and will charge a price of its product which buyers are prepared to pay depending on the demand conditions.

Since price or average revenue equals total revenue divided by a level of output, price charged by the firm at output level OQ is given TR/OQ or QJ/OQ

The simple profit-maximizing model of the firm provides very useful guidelines for the decision making by the firm with regard to efficient resource management.

Thus, any business decision by a firm will increase its profits if the following conditions prevail:

3. It reduces cost more than it reduces revenue.

Despite the merits of the profit maximising model of the firm, it has two important limitations. First, it does not incorporate time dimension in the decision-making process by the firm. Secondly, it does not analyse the firm’s behaviour under conditions of risk and uncertainty. The modern model of the firm known as ‘Firm’s value Maximization Model ‘or Shareholder’s wealth Maximising Model’ overcomes these limitations by incorporating time dimension into the managerial decision-making process. This model also considers risk involved in business decision-making.