The below mentioned article provides an overview on the Profit Maximisation Theory.

In the neo-classical theory of the firm, the main objective of a business firm is profit maximisation. The firm maximises its profits when it satisfies the two rules. MC = MR and the MC curve cuts the MR curve from below Maximum profits refer to pure profits which are a surplus above the average cost of production.

It is the amount left with the entrepreneur after he has made payments to all factors of production, including his wages of management. In other words, it is a residual income over and above his normal profits.

The profit maximisation condition of the firm can be expressed as:

where p (Q) is profit, R(Q) is revenue, С (Q) are costs, and Q are the units of output sold The two marginal rules and the profit maximisation condition stated above are applicable both to a perfectly competitive firm and to a monopoly firm.

The profit maximisation theory is based on the following assumptions:

1. The objective of the firm is to maximise its profits where profits are the difference between the firm’s revenue and costs.

2. The entrepreneur is the sole owner of the firm.

3. Tastes and habits of consumers are given and constant.

4. Techniques of production are given.

5. The firm produces a single, perfectly divisible and standardised commodity.

6. The firm has complete knowledge about the amount of output which can be sold at each price.

7. The firm’s own demand and costs are known with certainty.

8. New firms can enter the industry only in the long run. Entry of firms in the short run is not possible.

9. The firm maximises its profits over some time-horizon.

10. Profits are maximised both in the short run and the long run.

Given these assumptions, the profit maximising model of the firm can be shown under perfect competition and monopoly.

Under perfect competition, the firm is one among a large number of producers. It cannot influence the market price of the product. It is the price-taker and quantity-adjuster. It can only decide about the output to be sold at the market price.

Therefore, under conditions of perfect competition, the MR curve of a firm coincides with its AR curve. The MR curve is horizontal to the X-axis because the price is set by the market and the firm sells its output at that price.

The firm is, thus, in equilibrium when MC = MR = AR (Price). The equilibrium of the profit maximisation firm under perfect competition is shown in Figure 1. Where the MC curve cuts the MR curve first at point A.

It satisfies the condition of MC = MR, but it is not a point of maximum profits because after point A, the MC curve is below the MR curve. It does not pay the firm to produce the minimum output when it can earn larger profits by producing beyond OM. 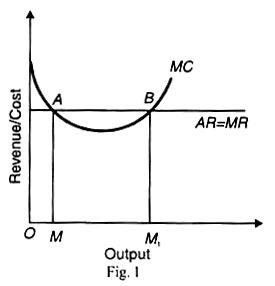 It will, however, stop further production when it reaches the OM1 level of output where the firm satisfies both conditions of equilibrium. If it has any plans to produce more than OM1 it will be incurring losses, for the marginal cost exceeds the marginal revenue after the equilibrium point B. Thus the firm maximises its profits at M1B price and at the output level OM1.

There being one seller of the product under monopoly, the monopoly firm is the industry itself. Therefore, the demand curve for its product is downward sloping to the right, given the tastes and incomes of its customers. It is a price-maker which can set the price to its maximum advantage. But it does not mean that the firm can set both price and output. It can do either of the two things.

If the firm selects its output level, its price is determined by the market demand for its product. Or, if it sets the price for its product, its output is determined by what consumers will take at that price. In any situation, the ultimate aim of the monopoly firm is to maximise its profits. The conditions for equilibrium of the monopoly firm are (1) MC = MR< AR (Price), and (2) the MC curve cuts the MR curve from below. 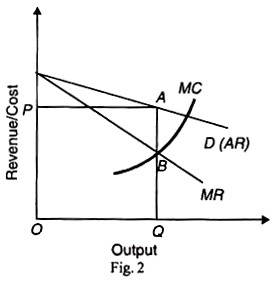 In Figure 2, the profit maximising level of output is OQ and the profit maximisation price is OP (=QA). If more than OQ output is produced, MC will be higher than MR, and the level of profit will fall. If cost and demand conditions remain the same, the firm has no incentive to change its price and output. The firm is said to be in equilibrium.

Criticism of the Profit Maximisation Theory:

The profit maximisation theory has been severely criticised by economists on the following grounds:

The principle of profit maximisation assumes that firms are certain about the levels of their maximum profits. But profits are most uncertain for they accrue from the difference between the receipt of revenues and incurring of costs in the future. It is, therefore, not possible for firms to maximise their profits under conditions of uncertainty.

2. No relevance to internal organisation:

This objective of the firm bears little or no direct relevance to the internal organisation of firms. For instance, some managers incur expenditures apparently in excess of those that would maximise wealth or profits of the owners of the firm. Managers of corporations are observed to emphasize growth of total assets of the firm and its sales as objectives of managerial actions.

The profit maximisation hypothesis is based on the assumption that all firms have perfect knowledge not only about their own costs and revenues but also of other firms. But, in reality, firms do not possess sufficient and accurate knowledge about the conditions under which they operate.

At the most they may have knowledge about their own costs of production, but they can never be definite about the market demand curve. They always operate under conditions of uncertainty and the profit maximisation theory is weak in that it assumes that firms are certain about everything.

The empirical evidence on profit maximisation is vague. Most firms do not rank profits as the major goal. The working of modem firms is so complex that they do not think merely about profit maximisation. Their main problems are of control and management.

The function of managing these firms is performed by managers and shareholders rather than by the entrepreneurs. They are more interested in their emoluments and dividends respectively. Since there is substantial separation of ownership from control in modern firms, they are not operated so as to maximise profits.

5. Firms do not bother about MC and MR:

Still others do not possess adequate information about their cost structure. Empirical evidence by Hall and Hitch shows that businessman have not heard of marginal cost and marginal revenue. After all, they are not greedy calculating machines.

Hall and Hitch found that firms do not apply the rule of equality of MC and MR to maximise short run profits. Rather, they aim at the maximisation of profits in the long run. For this, they do not apply the marginalistic rule but they fix their prices on the average cost principle.

According to this principle, price equals AVC+AFC+ profit margin (usually 10%). Thus the main aim of the profit maximising firm is to set a price on the average cost principle and sell its output at that price.

This is a serious weakness of the profit maximisation theory. In fact, decisions are ‘temporally interdependent’. It means that decisions in any one period are affected by decisions in past periods which will, in turn, influence the future decisions of the firm. This interdependence has been ignored by the neo-classical theory of the firm.

8. Not applicable to oligopoly firm:

As a matter of fact, the profit maximisation objective has been retained for the perfectly competitive, or monopolistic, or monopolistic competitive firm in economic theory. But it has been abandoned in the case of the oligopoly firm because of the criticisms levelled against it. Hence the different objectives that have been put forth by economists in the theory of the firm relate to the oligopoly or duopoly firm.

The basis of the difference between the objectives of the neo-classical firm and the modern corporation arises from the fact that the profit maximisation objective relates to the entrepreneurial behaviour while modern corporations are motivated by different objectives because of the separate roles of shareholders and managers. In the latter, shareholders have practically no influence over the actions of the managers.