In what follows we will focus on the use of differential calculus to solve certain types of optimisation problems.

Differential Calculus: The Concept of a Derivative:

When a change in the independent variable, that is, ∆X gets smaller and approaches ∆Y zero, ∆Y/ ∆X becomes better approximation of the slope the function, Y = ƒ (X), at a particular point. 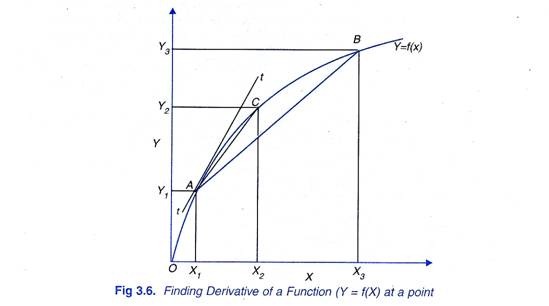 Similarly, if AX is reduced further, slope of the straight line between the two corresponding points will go on becoming closer and closer to the slope of the tangent tt drawn at point A to the curve. At the limit of ∆Y/∆X when ∆X approaches zero, slope of the tangent such as tt at a point on a function becomes the derivative of the function with respect to X.

Thus, derivative dY /dX is slope of a function whether it is linear or non-linear and represents a change in the dependent variable due to a small change in the independent variable. The concept of a derivative is extensively used in economics and managerial decision making, especially in solving the problems of optimisation such as those of profit maximisation, cost minimisation, output and revenue maximisation.