Managerial economics is concerned with decision making by managers of a firm.

Managers of a firm have to take decisions regarding the level of output of a product to be produced, the price for a product to be charged, the size of the sales force to be engaged, the technique to be used for the production, the level of advertising expenditure to be incurred and many other such things.

In business decisions making a large number of options are open to a manager from which he has to make a choice.

Obviously, a manager will try to make a best choice from among different options available to him. A best or optimum choice is one that best achieves the desired goal or objective of the firm. For example, a manager might consider what level of output of a product he should produce.

Manager will produce the level of output which maximises firm’s profit if he has set before himself the objective of profit-maximisation. This is a maximisation problem which he has to solve. Similarly, he may be considering choosing among the various combinations of factors or inputs that can be used for producing a level of output.

To maximise profits he will choose the combination of inputs that minimises cost for producing a given level of output. Evidently, this is a minimisation problem which he has to solve.

Mathematical formulations of these analytical models of managerial decision-making are expressed in terms of functions which describe economic relationship between various variables.

Therefore, to begin with we will explain the concept of a function and its various important types.

Where ƒ stands for function.

Where Dx is the quantity demanded of commodity X and Px is its price.

Similarly, supply function of a commodity X is expressed as

When the value of the variable Y depends on more than two variables X1,X2……………………………… Xn this function is written in general form as:

For example, demand for a product is generally considered to be a function of its own price, prices of other commodities (which may be substitutes or complements), income of the consumers, tastes and preferences of the consumers and advertising expenditure made by a firm to promote its product. Thus,

Dx = demand for the commodity X

Px = price of the commodity X.

M = income of the consumers

T = tastes and preferences of the consumer for the product.

A = advertising expenditure incurred by the firm.

We explain below some specific types of functions:

A widely used mathematical form of a function is a linear function.

A linear function can be stated in the following general form:

The minus sign before coefficient b indicates that quantity demanded of a commodity is negatively related with price of the commodity. That is, if price of a commodity falls, its quantity demand increases and vice versa. If a equals 7 and b equals 0.5, the linear demand function can be expressed in the following specific form: 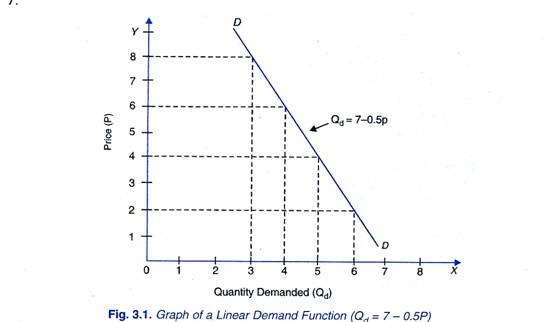 We can take various values of P and find out different quantities (Qd) of a commodity demanded at them. In Figure 3.1 we have plotted these price-quantity combinations on a graph and have obtained demand curve DD of the commodity representing the given demand function (Qd = 7 – 0.5P).

Linear demand function with more than one independent variables, can be written in the following way :

Where b1, b2, b3, b4 are the coefficients of the respective variables. In economics the effect of variables other than the own price of a commodity in the demand function are depicted by shifts in the demand curve. For instance when income (M) of the consumers increases consumers will demand more of the product X at a given price. This implies shifting of the demand curve to the right.

The linear multivariate function is written in the following form:

The linear functions stated above are known as first degree functions where the independent variables X1, X2, X3, etc are raised to the first power only. We now turn to explain power functions. In economics power functions of the quadratic and cubic forms are extensively used.

Quadratic functions are of two types:

It is worth noting that slope of the curve of convex quadratic functions as is evident from U-shaped graph in this case where coefficient of X2 is positive, slope is increasing everywhere. On the other hand, in case of concave quadratic function where coefficient of X2 is negative (c < O), slope of its graph is decreasing everywhere.

It should be further noted that in analytical geometry it is proved that graph of any quadratic function is a parabola which may be either convex or concave. A parabola is a curve which has a turning point and unlike the curve of a linear function, its slope is changing at different values of X.

In case of two independent variables X1 and X2 such a function may be expressed as under:

If such a function is graphically shown, it will be represented by a three – dimensional surface and not a two dimensional curve.

A cubic function may have the following form:

a is the intercept term, the dependent variable X has the first degree, second degree and third degree terms. When the signs of all the coefficients a, b, c and d are positive, then the values of V will increase by progressively larger increments as the value of X increases.

However, when the signs of various coefficients differ in the cubic function, that is, some have positive signs and some have negative signs, then the graph of the function may have both convex and concave segments depending on the values of the coefficients.

Such a cubic function where signs of the coefficients of variables differ may be expressed as follows: