In this article we will discuss about the importance of multiplier in the determination of national income. Also learn about the assumptions of the multiplier.

One of the central concepts of modern macroeconomics is the multiplier. The Keynesian income determination model shows how the interaction of consumption and investment spending determines the level of national output.

Clearly, an increase in investment will increase the level of output and employment. Thus, an investment boom may bring a nation out of a deep or mild depression—by having a higher C + I schedule cut the 45° line at a higher level of equilibrium GNP.

The multiplier is the number by which change in autonomous investment has to be multiplied to find out the resulting change in income. This amplified effect of investment on income is known as the ‘multiplier’.

The reason is simple enough. Since investment is one part of GNP, when it rises in value, the whole will also increase in value.

The Keynesian model of income determination shows that an increase in investment will increase GNP by an amplified or multiplied amount — by an amount greater than itself. This is so because investment spending is high-powered spending.

Assumptions of the Multiplier:

The Keynesian concept of multiplier is based on the following assumptions:

The Keynesian multiplier comes into op­eration for any autonomous (income-independent) change in spending.

The multiplier is derived on the assumption that taxes are lump-sum (once-for-all) only. If part of economy’s extra income is taxed away by the government, total leakages (i.e., the withdraws from the income flow) would rise and the value of the multiplier would be smaller.

It is also assumed that the economy is closed. The multiplier ignores all external economic transactions that could be signifi­cant for a country with a foreign sector.

The process of income propa­gation is largely conditioned by a steady flow of mass consumption goods.

For the realisation of the full effect of the multiplier it is absolutely essential that the various increments in investment are repeated at periodic intervals.

For the concept of the multiplier to be meaningful it is also necessary to argue that there is no change in MPC at frequent intervals, i.e., at least during the process of income generation.

(viii) No time lag between successive expenditures on consumption goods:

It is argued that income changes are immediately reflected in con­sumption changes. There is no lag between receipt of income and expendi­ture on consumption.

Finally, Keynes argued that the multiplier principle becomes effective only when there are unemployed resources in the economy. In other words, there must exist involuntary idleness of resources including manpower.

Limitations of (and Leakages from) the Multiplier:

Anything that leads to a fall in national income through the multiplier is to be considered as a leakage.

There are three such leakages:

The most important leakages from the circular flow of income are the following:

It is the most important leakage. If MPC = 1 and MPS = 0, the numerical value of the multiplier would approach infinity. This means that if the entire new income created by an act of investment at each stage of the income generation process were spent by the people on buying consumer goods, then even a once-for-all increase in investment would go on creating extra income until the economy reached the stage of full employment, But MPC is rarely equal to 1.

In practice, people hardly spend their entire income on consumption goods. They save a certain portion. The portion they save (i.e., do not spent) disappears from the circular flow, thus reducing the value of the multiplier. Thus, the stronger the MPS of the people, the smaller will be the value of the investment multiplier.

James Duesenberry has pointed out people do not spent their entire extra income on consumption goods. They use a part of it to repay their past debt. As a result, the value of tire multiplier gets reduced.

People often save money by keeping idle cash balances in banks. This idle money does not come into circulation and is unlikely to lead to an increase in consumption spending.

It is often observed that a major portion of the new income generated in the economy is utilised to buy old bonds and securities from others. Most people sell these long-term credit instru­ments when in distress and incur capital losses. So, such transactions are unlikely to raise society’s total consumption appreciably.

No country in the world is self-sufficient. Therefore, a country has to spend some money on imports. However, imports do not add to domestic expenditure and is unlikely to have any income and employment effect.

To the extent we spend a certain portion of our new income on imported goods, money leaks out of the country. In other words, the value of imports peters out of the income-stream, thus limiting the value of the multiplier.

During inflation money income may rise but real income falls. Thus, real consumption spending (which determines the value of the multiplier) will fall. In other words, a major portion of increased money income will be neutralised by price inflation, instead of stimulating consumption and creating jobs and incomes in the process.

The equilibrium value of GNP (or national income) in the typical Keynes­ian income-expenditure or 45° diagram framework is related to the aggre­gate supply- aggregate- demand model in Fig. 6. However, the Keynesian framework depicted in the top half of the diagram completely neglects price-level consideration. 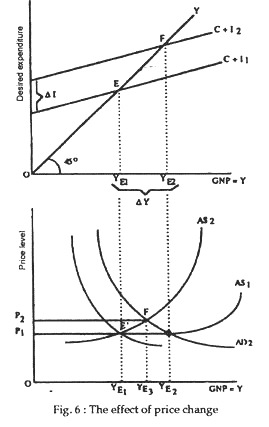 Instead, the Keynesian approach is based on the assumption that the relevant portion of the nation’s AS curve is horizontal, implying that the additional demand for goods and services is fully reflected in increased real output rather than partially reflected in higher prices. Fig.4 shows that when investment spending increases, the desired expenditure line shifts upward from C + I1 to C + I2. 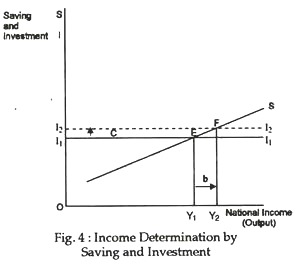 This is shown by point G. But there is no rise in the general price level (which is P1). However, the AS curve normally slopes upward from left to right. In fact, beyond a certain level of output (OYE1) the AS curve slopes upward as is indicated by the curve AS2.

In such a situation, equi­librium output and price both rise in the event of an increase in government expenditures, as is indicated by point F. Thus, in reality a part of the increased expenditure is manifested in higher prices rather than in higher real GNP.

As commented by Regan and Thomas, “The extent to which the initial increase in spending is dissipated in higher prices instead of greater real output depends on the state of the economy at a time the stimulus occurs. When the economy is initially operating far below capacity with consider­able unemployment, the aggregate supply curve is quite flat and almost all the increased spending results in increased real output. When the economy is initially operating fairly close to full capacity, the aggregate supply curve is quite steep. In this event much of the increase in spending is reflected in higher prices.”

If the government taxes away a certain portion of the extra income generated in the economy the value of the multiplier will fall. So, like savings, taxes also act as a leakage from the circular flow. Taxes are contractionary in their effects inasmuch as they reduce real consumption spending by reducing disposable income.

All modern economies rely on progressive income taxes for raising revenue and reducing income inequality. Thus, as GNP begins to rise because of a shift in spending, part of the extra GNP is taken away by the government in the form of income taxes.

Given an MPC of 0.8 the individual adds only 48 paise to national income (GNP) through his secondary consumption spending (0.8 x 60). Thus, James F. Ragan and L.B. Thomas have rightly commented: “The effective MPC out of GNP is reduced by the existence of income taxes, and the true multiplier is reduced considerably relative to a society with no income taxes.”

Moreover, companies do not always distribute their entire net profit (gross profits less corporation tax) as dividend. They retain a certain portion for expansion and diversification. To the extent they follow the policy of saving a certain portion of their net profits, the consumption spending of shareholders fails to increase correspondingly. Therefore, the value of the multiplier will be less than otherwise.

Again, there is the indirect effect on investment of a rise in the rate of interest by raising GNP. Let us assume that consumer spending or government expenditure increases. This will imme­diately lead to an increase in GNP. This, in turn, is likely to induce an increase in the desire to borrow (although Keynes ignored induced invest­ment and considered only autonomous investment).

Thus, “the initial expansion of consumption or government spend­ing, by driving up GNP and interest rates, may crowd out some investment spending. If so, part of the extra GNP (in the form of government goods and consumption goods) is offset by the reduced output of investment goods. In this event, the true multiplier is not as the simple multiplier.”

In practice, however, things are not that simple. Fig. 7 is a typical investment demand schedule indicating the relationship between interest rates and investment spending, when all other factors influencing invest­ment are assumed to remain unchanged. 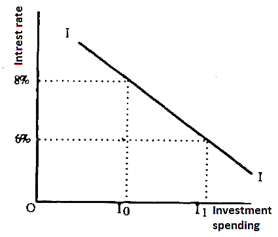 However, with an increase in GNP in response to the initial increase in spending, the business outlook tends to improve and the rate of utilisation of existing capacity also increases. These factors will shift the investment demand curve of Fig. 7 to the right. This means that investment spending may increase in spite of the higher interest rates.